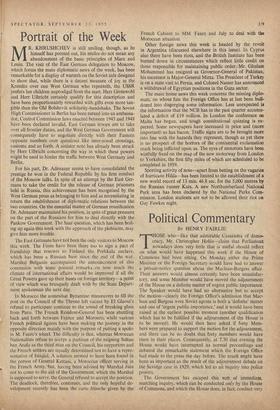 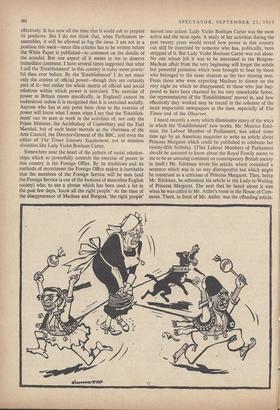 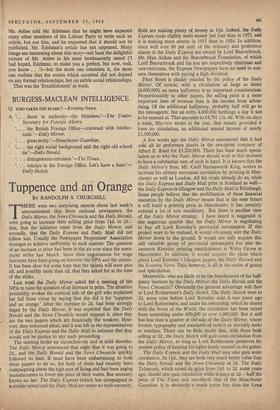 BY HENRY FAIRLIE HOSE who—like that admirable Cassandra of demo- cracy, Mr. Christopher Hollis--claim that Parliament nowadays does very little that is useful should reflect on what would have happened this week if the House of Commons had been sitting. On Monday either the Prime Minister or the Foreign Secretary would have had to answer a private-notice question about the Maclean-Burgess affair. Their answers would almost certainly have been unsatisfac- tory, and some Member would have moved the adjournment of the House on a definite matter of urgent public importance. The Speaker would have had no alternative but to accept the motion—clearly the Foreign Office's admission that Mac- lean and Burgess were Soviet agents is both a 'definite' matter and one of 'urgent public importance,' and it would have been raised at the earliest possible moment (another qualification which has to be fulfilled if the adjournment of the House is to be moved). He would then have asked if forty Mem- bers were prepared to support the motion for the adjournment, and there can be no doubt that forty members would have risen in their places. Consequently, at 7.30 that evening the House would have interrupted its normal proceedings and debated the remarkable statement which the Foreign Office had made to the press the day before. The result might have been as important as the result of the adjournment debate on the Savidge case in 1929, which led to an inquiry into police powers.

• The. Government has escaped this sort of immediate, searching inquiry, which can be conducted only by the House of Commons, and which the House does, in fact, conduct very effectively. It has now all the time that it eould ask to prepare its positions. But I do not think that, when Parliament re- assembles, it will be allowed to fog the issue. I am not in a position this week—since this column has to be written before the White Paper is published—to comment on the details of the scandal. But one aspect of it seems to me to deserve immediate comment. I have several times suggested that what I call the 'Establishment' in this country is today more power- ful than ever before. By the 'Establishment' I do not mean only the centres of official power—though they are certainly part of it—but rather the whole matrix of official and social relations within which power is exercised. The exercise of power in Britain (more specifically, in England) cannot be understood unless it is recognised that it is exercised socially. Anyone who has at any point been close to the exercise of power will know what I mean when I say that the 'Establish- ment' can be seen at work in the activities of, not only the Prime Minister, the Archbishop of Canterbury and the Earl Marshal, but of such lesser mortals as the chairman of the Arts Council, the Director-General of the BBC, and even the editor of The Times Literary Supplement, not to mention divinities like Lady Violet Bonham Carter.

Somewhere near the heart of the pattern of social relation- ships which so powerfully controls the exercise of power in this country is the Foreign Office. By its traditions and its methods of recruitment the Foreign Office makes it inevitable that the members of the Foreign Service will be men (and the Foreign Service is one of the bastions of masculine English society) who, to use a phrase which has been used a lot in the past few days, 'know all the right people.' At the time of the disappearance of Maclean and Burgess, 'the right people' moved into action. Lady Violet Bonham Carter was the most active and the most open. A study of her activities during the past twenty years would reveal how power in this country can still be exercised by someone who has, politically, been stripped of it. But Lady Violet Bonham Carter was not alone. No one whose job it was to be interested in the Burgess- Maclean affair from the very beginning will forget the subtle but powerful pressures which were brought to bear by those who belonged to the same stratum as the two missing men. From those who were expecting Maclean to dinner on the very night on which he disappeared, to those who just hap- pened to have been charmed by his very remarkable father, the representatives of the 'Establishment' moved in, and how effectively they worked may be traced in the columns of the more respectable newspapers at the time, especially of The Times and of the Observer.

I heard recently a story which illuminates many of the ways in which the 'Establishment' now works. Mr. Maurice Edel- man, the Labour Member of Parliament, was asked some time ago by an American magazine to write an article about Princess Margaret which could be published to celebrate her twenty-fifth birthday. (That Labour Members of Parliament should be assumed to know about the Royal Family seems to me to be an amusing comment on contemporary British society in itself.) Mr. Edelman wrote his article, which contained a sentence which was in no way disrespectful but which might be construed as a criticism of Princess Margaret. Then, being Mr. Edelman, he submitted his article to the Lady-in-Waiting of Princess Margaret. The next that he heard about it was when he was called to Mr. Attlee's room in the House of Com- mons. There, in front of Mr. Attlee, was the offending'article. Mr. Attlee told Mr. Edelman that he might have expected many other members of the Labour Party to write such an article, but not him, and he requested that it should not be published. Mr. Edelman's article has not appeared. Many things are interesting about this story—not least the delightful picture of Mr. Attlee in his most headmasterly mood CI had hoped, Edelman, to make you a prefect, but now, well, you know . . .')—but the more one considers it, the more one realises that the events which occurred did not depend on any formal relationships, but on subtle social relationships.

That was the 'Establishment' at work.