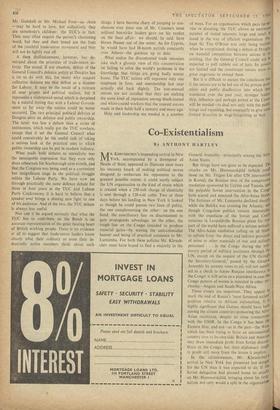 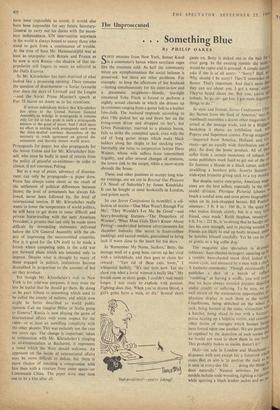 MR. KHRUSHCHEV'S impending arrival in New York, accompanied by a downpour of Heads of State, appeared to illustrate once more his uncanny knack of making political moves designed to embarrass his opponents to the greatest possible extent; it could surely subject the UN organisation to the kind of strain which is created when a 250-volt charge of electricity is sent through a 120-volt cable. Two or three days before his landing in New York it looked as though he could pursue two lines of policy, the one complementing the other: on the one hand, the conciliatory line on disarmament to gain propaganda advantage; on the other, the tough line on the Congo intended to produce material gains—by waving the anti-colonialist banner and being of practical assistance to Mr. Lumumba. For both these policies Mr. Khrush- chev must have hoped to find a majority in the

But things have not gone as he expected. The attacks on Mr. Hammarskjiild (which real those on Mr. Trygve Lie after UN intervention in Korea), the Russian veto of the compromise resolution sponsored by Ceylon and Tunisia. and the palpable Soviet intervention in the Conks both scared and annoyed the Afro-Asian States' The fortunes of Mr. Lumumba declined sharply while the Baltika was crossing the Atlantic; and though Congolese politics remain inscrutable, with the expulsion of the Soviet and Czech missions in Leopoldville Russian plans for that part of the world have suffered a serious setback' The Afro-Asian resolution calling on all States to refrain from 'the direct and indirect provision of arms or other materials of war and military personnel . . . in the Congo during the tor porary period of military assistance through the UN, except on the request of the UN through the Secretary-General,' passed by the General Assembly by seventy votes to nil, will not merely act as a check to future Russian interference In the Congo; it will serve as a precedent in cast the Congo pattern of events is repeated in other let ritories—Angola and South-West Africa.

These events are important. They appear to mark the end of Russia's 'most favoured nation position relative to African nalionalisin. II Is highly significant that Guinea should have been among the sixteen countries sponsoring the MN' Asian resolution, despite its close connections with the USSR. In the Congo it haS been the Eastern bloc, and not—as in the past—the West; which has been trying to force an uncommitted country over to its own side. Britain and America may draw immediate profit from Soviet (fiscally More in the Congo, but their diplomacy ought to profit still more from the lesson it implies.. In the circumstances, Mr. Khrushchev s arrival in New Yolk has presented less danger for the UN than it was expected to do. If the Soviet delegation had pressed home its attacks on Mr.'Hammarskjold, bringing about his resit' nation, not only would a split in the organisation have been impossible to avoid; it would also have been impossible for any future Secretary- General to carry out his duties with the neces- sary independence. UN intervention anywhere in the world is always bound to annoy those who stand to gain from a continuance of trouble. At the time of Suez Mr. Hammarskjold was at least as unpopular with Britain and France as he now is with Russia—the shadow of that un- popularity still lingers in many an editorial in the Daily Express.

So Mr. Khrushchev has been deprived of what looked like a promising opening. There remains the question of disarmament—a Soviet favourite ever since the days of Litvinoff and the League —and the Soyiet Prime Minister's speech at Pier 73 leaves no doubt as to his intentions.

If certain individuals declare that Khrushchev has come td the United Nations General Assembly to indulge in propaganda it remains only for me to take pride in such a propaganda mission to the good of peace. And I shall spare no effort in making such propaganda until even the thick-skulled convince themselves of the necessity to reach agreement on general dis- armament and thereby ensure world peace.

Propaganda for peace; but also propaganda for the Soviet Union and for Mr.. Khrushchev him- self, who must be badly in need of returns from the policy of peaceful co-existence—in order to silence, if not convince, Peking.

But as a way of peace, advocacy of disarma- ment can only be propaganda—a paper dove.

Peace has always come about as the result of the settlement of political differences between States; the level of armaments has always fol- lowed, never been followed by, the level of international tension. If Mr. Khrushchev really wants to lower the temperature of world politics, he will have to get down to some difficult and private horse-trading with the next American President, a process that can only be made more difficult by resounding statements delivered before the UN General Assembly with the ob- ject of impressing the uncommitted countries.

Nor is it good for the UN itself to be made a forum where competing sides in the cold war put forward plans which are intended only to impress. Despite what is thought by many of those engaged in politics, institutions become discredited in proportion to the amount. of hot air they produce.

Yet though Mr. Khrushchev's visit to New York is for cold-war purposes, it may none the less be useful that he should go there. By doing so he pays tribute to something which used to be called the comity of nations, and which now might be better described as world public opinion. Can we imagine Hitler or Stalin going to Geneva? Russia is now playing the game of international affairs with some respect for the rules—or at least an unwilling complicity with the other players. This was certainly not the case ten years ago. The change is important; taken in conjunction with Mr. Khrushchev's clinging to co-existentialism at Bucharest, it represents a trend which the West should welcome. An opponent on the inside of international affairs may be more difficult to defeat, but there is more chance of reaching a compromise with him than with a creature from outer space—or Communist China. The paper dove may turn out to be a kite after all.