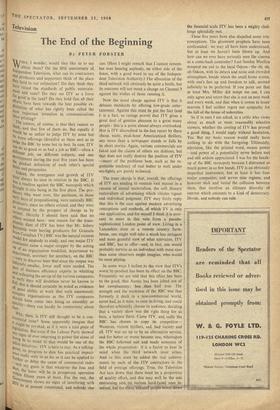 The End of the Beginning

By PETER FORSTER THAT, I wonder, would they like us to say about them? On the fifth anniversary of Independent Television, what can its contractors and producers and supporters think of the place they hold in our estimation? Do they think they have raised the standards of public entertain- ment and taste? Do they see ITV as a force for good in the land? Do they hold that all their efforts have been towards the best possible ex- ploitation of what has rightly been called the Most important invention in communications Since printing? L The answer, of course, is that they cannot so think, and that few of them do. But equally it W ould be as unfair to judge ITV by none but its Worst offerings (dreadful as these are) as to Judge the BBC by none but its best. In sum, ITV can do as good or as bad a job as BBC—often a different job, on different subjects, and one the during the past five years has been ',sue gradual definition of each other's special fields and perquisites. Indeed, the emergence and growth of ITV must always be seen in relation to the BBC. It „, "as a reaction against the BBC monopoly which bPoght it into being in the first place. The pro- 'kersI. wuo went over, like partisans, in those early days of propositioning, were naturally BBC Producers, since no others existed, and they were as tempted by the prospect of change as by money, (Strictly I should have said that no Others existed here: one reason for the trans- atlantic slant of ITV has been that Mr. Sidney Bernstein went buying producers for Granada from Canadian TV.) BBC was the natural' existent model for anybody to study, and one major ITV contractor came a major cropper by the setting up of an organisation modelled, department by department, secretary for secretary, on the BBC --(111Y to discover later that since the output was smaller, fewer staff were needed. The :art of business efficiency experts in whittling illd reshaping the set-up of the various companies nearly days will doubtless never be known in full. But it should certainly be noted as evidence o great ability at work that such enormously complex organisations as the ITV companies Should have come into being so smoothly so quick' that. Y—there can hardly be controversy about ,.. Why, Then, is ITV still thought to be a con- i°versial issue? Some apparently imagine that l_ might be revoked, as if it were a trial piece of avgislation. But even if the Labour Party showed any• signs of ever returning to power (let alone of 721:18 fit to wield it) that would be one of the 1351011!,er delusions: ITV is here to stay. As a talking- anint, its progress to date has practical import- ,.0 ce really only in so far as it can be applied to 1 rther or delay the cause of commercial radio --,uand my guess is that whatever the fuss and Quist, the latter will be in prosperous operation th• in fifteen years at most. For the rest, the i.rOnvernment shows no signs of interfering with v as at present constituted, and nobody else can. (Here I might remark that fcannot remem- ber ever hearing anybody, on either side of the fence, with a good word to say of the Indepen- dent Television Authority.) The allocation of the third network will obviously be quite a battle, but its outcome will not mean a change on Channel 9 against the wishes of those running it.

NoW the usual charge against ITV is that it debases standards by offering low-grade enter- tainment. Against this must be put the fact (and it is a fact, as ratings prove) that ITV gives a great deal of genuine pleasure to a great many people: this is a point almost always overlooked. Nor is ITV discredited in the last resort by these cheap, nasty, peak-hour Americanised thrillers, any more than a newspaper stands or falls by its short stories. Again, various commercials are faked and the claims of others are dubious, but that does not really destroy the position of ITV —many of the problems here, such as the re- grettable tendency of real butter to melt under arc-lights, arc purely technical.

The truer charge is that, overall, the offerings of ITV are tending to ensnare vast masses in a cocoon of unreal materialism, the soft illusory materialism of advertising which vitiates vigour and individual judgment. ITV may fairly reply that this is the case against modern advertising conceptions and methods, of which TV is only one application, and for myself I think it is over- easy to sneer in this vein from a pseudo- sophisticated London point of view. Living in a Lancashire slum or a remote country farm- house, one might well take a much less stringent and more grateful view 'of what television, ITV and BBC, has to offer—and, in fact, one would probably survive as an individual with more ease than some observers might imagine, who would be most pitying.

In some ways I incline to the view that ITV's worst by-product has been its effect on the BBC. Frequently we are told that this effect has been to the good, that Auntie has been jolted out of her complacency: less than half true. The strength and the weakness of the BBC was that formerly it dealt in a non-commercial World, never had, as it were, to earn its living, and could therefore arbitrarily choose its audience, deciding that a variety show was the right thing for us here, a lecture there. Came ITV, and sadly the BBC has chosen to copy its competitor— Westerns, violent thrillers, sad, bad variety and all. ITV was set up to be an alternative service, and for better or worse became one, whereupon the BBC followed suit and made nonsense of the whole proposition : it is a factor to bear in mind when the third network issue arises. And to this must be added the real achieve- ments by each of the ITV contractors in the. field of prestige offerings. True, the Television Act lays down that there must be a proportion of quality effort, and this may well be the sole restraining rein on Various hard-faced ones in- volved, but for many talented people lower down the financial scale ITV has been a mighty chal- lenge splendidly met.

These five years have also dispelled some mis- conceptions. The gloomiest prophets have been confounded : we may all have been undermined, but at least we haven't been blown up. And how can we ever have seriously seen the cinema as a come-back contender? Last Sunday Marilyn tempted me out to the local Odeon—the oh, oh, oh Odeon, with its delays and noise and crowded atmosphere, beside which the small home screen, with one's feet up and freedom to talk, seemed infinitely to be preferred. If you point out that at least Mrs. Miller did tempt me out, I can only agree and retort that she is not on next week and every week, and that when it comes to lesser marvels I feel neither regret nor sympathy for the fall of the house of usherettes.

So if in sum I am asked, as a critic who views about as much as most reasonably selective viewers, whether the coming of ITV has proved a good thing, I would reply without hesitation, Yes. But my basic reason would really have nothing to do with the foregoing. Ultimately, television, like the printed word, means power —and power of a potentiality never before met and still seldom appreciated. I was for the break- up of the BBC monopoly because I distrusted so much power in so few hands. ITV is an obviously imperfect instrument, but at least it has four major companies, and serves nine regions, and however slick and venial the collusion between them, that involves an ultimate diversity of interest which amounts to a kind of democracy. Divide, and nobody can rule.