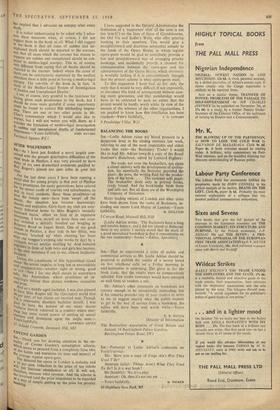 AFTER WOLFENDEN 0 uir t ,--- As I have just finished a novel

largely con- cerned with the present distributive difficulties of the Meat trade in Pimlico, I was very pleased to have nal' of my own dramatised comments justified by `Y Rogers's almost too sane letter in your last Issue.

Per the last three years I have been running a social club for young people in that part of Pimlico f here prostitutes, for many generations, have catered —or the sexual needs of tourists and suburbanites, as least as local residents. Since these prostitutes—at sheets, the female ones—have been 'swept' off the cleetx, the situation has become increasingly "antic and explosive. Girls from my club are com- rZaelY followed home by Miss Rogers's 'sexually pressed males,' either on foot or in expensive Iliel sousines. I have myself on more than one occa- Bein Watched a skilfully handled car beagling in e.`grave Road or Lupus Street. One of my good 0,ands in Pimlico, a dear lady in her fifties, was 8:55cenely 'touched up' while cleaning 'leer front

,"ePs one sunner's evening (she works by day) by a

„"Llegish sexual maniac strolling by. And indecent stoaPosure in front of both boys and girls has become, frequ ent. club members if not to me, almost laughably Unless s§ the inhabitants of this hypocritical island accept the sexual impulse at long last as unavoidable are unquenchable—whether right or wrong, good vil—then 1 for one shall escape to somelvhere 73, like Amsterdam, where prostitutes sit re- urin.„1- s y behind their picture windows, accessible and print toAtid as a middle-aged bachelor, I was also pleased have Miss Rogers tell the (Spectator) world that cent. of her clients are married men. Though „) a reasonably dissolute bachelor myself, I was r's.(1 to have the honour of my many decent 1;4_chelot friends retrieved in a country where mar- age e has some occult power of settling all sexual `,'"oesses and deviations upon the single man.— * urs faithfully,