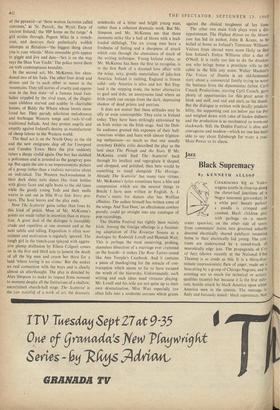 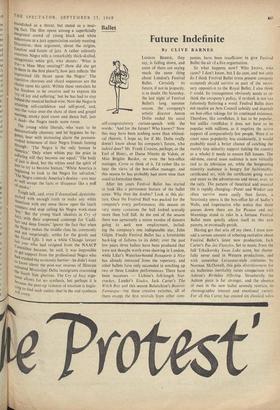 wagens scuttle in close-up along the clover-leaf junctions of a Negro tenement gas-cooker; in a white pets' beauty parlour a poodle is crimped and combed. Black children play with garbage on a moon- crater spare-lot; on the other side of town. from commuters' trains into groomed suburbs descend electrically shaved palefaces returning home to their electrically fed young. The con' trasts are underscored by a sound-track of neurotically edgy jazz. The propaganda of Cr.r of Jazz (shown recently at the National Film Theatre) is as crude as thii. It is a thirty-five- minute impressionistic flare of anger, made on 3 bass-string by a group of Chicago Negroes, and is arresting not so much for technical or artistic qualities (scanty) but because it is the first mili- tant, hostile attack by black America upon white America seen in the cinema. The message I' flatly and furiously stated : black supremacy. Not /\ brandished as a threat, but stated as a near- ing fact. The film opens among a superficially integrated crowd of young black and white bohemians at a jazz appreciation society meeting. Discussion. then argument, about the origins, function and future of jazz. A rather solemnly sonorous Negro tells a remarkably thick-skulled, antagonistic white girl, who shouts: `What is .''5—a Mau Mau meeting?' (how did she get in there in the first place?), how jazz reflects 'the improvised life thrust upon the Negro.' The repetitive choruses and chord sequences are the eLltains upon his spirit. Within these restraints he e. as freedom to be creative and to express his Cry of joy and suffering,' but he has had to stay behind the musical barbed-wire. Now the Negro is attaining self-confidence and self-proof, and, 4aYs the voice over •the shots of slum and gospel Meeting, smoky pool room and dance hall, jazz is dead—the Negro needs more room. The young white liberals, who want to be democratically chummy and let bygones be by- °nes, hear with increasing alarm the pressure- cooked bitterness of their Negro friends fuming through : `The Negro is the only human in America,' Only when whites pay the price in suffering will they become our equal,' The body °: f jazz is dead, but the whites need the spirit of /114 to try to become human,' White America is beginning to look to the Negro for salvation,' The Negro controls America's destiny—you may 4S well accept the facts or disappear like a puff of smoke.'

Tough talk, and, even if dramatised, dynamite- Packed with enough truth to make any white Anierican with any sense throw open the lunch `boy.' and stop calling his Negro work-mate , °Y.' But the young black idealists in Cry of iazz, with their expressed contempt for 'Cadil- 1,°,_es and deep freezes,' ignore the fact that when the Negro makes the middle class he, commonly and not surprisingly, settles for the goods and the Good Ljfe. met a white Chicago lawyer past Year who had resigned from the NAACP • - ornmittee because, he said, it was impossible to get support from the professional Negro who tgad crashed the economic barrier—he didn't want oo°,know about the post-war swarms of illiterate roured Mississibpi Delta immigrants cramming the South Side ghettoes. The Cry of Jazz argu- ent allows for no synthesis, but perhaps it is because the pent-up violence of emotion is begin- ning to find such outlets that in the end synthesis "come.