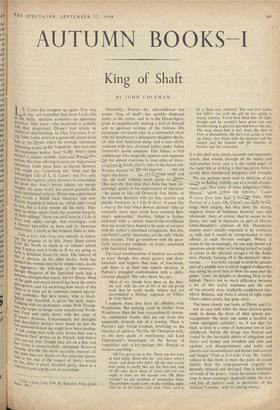 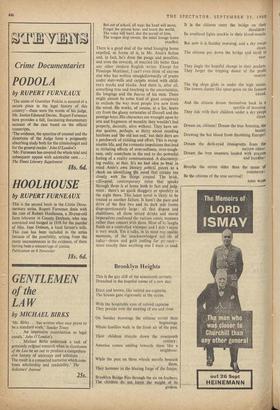 BY JOHN COLEMAN LS. CA-roN has cropped up again. You may ,or may not remember him from Lucky Jim as the shifty, spurious academic—an epistolary Presence, little more—who promised to publish, and .then plagiarised, Dixon's wan article on In, edmval ship-building. In That Uncertain Feel- 411ZkJohn Lewis received a green-ink scrawl from him it-thft “hrary where he worked, ominously requesting books o'r! -the Argenti ne : this went into the wastepaper basket. NoW,-i!.-111.Amis's latest novel,*,-,li -like,

a similar scribble, brief and War?.1.a

arrives, this time offering lectures on Argentinian ' education. Little piece here, as Garnet Bowen's wife might say—something like `Amis and the Submerged Life of L. S. Caton'—but I've only the his fugitive, jokey presence to consolidate `no point that Amis's heroes inhabit not merely .1.°LighlY the same world, but almost precisely the ?me intellectual milieux. Dixon was a provincial don, Lewis a Welsh local librarian; and now Patrick Standish is before us, rakish and vowed t,,° sex, but a Latin master all the same. They seem to strike sparks from the assumed integrity of their callings. There was no Caton in I Like It liere and, oddly enough, that travelogue, with a literary journalist as hero and its Jamcsian undertones, I recall as the weakest Amis to date.

Take a Girl Like You tries initially to follow filut the promise of its title. Jenny Bunn conies rrml the North to teach at an infants' school have London and it looks as if we are going to naye a feminine focus for once. The interest of this

is obvious. In his other books, Amis has Pushed the women into fairly simple roles, docile or

,, aggressive—the wife-type or the mistress— though Margaret of the lipsticked teeth had a neurotic strength that nearly did for Dixon. Most Pfthe guilt and moral turmoil has been the men's the and it's surprising how much of this ere is in what are by common consent uproar- I,)1!s comedies. But here Jenny, who is black- haired and beautiful, is given the early pages. „ Lodging with an auctioneer, soapy Dick Thomp- son, she hopes to forget some treacherous North- ern Fred and settle down with her copy of ! oman's Domain. Unfortunately her thoughts ;NI descriptive powers seem based on just the °,w-powered fiction she might have been reading. A tall young man with curly brown hair and a sunburnt face' proves to be Patrick, and before her can say Ann Temple they are on a datc and assaults virtue is unsuccessfully attempted. Renewed the provide the main narrative interest; all "fie male bees are drawn to this winsome queen; and at the end of the longest of Amis's novels se° far, after a great, dreadful party, there is a

duction and a grim sort of resolution.

Mercifully, Patrick—the self-confessed but erratic 'king of shaft'—has quickly displaced Jenny as the centre, and he is the Dixon-figure, given to magnificently making a fool of himself and to agonised scrutiny of his motives. His picaresque sex-jaunts take in a remorseful affair with his headmaster's delinquent daughter Sheila, all chin and American slang, and a near-idyllic weekend with two divorced ladies under Julian Ormerod's lavish auspices. This Julian, a rich sophisticate who magically appears and organises -fo for almost everyone (a loud echo of Gore-

Wimsey manner -gaheold fageroo . . . the old fag-o'-my-firkin . . . the (5,1:-!';'•“,rant weed' and 'the old scoff' without much pause r3i This isn't the first time that Amis has been un- nervingly quirky in his endorsement of character —he seems to like old Ormerod. One thinks of the tiresome Bannion with his fake accents and ghastly bonhomie in 1 Like It Here: it came like a slap in the face when Bowen claimed 'only an unusually nasty man could have resented Ban- nion's approaches.' Anyway, Julian is further endowed with a ruttish man-of-the-worldliness that one would have hoped to be quite at variance with his author's renowned stringencies. But this, and Jenny's perky innocence, are the only wholly false touches. They go somehow with the pecu- liarly starry-eyed emphasis on kisses, annotated with fascinated intensity.

The local manifestations of humour are as fine as ever, though, bits about geysers and door- knockers and kippers that taste of lion-house, and there is at least one superb set-piece in Patrick's strangled confrontation with a chilly, vacuous playgirl. She asks about his car:

'Most of my friends have them on the firm.' she said, with the sort of lift of the old proud head that he could hardly believe had not accompanied a limiting judgment on Villiers de lisle Adam.

I suppose Amis does have his affinities with Wodehouse. But nothing could be further from Wodehouse than the four extraordinarily drama- tic, embittered tirades that jut out from this apparently leisurely tale of a wooing. There is Patrick's ugly friend Graham, terrifying on the injustice of ugliness; Martha, the Thompson wife, on the slow death of matrimony; old Lord Edgerstoune's monologue on the horror of impotence; and-.---a key-passage, this—Patrick on modern courtship: 'All I've got to say is this. There arc two sorts

of men today, those who do—you know what I mean--and those who don't. All the ones you're ever going to really like are the first sort, and all the ones those ideas of yours tell you you ought to have are the second sort. Oh, there wouldn't he any problem of temptation there. The-problem would come on the wedding night. And on all the night; arter that. There used to he a third sort, admitted. The sort that could, but didn't--not with the girl he was going to marry, anyway. You'd have liked him all right, though, and he wouldn't have given you any trouble trying to get you into bed before the day. The snag about him is he's dead. He died in 1914 or thereabouts. He isn't ever going to turn up, Jenny, that bloke with the manners and the respect and the honour and the bunches of flowers and the attraction. . .

It is this dark note, harsh, accurate and repeatedly struck, that sounds through all the honey and high-pitched farce; and it is the rueful anger of the hand felt as striking it that has given Amis's novels their unexpected pungency and strength.

We are perhaps most used to thinking of his

n as flailing wilfully out at a world of culti- vated car,i. Not many of these judgments ('filthy Mozart,' 4sGIne viten old tapestry,' 'Under Western Eyes bim ban a "ir.:1.9.F bum. When Portrait of a Lady. Oh, Christ') are liketyl:,--4,1- lodge their targets, but they have the strong, negative virtue of freshness, however easy and wholesale. And, of course, they're meant to be funny, too, and in character as part of Dixon- Lewis-Standish's criticism of life. Demolition experts aren't usually expected to be architects as well, and it would be wrong-headed to take offence at such obvious outrages. Where, it seems to me increasingly, we can and should ask questions about what we're being invited to laugh at comes in the physical savagery of the Amis- hero. Patrick, 'turning off at the electricity show- rooms, . . . was lucky enough to send the greater part of a puddle over a sod in ragged clothes who was doing his level best to blow his nose into the gutter.' Later, he delights in shooting Dick in the behind. There's not so much difference between a lot of this joyful nastiness and the sort of war-atrocity story implicitly condemned else- where. Balance, and Amis is aware of tight-ropes where others aren't, has gone awry.

The more closely one looks at Dixon and Co. —not an easy task when the sheer farcical gusto tends to douse the force of their graver pre- occupations—the more one scents a reaction to 'some aboriginal calamity'; or, if not that far back, at least to a sense of innocence lost in late childhood, 'before the image was blurred and fouled by the inevitable debris of obligation and deceit and, money and boredom and jobs and egotism and disappointment and habit and parents and inconvenience and homes and custom and fatigue' (Take a Girl Like You). Mr. Amis's subject in this book is more the pains of sexual fidelity than the long-preserved virginity so heatedly- debated and besieged. One is reminded of much of his poetry, where his innate romanti- cism is most cunningly deployed under the lock and key of metrics—and, in particular, of the brilliant 'Lessons,' with its closing stanza:

But out of school, all ways the hand will move, Forget the private hour, and touch the world; The voice will bawl, slur the accent of love, The tongue slop sweets, the mind lounge home expelled.

There is a good deal of the mind lounging home expelled, or forms of it, in Mr. Amis's fiction and, in fact, he's done the pangs and penalties, and even the rewards, of married life better than any other modern English writer. Except for Penelope Mortimer, I can't even think of anyone else who has written straightforwardly of prams under stair-wells and carpets mined with child- ren's trucks and blocks. And there is, after all, something true and touching in the uncertainties, the longings and the fiascos of his men. There might almost be some kind of giant conspiracy to exclude the way most people live now from the novel. He works, of course, at a far, brave cry from the glassy certainties of Durrell and the prestige-boys. His characters are wrought upon by orts and fragments of morality they wouldn't feel properly, decently, alive without. They have un- due qualms, perhaps, at thirty about receding hairlines and 'the old last end,' but their days are a patchwork of yielding and effort. This is recog- nisable life, and the romantic impulsions that lead to irritating effects of over-softness, over-tough- ness, only contribute in the end to the powerful feeling of a reality communicated. A disconcert- ing reality, at that. It's no bad idea to bear in mind Amis's own literary critical pieces as a check on identifying the mind that creates too closely with the things created. The brisk, colloquial, contemporary voice that speaks through those is at home both to fact and judg- ment: there's no quick thuggery or spoofery in the night there. This latest novel is likely to be treated as another failure. It hasn't the pace and drive of the first two and its dark side looms disproportionately large: all that disgust and shabbiness, all those mixed drinks and moral imperatives confound the various comic manners rather than consort with them. Most of it; laughs finish on a controlled whimper and I didn't enjoy it very much. Yet it talks, in its most resr onsible moments, of the unacknowledged sub life of today—desire and guilt jostling for pri nacy- more exactly than anything else I want to read.