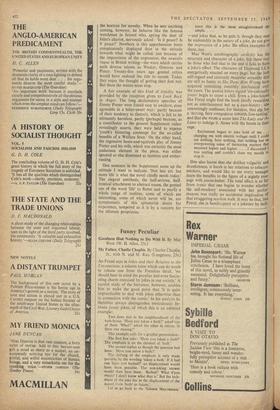 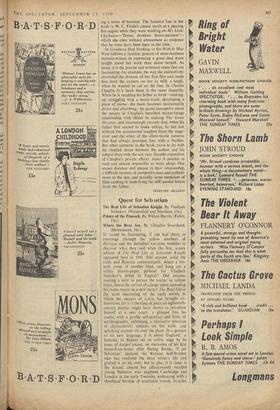 My Father, Charlie Chaplin. By Charles Chaplin, Jr., with N. and M. Rau. (Longmans, 25s.) As. Freud says in Jokes and their Relation to the Unconscious, a solemn tome which can do much to release one from the Freudian thrall, 'we should bear in mind the peculiar and even fascin- ating charm exercised by jokes in our society.' A careful study of the literature, however, enables him to make the good point that 'it is quite impracticable to deal with jokes otherwise than in connection with the comic.' In his analysis he therefore always distinguishes meticulously be- tween funny jokes, of which this is an admired example :

Two Jews met in the neighbourhood of the bath-house. 'Have you taken a bath?' asked one of them. 'What?' asked the other in return, 'is there one missing?'

This example calls for a graphic presentation: The first Jew asks: 'Have you taken a bath?' The emphasis is on the clement of 'bath.'

The second replies as though the question had been: 'Have you taken a bath?'

The shifting of the emphasis is only made possible by the wording 'taken a bath.' If it had run 'have you bathed?' no displacement would have been possible. The non-joking answer would then have been: 'Bathed? What d'you mean? I don't know what that is.' But the tech- nique of the joke lies in the displacement of the accent from 'bath' to 'taken.'

Let us go back to the 'Salmon Mayonnaise,' since this is the most straightforward ex' ample. . . .

—and jokes that, as he puts it, though they may be undeniably in the nature of a joke, do not give the impression of a joke. He offers examples of these, too.

Mae West's autobiography certainly has the structure and character of a joke, but there maY be those who feel that in the end it fails to have a joke's effect. The character of Diamond Lil is energetically enacted on every page, but the lush self-regard and curiously muscular sexuality that are still so funny in She Done Him Wrong have acquired something resistibly mechanical over the years. The quoted letters signed 'sin-sationallY yours' begin to cause a chill. Even a joke-hound like Freud might find the book chiefly rewarding not as entertainment but as a case-history: she interestingly confesses, for instance, that she has a 'driving, fiery compulsion towards lion-taming, and that she wrote a scene into The Lady and the Lions to indulge it. Alone with the beasts in their cage,

Excitement began to take hold of me . • • charging me with electric voltage until I could see nothing, hear nothing, feel nothing but an overpowering sense of increasing mastery that mounted higher and higher. . . . I discovered I was smiling and couldn't close my mouth to stop it. . . .

One also learns that she dislikes vulgarity and drunkenness, is harsh in her relations to tobacco- smokers, and would like to see every teenager learn the benefits to the figure of a nightly mas- sage with cocoa-butter. The total effect is so far from ironic that one begins to wonder whether the self-mockery associated with her perfor- mances was really an accidental implication of that swaggering sea-lion walk. It may be that, like Freud, she is handicapped as a jokester by lack-

mg a sense of humour. The funniest line in the book is W. C. Fields's casual insult at a passing fire-engine while they were working on My Little Chickadee—'Damn drunken house-painters'- which she cites without amusement as evidence that he must have been tipsy at the time.

in Goodness Had Nothing to Do With It Mae West follows a familiar pattern of show-business memoir-writers in expressing a great deal more insight about her work than about herself. As usual, it is the precise and technical notes that are fascinating: for example, the way she instinctively overruled the director of her first film and made him bold the camera on her to milk a laugh, when he wanted to cut on the line. In Charles Chaplin Jr.'s book there is the same disparity. When he is recalling his father at work—making- up, struggling with a music-track, developing a piece of mime—the book becomes momentarily direct and absorbing: he seems perceptive about the nature of Chaplin's horrified mirror-image relationship with Hitler in making The Great Dictator, and interestingly records that, when his father first started to make talkies, he felt lost without the accustomed laughter from the stage- crew and the whirr of the silent-movie cameras that had always provided him with a rhythm. But other elements in the book, more to do with the implied strain between the author and his subject than with the not very likeable exposition of Chaplin's private affairs, make it painful to read and almost impossible to write about. One senses distance and unease in their relationship, a difficult mixture of competitiveness and enthral- ment in the son, and possibly sonic suspicion of filial cashing-in underlying the stiff quoted letters from the father.