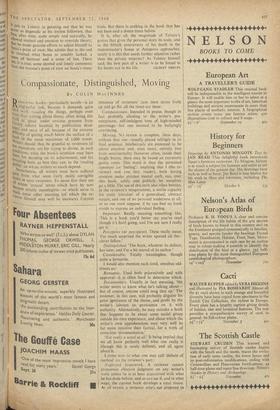 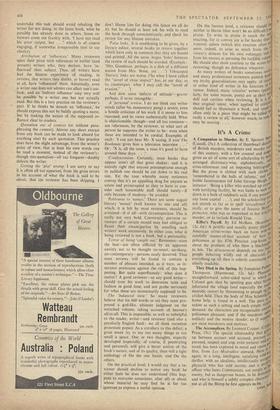 R,,,,,,„ IN i books—particularly novels—is an ,, ungrateful task, because it demands quite , "Ri work (reading the things, perhaps even T\hOre than writing about them); often doing this irk at speed under anxious pressure from i;lerarY editors haunted by publication dead- ti.nne,s; and most of all, because of the extreme bluiFilitY of getting much below the surface of a 1.,.°°,K in the usual maximum of 1,000 words.. writers should thus be grateful to reviewers Of not excessively so) for trying to divine, in such cb9nditions, what the book's intention may have re". for deciding on its achievement, and for he„\'e,aling both, as best they can, to the 'reading "le' on whom writers so much depend.

Nevertheless, all writers must have suffered pain from what seem fairly easily corrigible faults in most reviewers. To name first their use 13`. neuter 'critical' terms which have by now c°11.1e strictly meaningless—or which serve to mask some other meaning (of which the re- viewer himself may well be unaware). Current

instances of reviewers' cant (new terms froth up and go flat all the time) are these:

Compassionate. Intended in praise, though in fact probably alluding to the writer's pre- sumptuous, self-indulgent tone of high-minded patronage—but one deemed to be bullyingly convincing.

Moving. Na review is complete, these days, without that one—usually placed tellingly in its final sentence. Intellectuals are esteemed to be above emotion and, even more, entirely free from sentimentality (however often, inside their bright brains, there may be found an extremely gooey core). This word is thus the perMitted synonym for 'feeling': implying that I (the re- viewer) and you (my reader), both having emotion under strictest mental curb, can, over this book, safely and publicly let ourselves go a little. The use of this term also often betrays, in the reviewer's temperament, a sterile capacity for static 'emotion' of a generalised, abstract nature, and one of no personal tenderness at all; or so one must suppose, if he can find no fresh words to express an individual feeling.

Important. Really meaning something like, 'This is a book you'd better say you've read though it's hard going, and I'm not sure 1 really get it.'

Perceptive (or percipient). These really mean, 'I'm much surprised the writer spotted all this: clever fellow.'

Distinguished. 'The book, whatever its defects, has tone; and I'm a bit scared of its author.'

Considerable. Totally meaningless, though quite a favourite.

I would also mention such tired, omnibus old- timers as:

Romantic. Used both pejoratively and with approval—it is often hard to determine which.

Documentary. Usually in fact meaning, 'the writer seems to know what he's talking about— but of course, anyone could mug that up.' The reviewer, in this case, will probably disguise his prior ignorance of the theme, and profit by the writer's labours to pronounce on it with authority. Alternatively, he may mistake a book that happens to be about some social group outside his own experience, and about which the writer's own apprehensions may very well be far more intuitive than factual, for a work of conscious 'documentation.'

'Not really a novel at all.' It being implied that we all know perfectly well what one really is (though this is rarely defined>, and all agree abont'it.

come now to what one may call 'defects of method' on the reviewer's part :

work unless he is at least acquainted with what he has done before; and so can see if, and in what ways, the current book develops a total vision. At all events, a reviewer who's not prepared to undertake this task should avoid rebuking the writer for not doing, in the latest book, what he possibly has already done in others. Some re- viewers come out frankly with, 'I have not read his prior output, but . . .' which is of course engaging, if somewhat irresponsible (not to say cheeky).

Attribution of 'influences.' Many reviewers spice their piece with references to earlier (and present) writers who, they declare, have 'in- fluenced' their subject. Thus, all writers have had the bizarre experience of reading, in reviews, that writers they dislike, or haven't read at all, have 'influenced' them. Admittedly, even a writer one does not admire can affect one's out- look; and an 'indirect influence' may very well be possible by a writer one has not actually read. But this is a lazy practice on the reviewer's part. If he thinks he detects an 'influence.' he should express this not by baldly quoting a name, but by making the nature of the supposed in- fluence clear to readers.

Quotation out of context (or without para- phrasing the context). Almost any short extract from any book can be made to look absurd (or anything else) by such quotation.. This practice does have the slight advantage, from the writer's point of view, that at least his own words can be read a moment, instead of the reviewer's: though mis-quotation—all too frequent—doubly defeats the writer.

Getting the 'plot' wrong. I am sorry to say it is often all too apparent, from the gross errors in his account of what the book is said to be about, that the reviewer has been skipping. I

don't blame him for doing this (since we all do it), but he should at least ask his wife to read the book through conscientiously, and check his review for any blatant mistakes.

'False links: It is maddening to be given, by a literary editor, several books to review together

which have only in common that they are bound and printed. All the same, bogus 'links' between the review of each should be avoided. (Example: 'Mrs. Goodman. perhaps, is a dish of a different season from Mrs. Stone, yet . . .') Telescoped 'literary' links are worse. ('So what I have called the "novel of close impact" has, in our day, as its counterpart. what I may call the "novel of evasion." . . .') And now some 'defects of attitude'—graver perhaps, if more intangible:

A 'personal' review. I do not think any writer minds (after his momentary pang) a severe, even a hostile criticism of his work if it seems to him reasoned, and its views authentically held. What is objectionable. though—and all too common— are references, by the reviewer, to what sort of person he supposes the writer to be: even when these are intended to be cordial. Examples of each: 'I can just hear Mr. X saying. if ever The Bookman gives him a television interview . . Or: 'X is, all the same, a man it's good to have around these days. . .

Condescension. Certainly, most books that appear aren't all that great shakes: and it is entirely right that anyone presumptuous enough to publish one should be cut down to his real size. Yet the tone whereby many reviewers convey that it's an appalling drag for anyone as astute and preoccupied as they to have to con- sider such lamentable stuff should surely—if only because of modesty—be avoided.

Politeness to 'names.' There are some august literary 'names' (well known to one and all) which, it is felt by most reviewers, should be criticised—if at all—with circumspection. This is really not very bold. Conversely, perverse re- viewers of a certain mould may feel obliged to flaunt their emancipation by assailing such writers' work excessively. In either case, what is being reviewed is not a book, but a personality.

Terror of being 'caught out.' Reviewers—even the best—are often afflicted by an apparent anxiety not to be thought un-smart, un-sharp, un-contemporary—persons easily deceived. Thus most reviews will be found to contain a number of phrases intended, as it were, as in- surance premiums against the risk of this hap- pening. But quite superfluously: what does it matter? A good reviewer—as any good writer— should trust his work to determine taste and fashion in good time, and not probe nervously for what these are momentarily supposed to be.

The 'balanced view.' So many reviewers believe that (in 600 words or so) they must pro- pound a god-like, ultimate judgment on the wretched volume, taking account of heaven's all-in-all. This is impossible, as well as unhelpful to the reader, writer—and reviewer (and also a peculiarly English fault: we all think ourselves protestant popes). As a corollary to this defect, a great many try to Say too many things in too small a space. One or two thoughts, expertly developed (especially, of course, if penetrating and personal), will give a better notion of the book's nature, and of its quality, than will a tight anthology of On the one hands, and On the others.

On the practical level, I would say that a re- viewer should decline to notice any book he either feels he does not understand (this hap- pens to everyone sometimes, after all) or about whose material he may find he is far too ignorant ,to express a useful opinion.

On the human level, a reviewer should f neither to blame (that won't be so difficult!) praise. To write in praise is much the nor exacting, for to convey joy is far harder tharl,,1 transmit spleen (which dire emotion often n; seem, indeed, to arise as much from the viewer's distaste for his own voluntev task_: from his nausea at perusing the luckles vohn He should also show courtesy to the writer Be reviewing, though no deference whatever. 0.. As many writers of books sometimes revie and many professional reviewers publish bc)°ti ,,, my tetchy generalisations may apply, of cou're. to either kind of writer in his function 01,cir viewer. Indeed, many 'creative' writers (parts ,.,4 tarty, for some reason, poets) are at their rrlit/ dull and careless when reviewing. It is a ?„, that original talent, when applied to criticis"0 should fail to illuminate a book, and resalt4 often only in a piece that might be called really a review at all,' however much, in tone, may be moving. . . .