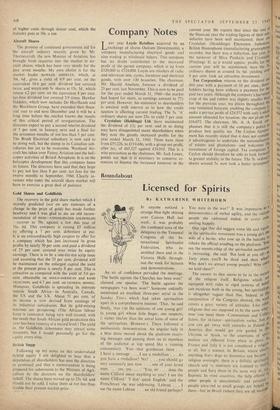 y AST year Loyds Retailers acquired by an L./exchange of shares Outram (Investments), a company manufacturing electrical goods and also trading as wholesale bakers. This company has no doubt contributed to the increased profit of the parent company, which is up from £520,000 to £724,000. Loyds are retailers of radio and television sets, cycles, furniture and electrical goods, with over 130 branches. The chairman, Mr. Harold Amelarn, forecast a dividend of 25 per cent. last November. This is now to be paid for the year ended March 31, 1960—the market had hoped for more, as earnings amount to 774 per cent, However, his statement to shareholders is awaited with interest as to how the credit squeeze is affecting current trading. The 5s. 'A' ordinary shares are now 25s. to yield 5 per cent. Crystalate (Holdings) Ltd. have maintained the dividend of 124 per cent. and in so doing may have disappointed many shareholders when they note the greatly increased profits for the year ended March 31, 1960. These have risen from £55.226, to £119,686, with a gioup net profit, after tax, of £65,527 against £34,910. This is a wise precaution as the chairman, Mr. Jack Lesser, points out that it is necessary to conserve re- sources to finance the increased turnover in the current year. He reports that since the end of the financial year the trading figures of their sub' sidiaries have been well maintained. these are Crystalate (Mouldings) Ebenostos Industries, British Homophone (manufacturing grarnophnnne records); but there was a reduction, last year in the turnover of Mica Products and Crystalate (Printing). If, as it would appear, profits for the current year will be maintained, then the Is' ordinary shares at around Is. 6d. yielding over 8 per cent. look an attractive investment. Tea Corporation returns to the dividend list this year with a payment of 10 per cent., share' holders having been without a payment for the past two years. Although the company's harvested crop of tea and rubber was slightly smaller than for the previous year, tea prices throughout the year remained buoyant, enabling the company t°1 make a pre-tax profit of £24,572 with only a sniali amount allocated for taxation; the net profit 0' £16,072. The chairman, Mr. A. A. Estall, Ow phasises that it is still the company's policy to produce best quality tea. The Ceylon Govern" ment has recently stated that it does not consider it advantageous to undertake the nationalisation of estates and plantations—and welcomes the investment of foreign capital. Tea companies to Ceylon should therefore be able to look forWatu, to greater stability in the future. The 5s. ordinal.)' shares around 3s. now look a better investment