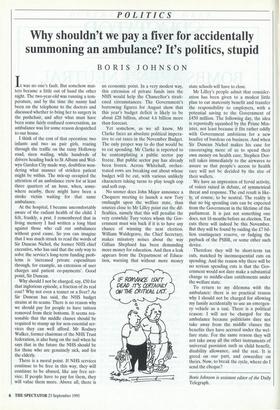 Why shouldn't we pay a fiver for accidentally summoning an ambulance? It's politics, stupid

It was no one's fault. But somehow mat- ters became a little out of hand the other night. The two-year-old was running a tem- perature, and by the time the nanny had been on the telephone to the doctors and discussed whether to bring her to surgery in the pushchair, and after what must have been some fairly confused conversation, an ambulance was for some reason despatched to our house.

I think of the cost of that operation: two infants and two au pair girls, roaring through the traffic on the rainy Holloway road, siren wailing, while hundreds of drivers heading back to St Albans and Wel- wyn Garden City made way, doubtless won- dering what manner of stricken patient might be within. The mix-up occupied the attention of an ambulance crew for at least three quarters of an hour, when, some- where nearby, there might have been a stroke victim waiting for that same ambulance.

At the hospital, I became uncomfortably aware of the radiant health of the child. I felt, frankly, a prat. I remembered that in living memory I had written a long blast against those who call out ambulances without good cause. So you can imagine that I was much struck to read the words of Sir Duncan Nichol, the former NHS chief executive, who has said that the only way to solve the service's long-term funding prob- lems is 'increased private expenditure through, for example, an extension of user charges and patient co-payments'. Good point, Sir Duncan.

Why should I not be charged, say, £50 for that inglorious episode, a fraction of its real cost? Why not even a tenner or a fiver? As Sir Duncan has said, the NHS budget strains at its seams. There is no reason why we should pay for people to have tattoos removed from their bottoms. It seems rea- sonable that the middle classes should be required to stump up for non-essential ser- vices they can well afford. Mr Rodney Walker, former chairman of the NHS Trust federation, is also bang on the nail when he says that in the future the NHS should be for those who are genuinely sick, and for the elderly.

There is a moral point. If NHS services continue to be free in this way, they will continue to be abused, like any free ser- vice. If people have to pay for them, they will value them more. Above all, there is an economic point. In a very modest way, this extension of private funds into the NHS would help the Chancellor's strait- ened circumstances. The Government's borrowing figures for August show that this year's budget deficit is likely to be about £28 billion, about 4.6 billion more than forecast.

Yet somehow, as we all know, Mr Clarke faces an absolute political impera- tive to cut taxes in the November Budget. The only proper way to do that would be to cut spending. Mr Clarke is reported to be contemplating a public sector pay freeze. But public sector pay has already been frozen. Across Whitehall, orches- trated rows are breaking out about whose budget will be cut, with various unlikely characters taking turns to play tough cop and soft cop.

No sooner does John Major announce a Chequers meeting to launch a new Tory onslaught upon the welfare state, than sources close to Mr Lilley point out the dif- ficulties, namely that this will penalise the very erstwhile Tory voters whom the Gov- ernment must win back if it is to have any chance of winning the next election. William Waldegrave, the Chief Secretary, makes minatory noises about the way Gillian Shephard has been demanding more money for education. And then a leak appears from the Department of Educa- tion, warning that without more money state schools will have to close.

Mr Lilley's people admit that consider- ation has been given to a modest little plan to cut maternity benefit and transfer the responsibility to employers, with a potential saving to the Government of £450 million. The following day, the idea is reportedly squashed by the Prime Min- ister, not least because it fits rather oddly with Government ambitions for a new bonfire of burdens on business. And when Sir Duncan Nichol makes his case for encouraging more of us to spend their own money on health care, Stephen Dor- rell takes immediately to the airwaves to assure us that people's access to health care will not be decided by the size of their wallets.

We have an impression of fervid activity, of voices raised in debate, of symmetrical threat and response. The end result is like- ly, of course, to be neutral. The reality is that no big spending cuts can be expected from the Government in the lifetime of this parliament. It is just not something one does, not 18 months before an election. Tax cuts there will indeed be this November. But they will be found by raiding the £7 bil- lion contingency reserve, or fudging the payback of the PSBR, or some other such device.

Therefore they will be short-term tax cuts, matched by inconsequential cuts on spending. And the reason why there will be no serious spending cuts is that the Gov- ernment would not dare make a substantial change to middle-class entitlements under the welfare state.

To return to my dilemma with the ambulance: there is no practical reason why I should not be charged for allowing my family accidentally to use an emergen- cy vehicle as a taxi. There is a political reason: I will not be charged for the ambulance because politicians dare not take away from the middle classes the benefits they have accrued under the wel- fare state. For the same reason they will not take away all the other instruments of universal provision such as child benefit, disability allowance, and the rest. It is greed on our part, and cowardice on theirs. Now, to break the cycle, where do I send the cheque?