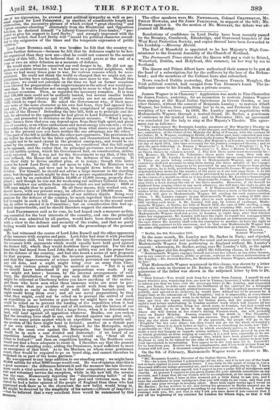 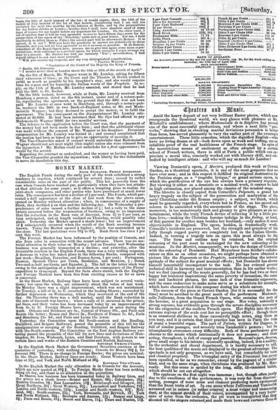 Joanna Wagner is in Chancery ! Application was made to

Vice-Chancellor Sir James Parker, yesterday, for an injunction to restrain Joanna Wagner from singing at the Royal Italian Operahouse in Covent Garden, or any other theatre, without the consent of Benjamin Lumley ; to restrain Albert Wagner, her 'father, from permitting her to do so, and Frederick Gye from accepting of her services. In 1850, Mr. Lumley opened negotiations with Mademoiselle Wagner, through a mutual friend, Dr. Becher, a gentleman of eminence in the musical world ; and in November 1851, an agreement was concluded for the lady to sing at Her Majesty's Theatre. The agree- ment ran as follows- " The undersigned Mr. Benjamin Lumley, possessor of Her Majesty's Theatre in London, and the Italian Opera at Paris, of the one part, and Mademoiselle Joanna Wag- ner, cantatrice, of the Court of his Majeity the King of Prussia, with the consent of her father, M. A. Wagner, residing at Berlin, of the other part, have concerted and con- eluded the following contract-1. Mademoiselle Joanna Wagner binds herself to sing three months at the theatre of Mr. Lumley, Her Majesty's, at London, to date from the 1st day of April 1852. (the time necessary for the journey comprised therein,) and to give the parts following—I, Romeo (' Montecchil; 2, Fides (' Prophete ') ; 3. Va- lentine ( Huguenots '); 4, Anna (' Don Juan') ; 5, Alice (' Robert he Diable '); 6, an Opera chosen by common accord. 2. The first three parts must necessarily he- ist. Romeo ; 2d, Fides ; 3d. Valentine ; these parts once sung, then only she will appear if Mr. Lumley desires it in the three other operas mentioned aforesaid. 3. These six parts belong exclusively to Mademoiselle Wagner, and any other caotatiice shall not presume to sing them during the three months of her engage- ment. If Mr. Lumley happens to be prevented by any cause whatever from giving these operas, he is held, nevertheless, to pay Mademoiselle J oanna Wagner the salary stipulated lower down for the number of the parts as it she had sung them. 4. In the case where Mademoiselle Wagner shall be prevented by reason of illness from singing in the course of a month as often as it has been stipulated, Mr. Lumleyis bound to pay the salary only for the parts sung. 5. Mademoiselle Joanna Wagner binds herself to sing twice a week during the run of the three months. However, if she herself be hindered from singing twice in any week whatever, she will have the right to give at a later period the omitted representation. 6. If Mademoiselle Wagner, fulfilling the wishes of the direction, consent to sing more than twice a week in the three months, this last will give to Mademoiselle Wagner 501. sterling for each representation extra. 7. Mr. Lumley engages to pay Mademoiselle Wagner a salary of 4001. ster- ling per month, and payment will take place in such manner that she will receive 1001. sterling each week. 8. Mr. Lumley will pay, by letters of exchange, Made- moiselle Wagner, at Berlin, the 15th of March 1852, the sum of 3001. sterling, a sum which will be deducted from her engagement by his retaining 1001. each month. 9. In all cases, except that when a verified illness would place upon her a hinderance, if Mademoiselle Wagner shall not arrive in London in eight days after that whence dates her engagement, Mr. Lumley will have the right to regard the nonappearance as a rupture of the contract, and will be able to demand an indemnification. 10. In the case where Mr. Lumley shall cede his enterprise to another, to have the right to transfer this contract to his successor, and in that case Mademoiselle Wagner has the same obligations and the same rights towards the last as towards Mr. Lumley.

In the same month, Mr. Lumley met Dr. Becher in Paris ; and objected, that the agreement did not include the usual and necessary clause restricting Mademoiselle Wagner from performing in .England without Mr. Lumley's consent : whereupon, Dr. Becher, acting, says Mr. Lumley's bill, as the agent of Mr. Wagner and his daughter, added the following clause, in French-

" Mademoiselle Wagner engages herself not touse her talents at any other theatre, nor in any concert or reunion, public or private, without the written authorization of Mr. Lumley.—Dr. JOSEPH BACHER. for Mademoiselle Joanna Wagner, and authorized by her." That Mademoiselle Wagner acquiesced in this clause, was shown by a letter which she wrote in German to Dr. Becher, on the 27th November. The ac- quiescence of the father was shown in the subjoined letter by him to Dr. Becher. " Dear Friend—You would wait long for a letter from Joanna. I myself do not know whether you, wandering Jew, are now in Vienna ; however, I write at all events to inform you that we have sent the necessary letter to Mr. Lumley, and requested him, pro forma, to defer once more the fulfilment of the contract for a fortnight longer, which has been already settled between us. He (Mr. Lumley) answered very piolitely, and agreed to it: however, he would have wished her to be present for a longer time at the rehearsals of ' The Prophete,' but it is impossible, as everywhere this time Joanna has much work to do before her journey ; and it is merely a short time ago that she began studying her Italian parts, and she requires a fort- night's rest before undertaking in London another work which will require all her energy. I should otherwise bring her check mate, to London, but that would not do. We shall try to be there at the appointed moment ; and from Hamburg, where she will remain at her sister's during Passion-week, she will probably leave on Easter Monday. Joanna remains for her debat in ' The Prophets, being sure of a quiet, extreme, and sure success. They prefer ' Romeo,' because they say she alone makes Romeo. If she succeeds, the people will go to the

• Prophete ' for her sake alone; but they would not go for the whole of Lucoley's

Prophete,' since it is much better at Gye's; there is something for both, hat' Tab' is preferable to ' Fid.' That, however, in which everybody agrees, is, that we have made a very bad bargain as regards money matters ; that clause pressed by you on us which prohibits us from singing at concerts, it is a real lose, especially as we are to have neither apartments nor carriage free, which have been granted to others. England is only to be valued for the sake of her money. I am curious to hear how your speculation is terminating. You appear to be the very man for it. Farewell let us bearfroin you. Receive our best compliments, and if you wish to hear from us Joanna will tell you. A thousand compliments from yours truly, A. WAGNER." On the 6th of February, Mademoiselle Wagner wrote as follows to Mr.

" Mr. Benjamin Lumley, Director of the Italian Opera, Paris. " Sir—As a true Christian I acknowledge all my sins, and it is not one of the least not to have replied to your amiable letter. I was daily on the point of doing it, but a thousand different things prevented me, and I became more guilty day by day. I have not the intention to excuse myself, but I expect in you a judge full of indulgence and charity. At present I express to you great thanks for your amiable intentions on my account, and I hope that all our wishes will be accomplished, at the same time yours as mine. Beside. that, I have at this moment got a little thing to ask you, and have the confidence in your indulgence that you will reply to me soon, and that you will not take your revenge in keeping silent. More than eight weeks ago I wrote to Mr. Bacher ; he has written to me, and during his presence in Berlin assured me in person that all would be arranged according to my desire ; nevertheless, I made the contract with you, Sir, and that is why I ask you once more if you consent that I put off the beginning of my contract for London for fifteen days, so that it will begin the 16th of April instead of the 1st; it would expire, then, the 15th of the month of July instead of the 1st of that month, considering that I am still too occupied the next two months by the labours at Berlin, and by the preparations for my Italian debOts at London, besides that I shall have absolute need of some days of repose for my health before my departure for London. On the other hand, I am of opinion that it will be very agreeable to you to have fifteen days more for the preparation of the opera of the • Prophets; quite new at your house. For me, I bold absolutely to delta there Fides; the second part will be afterwards Romeo. It is agreed, is it not ? Will you have the goodness to answer me definitively to these demands, and you will be very agreeable to do it as soon as possible. M.de Beason, intendant of the Royal Opera here, presses me to give him again some more repre- sentations, with reference to a revived opera, for which occasion I must arrange my time to a minute. Mr. Becher has told me certainly • Yes ; nevertheless, I find myself obliged to ask once more yourself.

" Will you receive my respects, and my very distinguished consideration.

" Cantatrice of the Court of his Majesty the King of Prussia.

" I should arrive then at London about the 15th or 16th of the month of April."

On the 9th of March, Mr. Wagner wrote to Mr. Lumley, asking for fifteen days extension of time; as the Court and the Theatre at Berlin wished to profit as much as possible by his daughter's stay, and she would require time for repose and for learning the Italian words of the Prophets. In re- ply, on the 11th of March, Mr. Lumley assented, and stated that he had paid the 3001. to Dr. Becher.

On the 10th instant, however, while at Paris, Mr. Lumley received from Hamburg a protest, dated on the 6th instant, under seal of a notary-pub- lic, repudiating the agreement, on the ground that the 3001. had not been peed. Mr. Lumley at once went to Humbert, and, through a notary-pub- lic, tendered the 3001. in two Bank-of-England notes, to Mr. and Made- moiselle Wagner; but they declined to accept the money, or to fulfil the agreement. The loss consequent on the disappointment Mr. Lumley esti- mated at 30,0001. He had been informed that Mr. Gye had offered to pay Mademoiselle Wagner 20001. for two months' services. The defence to the application before the Court was, that the payment of the money had not been made in due form ; and that the additional clause was made without the consent of Mr. Wagner or his daughter. Pecuniary compensation for Mr. Lumley was hinted at ; and counsel complained that the motion had been so timed as to give no o ortunity of meeting it. The Vice-Chancellor asked if counsel would undertake that Mademoiselle Wagner should not act next night (this night) unless she were released from the injunction ? Mr. Matins could not undertake for afirst appearance ; he would for the second. Regarding the contract as undoubted, and the money as having been paid, the Vice-Chancellor granted the injunction; with liberty for the defendants to move its dissolution this day.