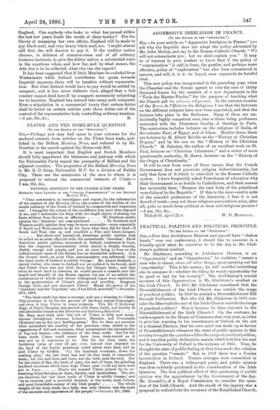 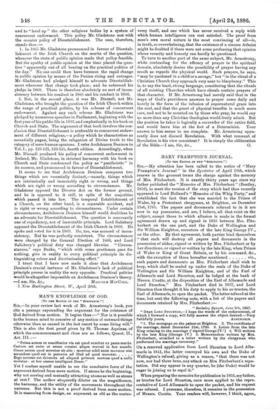 [To TRH EDITOR or THE "SPECTATOR."'

Snt,—Now that Archdeacon Denison and myself have " shaken hands" over our controversy, I should like to examine in a friendly spirit what he conceives to be the key to Mr. Glad- stone's political conduct.

Mr. Gladstone, according to Archdeacon Denison, is an

" Opportunist," and an " Opportunist," he explains, " means a man who is intent, above all other things, upon carrying out his 'opportunity.' This is his mania ; he will sacrifice everything else to compass it—whether the thing he wants opportunity for be good or bad for his country." The Archdeacon's crucial instance of this Opportunism is Mr. Gladstone's conduct on the Irish Church. In 1865 Mr. Gladstone considered that the Disestablishment of the Irish Church was outside the range of practical politics. In 1869 he carried a Disestablishment Bill through Parliament. But why did Mr. Gladstone in 1865 con- sider the Disestablishment of the Irish Church outside the range of practical politics ? Was it because he then objected to the Disestablishment of the Irish Church ? On the contrary, he made a speech in the House of Commons that very year, in order to give fair warning to his constituents at Oxford, on the eve of a General Election, that his own mind was made up in favour of Disestablishment whenever the state of public opinion in this country brought the question within the ran ge of practical politics; and it was that public declaration mainly which lost him his seat for the University of Oxford in the autumn of 1865. True, be thought the state of public feeling at that time made the solution of the question "remote." But in 1867 there was a Fenian insurrection in Ireland. Fenian outrages were committed in England. There was a widespread panic, and public opinion was thus suddenly quickened to the consideration of the Irish Question. The first political effect of this quickening of public opinion was the appointment by the Government of the day, Mr. Disraeli's, of a. Royal Commission to consider the ques- tion of the Irish Church. And the result of the inquiry was a proposal to redistribute the revenues of the Established Church,

and to "level up" the other religions bodies by a system of concurrent endowment. This policy Mr. Gladstone met with the counter policy of Disestablishment. The case, therefore, stands thus:- 1. In 1865 Mr. Gladstone pronounced in favour of Disestab- lishment of the Irish Church on the merits of the question, whenever the state of public opinion made that policy feasible. But the apathy of public opinion at the time placed the ques- tion " apparently out of all bearing on the practical politics of the day." No one could then have foreseen the rapid change in public opinion by means of the Fenian rising and outrages. Mr. Gladstone had pledged himself to advocate Disestablish- ment whenever that change took place ; and he redeemed his pledge in 1868. There is therefore absolutely no sort of incon- sistency between his conduct in 1865 and his conduct in 1868.

2. But, in the second place, it was Mr. Disraeli, not Mr. Gladstone, who brought the question of the Irish Church within the range of practical politics, by his scheme of concurrent endowment. Against any such scheme Mr. Gladstone was pledged by numerous speeches in Parliament, beginning with the first year of his public life in 1833, and emphatically in his book on Church and State. The argument of that book involves the con- clusion that Disestablishment is preferable to concurrent endow- ment of different religions,—a policy which he characterises as essentially pagan, being the relegation of Divine truth to the category of mere human opinions. I refer Archdeacon Denison to Vol. I., pp. 120-121,123-125, fourth edition. Accordingly, when Mr. Disraeli produced his policy of concurrent endowment in Ireland, Mr. Gladstone, in strictest harmony with his hook on Church and State condemned the policy as " pantheistic " in its essence, and pronounced in favour of Disestablishment.

It seems to me that Archdeacon Denison compares two things which are essentially distinct,—namely, things which are intrinsically and immutably right or wrong, and things which are right or wrong according to circumstances. Mr. Gladstone opposed the Divorce Act on the former ground, and he is opposed to it still, in spite of the majorities which passed it into law. The temporal Establishment of a Church, on the other hand, is a separable accident, and is right or wrong according to circumstances. Under certain circumstances, Archdeacon Denison himself would doubtless be an advocate for Disestablishment. The question is necessarily one of expediency, not of immutable principle. Lord Salisbury opposed the Disestablishment of the Irish Church in 1868. He spoke and voted for it in 1869. He, too, was accused of incon- sistency. But he was perfectly consistent. The circumstances were changed by the General Election of 1868, and Lord Salisbury's political duty was changed likewise. " Circum- stances," says Burke, "which with some gentlemen pass for nothing, give in reality to every political principle its dis- tinguishing colour and discriminating effect."