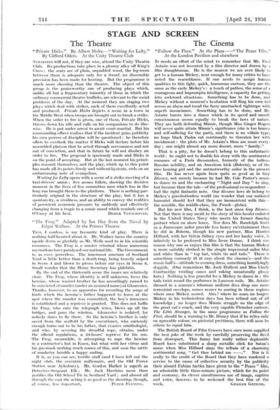 IT needs an effort of the mind to remember that Mr. Fred Astaire was not invented by a film director and drawn by a

film draughtsman. He is the nearest we are ever likely to

get to a human Mickey, near enough for many critics to have noted the resemblance. If one needs to assign human qualities to this light, quick, humorous cartoon, they are the

same as the early Mickey's : a touch of pathos, the sense of a courageous and impromptu intelligence, a capacity for getting

into awkward situations. • Something has to be done, and Mickey without a moment's hesitation will fling his own tail across an abyss and tread the furry unattached tightrope with superb insouciance. Something has to be done, and Mr. Astaire bursts into a dance which in its speed and unself- consciousness seems equally to break the laws of nature. They are both defending Minnie, though Miss Ginger Rogers will never quite attain Minnie's significance (she is too brazen and self-sufficing for the part), and there is no villain type, no huge black Pasha cat continually to threaten her with ravishment : the plots of Mr. Astaire's films are more every- day ; one might almost say more decent, more "family.".

That is a pity, for he doesn't belong to this unfantastic world : he ought not to double his story with the sentimental romance of a Paris dressmaker, formerly of the tedious Russian nobility, and an American hick (Roberta), or of the nice homing girl and the untrustworthy sailor in the present film. He has never again been quite so good as in Gay Divorce, not merely because he had Mr. Cole Porter's music to dance to and the enchanting "Night and Day" to sing, but because then the tale—of the professional co-respondent-- had the right fantastic note. Our divorce laws do belong to Mickey's gravitationless world (no wonder that our national humorist should feel that they are inconsistent with this— the sensible, the middle-class, the Punch—globe).

But his new film, I think, is the best since Gay Divorce. Not that there is any merit to the story of this hoofer enlisted in the United States Navy who meets his former dancing partner when on shore leave. Nor does Mr. Randolph Scott as a Juanesque sailor provide less heavy entertainment than he did in Roberta, though his new partner, Miss Harriet Hilliard, with her Sylvia Sidney eyes and her husky voice, is infinitely to be preferred to Miss Irene Dunne. I think one reason why one so enjoys this film is that the human Mickey is more suitably clothed in the simple impersonal sailor blue and white than in "top hat, white tie and tails." There is something curiously ill at case about the cinema's—and the music-hall's—attitude to evening dress, something horrifyingly doggish. (One remembers Mr. Jack Hulbert and Miss Cicely Courtneidge twirling canes and raking unnaturally glossy hats.) Nothing is less graceful for a Mickey to dance in : the tails twist round the performer in Laocoon coils. Mr. Astaire dressed in a seaman's inhuman uniform does drop one more terrestrial envelope, comes nearer to soaring in those regions where once Mickey soared. Alas where he soars no longer. Mickey in his technieolour days has been refined out of all knowledge ; no longer does Minnie struggle on , the edge of the great cat's couch, and the very capable Fleischer cartoon, The Little Stranger, in the same programme as Follow the Fleet, should be a warning to Mr. Disney that if he relics only on agreeable colour, on pictorial prettiness, there will soon be others to equal him.

The British Board of Film Censors have once more supplied the best joke of the week by carefully preserving the devil from disrespect. This funny but really rather deplorable Board have substituted a sharp metallic click for Satan's name when Miss Hilliard sings the refrain of a charming sentimental song, "Get thee behind me —." Nor is it really to the credit of the Board that they have rendered a service to the cause of collective security by the publicity their absurd Fabian tactics have given to the " Peace" film, an admirable little three-minute picture, which for its point and economy, its clever simultaneous use of image, caption and voice, deserve; to be reckoned the best film of the