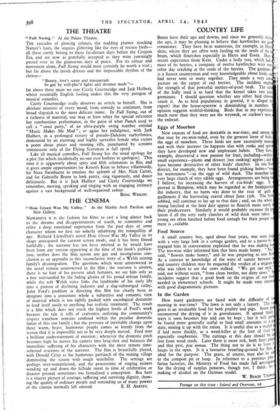 4. How Green Was My valley." At the Marble Arch Pavilion and New Gallery.

NOWADAYS it is the fashion for films to cast a long glance back to the dreams and disappointments of youth, to remember and relive a deep emotional experience from the past days of some character whom we first see soberly inhabiting the tranquillity of age. Richaid Llewellyn's novel How Green Was My Valley in its shape anticipated the current screen mode, and it has been filmed faithfully ; the narrator has not been omitted as he would have been from any version appearing at the time of the book's publica- tion, neither does the film sprout any gay and incongruous con- clusion as an appendix to this inconclusive story of a Welsh mining family's disintegration. The questions which went unanswered in the novel remain unanswered in the film ; the narrator is unseen, there is no hint of his present adult fortunes, we see him only as a boy surrounded by the fading glories of his proud artisan family, while the soft Welsh voice links the landmarks of his early life into a pattern of declining industry and a slag-submerged valley. John Ford's problem in directing this film has clearly been to integrate into a consistent whole a subjective and romantic view of material which is too tightly packed with sociological dynamite to lend itself easily to anything but realistic treatment. The result is a film which does not reach the highest levels of Ford's work because the tale it tells of craftsmen outliving the community's respect somehow remains confined within the peculiar domestic limits of this one family ; but the pressure of inevitable change upon these warm, brave, humorous people comes so keenly from the screen that it is impossible not to be very deeply moved. Ford uses a brilliant understatement of emotion ; whenever the dramatic pitch becomes high he moves his camera into long-shot and balances the immediate suffering of his characters with the more remote time- softened reactions of the narrator. The film is beautifully played, with Donald Crisp as the humorous patriarch of the mining village dominating the screen with tough sensibility. The settings are perhaps over-romanticised, and the processions of singing miners winding up and down the hillside street in time of celebration or disaster present sometimes too formalised a conception. But here is a sincere picture of courage, suffering and surviving dignity, show- ing the quality of ordinary people and reminding us_of many powers of the cinema normally left unused. E. H. ANSTEY.