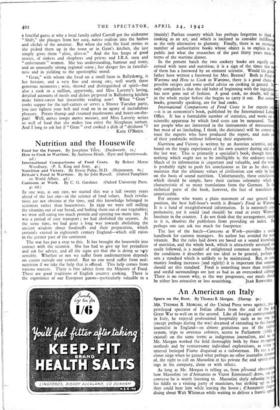 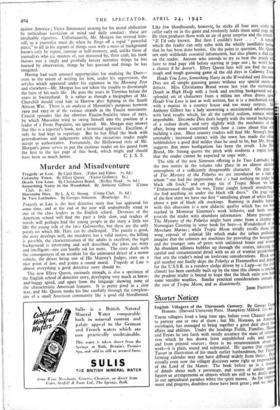 An American on Italy

MR. THOMAS B. MORGAN, of the United Press news agency, gas privileged spectator of Italian affairs from the end of the fi Great War to well on in the second. Like all foreign corresponden in Italy, he enjoyed professional hospitality such as no one (except perhaps during the war) dreamed of extending to the fore' journalist in England—an almost gratuitous use of the rails system, trips to overseas colonies, access to Parliament (wee existed) on the same terms as indigenous journalists, and so Mr. Morgan worked the field thoroughly both by these recugm methods and by venturesome individual explorations, as when entered besieged Fiume disguised as a railwayman. He ran a s closer siege when he gained what perhaps no other journalist dream of, the right to call on Mussolini at his private flat and spend eV' ings in his company, alone or with others.

As long as Mr. Morgan is telling us, from pErsonal observau how Mussolini (or d'Annunzio or Victor Emmanuel) dress, eat converse he is worth listening to. Mussolini shyly refusing to P his fiddle to a visiting party of musicians, but striking up so they could hear him while leaving the house ; d'Annunzio rha dising about Walt Whitman while waiting to deliver a frantic s against America ; Victor Emmanuel atoning for his moral abdication by meticulous asceticism of mind and daily conduct: these are invaluable vignettes. Unfortunately, Mr. Morgan has trained him- self, as a journalist must do when he flings off a rapid " powerful piece," to fill in his reports of things seen with a mass of background known only by report, rumour or half-memory, and, unlike those of journalists who art masters of, not mastered by, their craft, his book throws into a single and painfully breezy narrative things he has learned by observation, things he has guessed and things he has imagined.

Having had such unusual opportunities for studying the Duce— even to the extent of writing for him, under his supervision, the articles which appeared under his signature in the Morning Post and elsewhere—Mr. Morgan has not taken the trouble to disentangle the facts of his early life. He puts the years in Trentino before the years in Switzerland. It is rather as though a .biographer of Mr. Churchill should send him to Harrow after fighting in the South African War. There is no analysis of 'Mussolini's purposes between 1919 and 1922 or of the: various strands in the Fascist movement. Crucial episodes like the abortive Fascist-Socialist truce of 192x, by which Mussolini tried to swing himself into the position 9f a leader of a Front Populaire, are ignored. Mr. Morgan may answer that this is a reporter's book, not a historical appraisal. Excellent, if only he had kept to reportage. But he has filled the book with generalisations and judgements which the incautious reader might accept as authoritative. Fortunately, the Hollywood style of Mr. Morgan's prose serves to put the cautious reader on his guard from the first to the last page of this book, which might and should have been so much better. C. J. S. S.