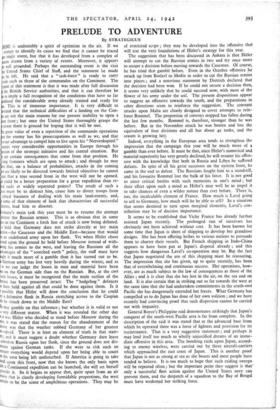 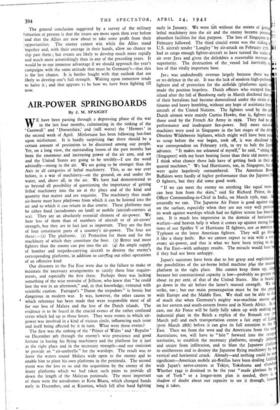 By STRATEGICUS HERE is undeniably a spirit of optimism in the air. If we attempt to identify its cause we find that it cannot be traced single event, but that it has developed from a complex of ces drawn from a variety of events. Moreover, it appears well grounded. Perhaps the outstanding event is the visit c United States Chief of Staff, and the statement he made he left. He said that a " task-force " is ready to carry raids such as those of the commandos on the Continent. The

point of this statement is that it was made after full discussion the British Service authorities, and that it can therefore be to imply a full recognition of the conditions that have so far ised the considerable army already trained and ready for This is of immense importance. It is very difficult to Nand that the technical difficulties of a landing on the Con- t are not the main reasons for our present inability to open a ern front ; but once the United States thoroughly grasps the reason there is ground for hoping that it will be met. e great value of even a repetition of the commando operations t the enemy has his preoccupations as well as we, and that to our advantage to compel him to live upon his " Nervenkapital." enjoys very considerable opportunities in Europe through his ssion of the strategic initiative and his central situation. But are certain consequences that come from that position. He long frontiers which are open to attack ; and though he may e that, on a balance of probabilities, attacks in the coming are likely to be directed towards limited objectives he cannot sure that a true second front in the west will not be opened. t could be a better preparation for a great expedition than re- trd raids at widely separated points? The result of such a ss must be to distract him, cause him to divert troops from critical business of dealing with his main !and-enemy, and, some of that element of luck that characterises all successful ations, lead him to disaster.

rmany's main task this year must be to resume the attempt destroy the Russian armies. This is so obvious that in some es on the Continent a fresh line of attack is now being debated. is held that Germany dare not strike directly at her main tire—the Caucasus and the Middle East---because that would e an undefeated army upon her flank. Yet when Hitler chose stand upon the ground he held before Moscow. instead of with- ng his armies to the west, and leaving the Russians all the vantages of the " scorched earth " policy, the staff must have ght it much more of a gamble than it has turned out to be. German army has lost very heavily during the winter, and as as we can judge the losses in men and material have been rse on the German side than on the Russian. But, at the cost such losses, it must be recognised that the main outline of the [mire has been preserved intact. The " hedgehog " defences Sc been held against all that could be done against them. Is it possible that Hitler will draw the conclusion that he could to a defensive flank in Russia stretching across to the Caspian tle he struck down to the Middle East?

fe may gamble on that inference ; but whether it is valid or not a very different matter. When it was revealed the other day tit was Hitler who decided to stand before Moscow during the kr; it was stated that the reason for the abandonment of the Isive was that the weather robbed Germany of her greatest :t—speed. There is at least an element of truth in that state- ot; and it must suggest a doubt whether Germany dare leave unbroken Russia upon her flank, since the ground does not dis- lunate against German tanks. If she were to risk such an nature everything would depend upon her being able to count In the west being left undisturbed. If America is going to take and upon this front, now that she knows the only basis upon a Continental expedition can be launched, she will set herself Provide it. So it begins to appear that, quite apart from an air owe that is clearly developing formidable proportions, the west enun to be the scene of amphibious operations. They may be

of restricted scope ; they may be developed into the offensive that will test the very foundations of Hitler's strategy for this year.

The suggestion that has been discussed in Ankara is that Hitler will attempt to cut the Russian armies in two and try once more to secure a decision before moving towards the Caucasus. Of course, he has tried that gambit before. Even in the October offensive he struck up from Roslavl to Medin in order to cut the Russian armies into pieces ; and a notorious statement by Dietrich declared that

the decision had been won. If he could not secure a decision then, it seems very unlikely that he could succeed now, with most of the

flower of his army under the soil. The present dispositions appear to suggest an offensive towards the south, and the preparations in other directions seem to reinforce the suggestion. The constant attacks upon Malta are clearly designed to cover attempts to rein- force Rommel. The proportion of convoys stopped has fallen during the last few months. Rommel is, therefore, stronger than he was before. But in the November attack he was beaten and lost the equivalent of four divisions and all but about 4o tanks, and the season is growing late.

Indeed, everything in the European area tends to strengthen the impression that the campaign this year will be much more of a gamble than ever before. It must be that, since Hitler's numerical and material superiority has very greatly declined, he will resume his offen- sive with the knowledge that both in Russia and Libya he suffered defeats. In spite of all his great successes on the eastern front, he came in the end to defeat. The Russians fought him to a standstill, and his favourite Rommel lost the bulk of his force. It is not good to enter critical battles with such memories in one's mind ; but their effect upon such a mind as Hitler's may well be to impel it to take chances of even a wilder nature than ever before. There is, too, the incalculable element of France. How much is Laval going to sell to Germany, how much will he be able to sell? In a situation that seems destined to turn upon marginal elements, Laval's con- tribution may be of decisive importance.

It seems to be established that Vichy France has already further assisted Japan recently. The prolonged run of successes has obviously not been achieved without cost. It has been known for some time that Japan is short of shipping to develop her grandiose designs. She has been offering bribes to various nations to persuade them to charter their vessels. But French shipping in Indo-China appears to have been put at Japan's disposal already ; and this suggests how dangerous Laval's co-operation may be. But the fact that Japan negotiated the use of this shipping must be reassuring. The impression that she has given, up to quite recently, has been that of overwhelming and continuous success. Her operations, how- ever, are as much subject to the law of consequences as those of the Allies ; and it is clear that she has lost in the air, on the sea and on land. It is also certain that in striking out so far towards the west at the same time that she had undertaken commitments in the south-east Pacific she has dangerously extended her forces. What Germany has compelled us to do Japan has done of her own volition ; and we have recently had convincing proof that such dispersion cannot be carried out with impunity.

General Royce's Philippine raid demonstrates strikingly that Japan's conquest of the south-west Pacific area is far from complete. In the description of the raid it was stated that at the advanced base from which he operated there was a force of fighters and provision for its maintenance. That is a very suggestive statement ; and perhaps it may lend itself too much to wholly unjustified dreams of art imme- diate offensive in this area. The bombing raids upon Japan, accord- ing to enemy wireless, were carried out by three aircraft-carriers which approached the east coast of Japan. This is another proof that Japan is not as strong at sea as she boasts and most people have tended to believe. It is too much to hope that such raiding sweeps will be repeated often.; but the important point they suggest is that only a successful fleet action against the United States navy can prevent them, and the despatch of a squadron to the Bay of Bengal must have weakened her striking force.

The general conclusion suggested by a survey of the military !situation at present is that the issues are more open then ever before and that the Allies are now about to take some profit from their opportunities. The enemy cannot win while the Allies stand together and, with their courage in their hands, allow no chance to slip past them ; but events are likely to develop much more rapidly and much more astonishingly than in any of the preceding years. It would be to our immense advantage if we should approach the year's campaigns with the same attitude that must be Germany's—that this is the last chance. It is battles fought with that outlook that are likely to develop one's full strength. Waiting upon tomorrow tends to halve it ; and that appears to be how we have been fighting till now.