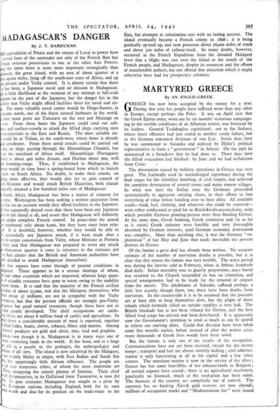 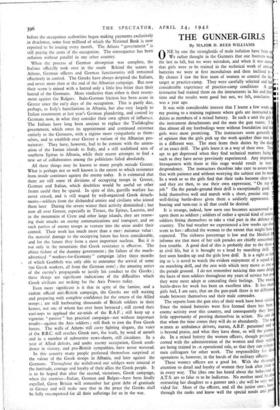 GREECE has now been occupied by the enemy for a year. During that year her people have suffered more than any other in Europe, except perhaps the Poles. It was on April 2ISC that the Greek Epirus army, worn out by six months' victorious campaign- ing in the terrible conditions of an Albanian winter, was betrayed by its leaders. General Tsolakoglou capitulated : not to the Italians, whose latest offensive had just ended in another costly failure, but to the German armoured divisions of von List. Seven days later he was summoned to Salonika and ordered by Hitler's political representative to form a " government " in Athens. On the 29th he announced in a broadcast that he had done so. Three days later the Allied evacuation had finished : by June 2nd we had withdrawn

from Crete. • The devastation caused by military operdtions in Greece was very great. The Luftwaffe used its unchallenged supremacy during the final stages for the relentless bombing of civil targets, and achieved the complete destruction of several towns and many remote villages. In what was later the Italian zone the Germans proceeded systematically to aggravate existing chaos, in their efforts to loot everything of value before handing over to their allies. All available stocks—food, fuel, clothing, and whatever else could be removed— were either confiscated or paid for in Reichskreditcassenscheine, with which portable German printing-presses were then flooding Greece. At the same time, Greek banking, Greek commerce and (in so far as it exists) Greek industry were forcibly and very thoroughly absorbed by German interests, until German economic domination was complete, More than anything else, it was the German " ex- ploitation " of last May and June that made inevitable the present distress in Greece.

Of the famine a great deal has already been written. No accurate estimate of the munber of starvation deaths is possible, but it is clear that this winter the famine was very terrible: The worst period was during the intense cold in February, when in Athens hundreds died daily. Infant mortality rose to ghastly proportions, mass burial was resorted to, the Church suspended its ban on cremation, and special arrangements had to be made for the removal of corpses from the streets. The inhabitants of Salonika suffered perhaps a little less acutely, though there, too, there have been deaths from starvation. In the countryside it is to be assumed that the peasants are at least able to keep themselves alive, but the plight of those islands which formerly relied on outside supplies is very bad. The British blockade has at last been relaxed for Greece, ani the first Allied food cargo has arrived and been distributed. It is apparently now the Government's intention to send as much as can be spared to relieve our starving allies. Could that decision have been taken some five months earlier, before instead of after the winter crisis many Thousands of Greek lives would have been saved.

But the famine is only one of the results of the occupation. Communications have not yet been restored, except for the enemy troops ; transport and fuel are almost entirely lacking ; civil adminis- tration is only functioning at all in the capital and a few other centres. The merchant marine is now in the service of the allies ; Greece has lost some four-fifths of her tobacco-lands to Bulgaria ; all normal exports have ceased ; there is no agricultural machinery, practically no livestock, much of the seed-grain has been eaten. The finances of the country are completely out of control. The currency has no backing (Greek gold reserves are now abroad), millions of occupation marks and " Mediterranean lire " were issued before the occupation authorities began making payments exclusively in drachmae, some four milliard of which the National Bank is now reported to be issuing every month. The Athens " government " is still paying the costs of the occupation. The consequence has been inflation without parallel in any other country.

When the process of German absorption was complete, the Italians officially took over in the south Behind the scenes in Athens, German officers and German functionaries still remained effectively in control. The Greeks have always despised the Italians, and never more than at the end of the Albanian campaign. But. now their scorn is mixed with a hatred only a little less bitter than their hatred of the Germans. More vindictive than either is their resent- ment against the Bulgars. halo-German friction has been acute in Greece since the early days of the occupation. This is partly due, perhaps, to Italy's humiliations in Albania, but also very largely to Italian resentment at last year's German plundering, and control by Germans now, in what they consider their own sphere of influence.

The Italians have long been anxious to replace the Tsolakoglou government, which owes its appointment and continued existence entirely to the Germans, with a regime more sympathetic to them- selves, and to establish over Greece a variant of the Albanian pro- tectorate. They have, however, had to be content with the annex- ation of the Ionian islands to Italy, and a still undefined area of southern Epirus to Albania, while their recent attempts to find a new set of collaborators among the politicians failed absolutely.

All these things may be known to many people outside Greece. What is perhaps not so well known is the extent to which resistance from inside continues against the enemy today. It is estimated that there are still some 18 divisions of occupying troops in Greece, German and Italian, which doubtless would be useful on other fronts could they be spared. In spite of this, guerilla warfare has never ceased, and is still waged by well-organised Greek detach- ments—soldiers from the disbanded armies and civilians who joined them later During the severe winter their activity diminished ; but now all over Greece, especially in Thrace, the Epirus, Laconia, and in the mountains of Crete and other large islands, they are renew- ing their attacks on enemy communications and transport, and on such parties of enemy troops as venture into the areas under their control. Their work has much more than a met nuisance value: the material damage to the occupying forces has been considerable, and for the future they form a most important nucleus. But it is not only in the mountains that Greek resistance is effective. The abject failure of the• dummy government ; the failure of the much- advertised " workers-for-Germany " campaign (after three months of which Goebbels was only able to announce the arrival of some 70o Greek workers, all from the German zone) ; the amazing antics of the enemy's propaganda to justify his conduct to the Greeks ; these things arc significant indications of the difficulties which Greek civilians are making for the Axis Powers today.

Even more significant is it that in spite of the famine, and a violent official anti-British campaign, the Greeks are still waiting and preparing with complete confidence for the return of the Allied troops ; are still harbouring thousands of British soldiers in their homes, not one of whom has ever been betrayed ; still crowd their roof-tops to applaud the air-raids of the R.A.F. ; still keep up a vigorous " passive " but practical campaign—not without important results—against the Axis soldiers ; still flock to jom the Free Greek forces. The walls. of Atheni still carry fighting slogans, the voice of the B.B.C. still reaches Greek ears, the truth, by word of mouth and in a number of subversive news-sheets, still circulates. In a year of Allied defeats, and under enemy occupation, Greek confi- dence in victory, and pro-British sympathies, have never wavered. In this country many people professed themselves surprised at the valour of the Greek troops in Albania, and later against the Germans. Throughout the withdrawal our soldiers were amazed at the fortitude, courage and loyalty of their allies the Greek people. It is to be hoped that after the second, victorious, Greek campaign, when the enemies—Italian, German and Bulgar—have been finally expelled, Great Britain will remember her great debt of gratitude to Greece and will make sure that in the peace the Greeks shall be fully recompensed for all their sufferings for us in the war.