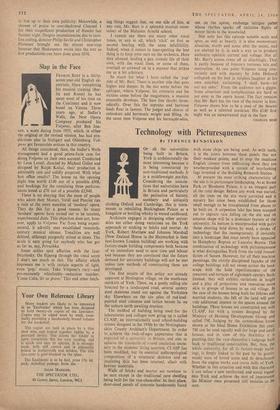 Architects engaged in designing other univer- sities are either doing variations on the York approach or sticking to bricks and mortar. At York, Robert Matthew and Johnson Marshall (New Zealand House in the Haymarket is their best-known London building) are working with factory-made building components both because of an immediate need to save time and labour and because they are convinced that the future demand for university buildings will not be met unless new methods of constructing them are developed.

The first results of this policy are already apparent at Heslington village, on the south-east outskirts of York. There, on a gently rolling site bisected by a landscaped road, several spidery steel skeletons stand out against the Yorkshire sky. Elsewhere on the site piles of red-lead- painted steel columns and lattice beams lie on the auburn earth awaiting erection.

The method of building being used for the laboratories and colleges now going up is called CLASP, an internationally used school-building system designed in the 1950s by the Nottingham- shire County Architect's Department. In order to achieve the rock-of-ages appearance that is expected of a university in Britain, and also to achieve the standards of sound insulation neces- sary in the students' living quarters, CLASP has been modified, but its essential anthropological composition of a structural skeleton and an insulating skin has been retained, albeit with heavier materials.

Walls of bricks and mortar are nowhere to be seen except in the traditional cave dwelling being built for the vice-chancellor. In their place, door-sized panels of concrete handsomely faced

with stone chips are being used. As with teeth, it is the joints between these panels that are their weakest points, and to stop the insidious English climate from infiltrating them they are weatherproofed with a system of interlocking lugs invented at the Building Research Station.

At present the most striking characteristic of the site is its picturesque landscaping. As at Stowe Park or Blenheim Palace, it is an integral part of the total design. Before any work was started, all the trees on the site were surveyed and a nursery has since been established for those small enough to be transplanted from places to be built on. A serpentine lake has been scooped out to capture rain falling on the site and its sinuous shape will be a dominant feature of the university. lts bottom is waterproofed with poly- thene sheeting held down by mud, a stroke of technology that fits incongruously, if invisibly, into a landscape that must surely have appealed to Humphrey Repton or Lancelot Brown. This combination of technology with picturesqueness is what distinguishes York from the total roman- ticism of Sussex. However, for all their machine parentage, the strictly disciplined facades of the college buildings will not sweep across the land- scape with the bold repetitiousness of the crescents and terraces of eighteenth-century Bath. Instead, they will exhibit variations in height and a play of projections and recessions more akin to groups of houses in an old village. In the case of the houses being built for fellows and married students, the fall of the land will pro- vide additional interest to the spaces around the buildings. These houses are constructed not with CLASP, but with a system designed by the Ministry of Housing Development Group and called 5M. Judging by the commodious house shown at the Ideal Home Exhibition this year, 5M can be used equally well for large and small houses, and in view of this flexibility it is puzzling that the vice-chancellor's lodgings hark back to traditional construction. But, then, the whole university, for all its factory-made build- ings, is firmly linked to the past by its gentle- manly aura of broad acres and its detachment from the engine works and cocoa mills of York. Whether in this situation and with this character it can infuse a new intellectual and social vigour into York and achieve the sort of importance the Minster once possessed still remains to be seen.