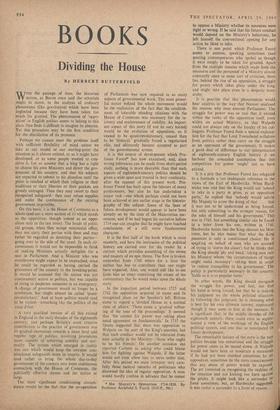 WITH the passage of time, the historian moves, as Bacon once said the scientists ought to move, to the analysis of ordinary phenomena (like gravitation) whioh have been neglected because they have been taken too much for granted. The phenomenon of 'oppo- sition' in English politics seems to belong to this class. One finds it difficult to imagine its absence. Yet this procedure may be the first condition for the elucidation of its presence.

Perhaps we cannot meet the problem itself with sufficient flexibility of mind unless we take as our model or our starting-point the situation as it almost existed, or as it might have developed, or as some people wanted to con- ceive it. Let us assume that a king has a right to choose his own Ministers and direct the gov- ernment of his country; and that his subjects are expected to submit to his direction until the point is reached at which their religion or their traditions or their liberties or their pockets are grossly outraged. Then they may resort to their recognised safeguard: they may refuse supplies and make the continuance of the existing government impossible.

On this basis, it is the House of Commons as a whole (and not a mere section of it) which stands as the opposition, though indeed as an oppo- sition only in the last resort. The heads of politi- cal groups, when they accept ministerial office, may not carry their parties with them and may rather be regarded as deserting their parties— going over to the side of the court. In such cir- cumstances it would not be impossible to think of making Ministers actually ineligible for a seat in Parliament. And a Minister who was overthrown might expect to be impeached, since he could be regarded as having carried the grievances of the country to the breaking-point. It would be assumed that the nation was not continuously active in politics, but was capable of rising to desperate measures in an emergency. A change of government would no longer be a revolution, but might almost be called 'quasi- revolutionary.' And at least politics would tend to be violent--something like the politics of the coup d'etat.

A very qualified version of all this existed in England in the early decades of the eighteenth century; and perhaps Britain's most creative contribution to the practice of government was its gradual movement towards a more level and regular type of politics, involving procedures more capable of achieving stability and nor- mality. The system which emerged in reality was one which would keep the extreme con- stitutional safeguards more in reserve. It would tend rather to bring the whole day-to-day government of the country into more continuous connection with the House of Commons, the politically effective classes and the nation at large.

The most significant conditioning circum- stance would be the fact that the co-operation of Parliament was now required in so many aspects of governmental work. The most power- ful motor behind the whole movement would be the realisation of the fact that the establish- ment of tolerable standing relations with the House of Commons was necessary for the re- covery and maintenance of stability. An import- ant aspect of this story (if not its very kernel) would be the evolution of opposition, as it ceased to be quasi-revolutionary, ceased then to be 'disloyal,' gradually found a regularised role, and ultimately became accepted as part of the governmental system.

It is this course of development which Pro- fessor Foord* has now examined; and, since wrong inferences can be made from short-period study, nothing is more desirable than that such aspects of eighteenth-century politics should be given a wide span and treated in their continuity, after the manner of this present work. Pro- fessor Foord has built upon the labours of many predecessors, but also he has undertaken a major task----one which perhaps could not have been achieved at any earlier stage in the historio- graphy of this subject. Some of the lines of future development would appear to have been already set by the time of the Hanoverian suc- cession, and if he had begun his narrative before 1714 one can imagine that he might have reached conclusions of a still more fundamental character.

It is the first half of the book which is most masterly, and here the intricacies of the political history are carried over for the reader by a current which provides something of the sweep and majesty of an epic theme. The flow is broken somewhat from 1760 where for a time the author has less to contribute than one might have expected. Also, one would still like to see from him an essay containing the cream of the commentary that he would make upon the whole story..

In the important period between 1725 and 1742 the opposition acquired its name and its recognised place on the Speaker's left. Britons came to regard a 'divided House as a normal state of affairs.' There came a 'gradual soften- ing of the tone of the proceedings.' It seemed that 'the contest for power was taking place amid agreement on fundamentals.' In 1737 the Queen suggested that there was opposition to Walpole on the part of the King's enemies, but that such conduct would not be tolerated from men actually in the Ministry—'those who ought to be his friends.' On another occasion she reported Carteret as asking who could blame him for fighting against Walpole, if the latter would not even allow him to serve under him. After this period we must interpret very care- fully those tactical remarks of politicians who disowned the idea of regular opposition. A man would hardly confess in advance that he meant

to oppose a Ministry whether its measures were right or wrong. If he said that his future conduct would depend on the Ministry's behaviour, he left himself the conventional opening for any action he liked to take.

There is one point which Professor Foord seems to assume, speaking sometimes (and quoting contemporaries who spoke) as though it were simply to be taken for granted. Apart from the multiple reasons which made both the measures and the personnel of a Ministry almost constantly open to some sort of criticism, there lies, behind the rise of an opposition, a struggle for power which takes place under the king, and might take place even in a despotic mon- archy.

It is possible that this phenomenon would bear analysis in the way that Namier analysed the reasons why men entered Parliament. The struggle for power was so real that it existed within the ranks of the opposition itself, even within an actual Ministry, so that Walpole could not always rely on the loyalty of his col- leagues. Professor Foord finds a special explana- tion for the fact that Lord Townshend withdrew from politics rather than carry on the struggle as an opponent of the government. It makes a good deal of difference to our interpretation of eighteenth-century English history if we harbour the concealed assumption that this competition for power 'ought' not to have existed.

It is a pity that Professor Foord has relegated to a footnote a too inadequate reference to the views of the Earl of Hardwicke. When Hard-

wicke was told that the King would not 'submit to take in a party in gross, as an opposition

party,' he replied that 'nobody would advise His Majesty to avow the doing of that . . . that it was not to be understood as being forced; but only submitting to the stranger reason, for the sake of himself and his government.' This was in 1763, but something similar can be found in a letter from his son, written in 1746.

Hardwicke insists that the King chooses his Min- isters, but he also insists that what the King possesses is only a conditioned choice. He is speaking on behalf of men who are accused of trying to 'storm the closer; but he thinks that the King should 'ply and bend,' taking men into his Ministry whom 'the circumstances of things might make necessary'—taking them in order `to restore tranquillity to his government.' The policy is particularly necessary in this country, 'liable as it is to popular turns.'

In other words, the King should recognise the struggle for power, and feel, not that his hand is being forced, but that he is making his judgment on the whole political situation. In following this judgment, he is choosing what is best for his own ultimate interest, unpleasant though it may seem to him at the moment. It is significant that, in the middle decades of the

eighteenth century, there could exist so sophis- ticated a view of the workings of the English political system, and one that so anticipated its future development.

The remarkable feature of the story is the way politics became less sensational and the struggle for power came to be tamed down. A Walpole would not have been so moderate a statesman if he had not been checked sometimes by an opposition, sometimes by the mere consciousness that any abuse of power would be exposed- The art consisted in recognising the realities of the situation and not kicking too hard against the pricks. It might look like a surrender to force sometimes, but, as Hardwicke suggested, it was rather a surrender to a form of reason.