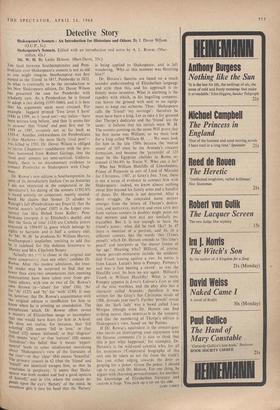 THE feud between Southamptonites and Pem- brokians over Shakespeare's sonnets is not as old as one might imagine. Southampton was first named as the 'friend' in 1817, Pembroke in 1832. In what is eventually to be the introduction to his New Shakespeare edition, Dr. Dover Wilson has presented the case for Pembroke with scholarly care. As a Pembrokian he is forced to adopt a late dating (1597-1606), and it is here that his arguments seem most strained. For example: laggard printed Two loves I have' (144) in 1599, so it 'need not'—my italics—'have been written long before,' and thus 'it seems fair to assume' that 'friend' and poet first met 'in 1599 or, 1597, certainly not as far back as 1593-4.' Another awkwardness for Pembrokians is that Marlowe--the most likely 'rival poet'— was killed in 1593. Dr. Dover Wilson is obliged to revive Chapman's candidature with the pro- viso, borrowed from Robert Gittings, that the 'rival poet' sonnets are semi-satirical. Unfortu- nately, there is no documentary evidence to connect Pembroke or Shakespeare with Chap- man.

Dr. Rowse's new edition is Southamptonite. In spite of its introductory fanfare ('as an historian I am not interested in the conjectural or the speculative'), his dating of the sonnets (1592-95) is based entirely on conjecture, mainly second- hand. He claims that Sonnet 25 alludes to Raleigh's fall (Pembrokians say Essex's); that the mortal moon's 'eclipse' (107) is the Lopez con- spiracy (an idea filched from Keller: Pem- brokians interpret it as Elizabeth's death); and that the 'fools of time' (124) are Catholic priests executed in 1594-95 (a guess which belongs by rights to Sarrazin and is half a century old). As 'Mr. W. H.' he produces Sir William Harvey, Southampton's stepfather, omitting to add that he is indebted for this dubious brainwave to Massey and Mrs. Charlotte Stopes.

'Actually my t...0 is closer to the original and more conservative than any other,' confides Dr. Rowse. After this modest admission, the trust- ful reader may be surprised to find that no fewer than sixty-two emendations (not counting Punctuation) have been taken over from pre- vious editors, with one or two of Dr. Rowse's own thrown in—`alters' for 'alter' (36), 'As' for 'At' (127) and `by' for 'with° (130). It may be, however, that Dr. Rowse's acquaintance with the original edition is insufficient for him to know when he is printing an emendation. The Paraphrases which Dr. Rowse offers reveal a mastery of Elizabethan usage so incomplete that one would have fears for him in A-level. He does not realise, for instance, that 'fell a-doting' (20) means 'fell in love,' or that foiled' (25) means 'defeated,' or that 'disgrace' (34) means 'scar,' or that 'curious' (38) means `fastidious'—his belief that it means 'experi- mental' leads to some misdirected moralising about 'Shakespeare's view of the literature of ,th,e time'—or that 'clear' (84) means 'beautiful.' ,J Ile primary conceit in 62 (that the 'friend' and myself' are identical) escapes him, so that he Concludes in perplexity, 'it seems that Shake- sPeare was both modest and had a good opinion of himself,' and in 114, where the conceit de- Pends upon the eye's 'flattery' of the mind, he somehow gets it into his head that the 'flattery'

is being applied to Shakespeare, and is left wondering, 'Who at this moment was flattering him?'

Dr. Hotson's theories are based on a much sounder understanding of Elizabethan language and style than this, and his approach is in- finitely more inventive. What is alarming is the rapidity with which, in his beguiling company, one leaves the ground with next to no equip- ment to keep one airborne. Thus; Shakespeare calls the `friend'- 'my sovreign': therefore he must have been a king. Let us take it for granted that Thorpe's dedicatee and the 'friend' are the same: it follows that his initials were W. H. The sonnets punning on the name Will prove that his first name was William; so we must look for a king called William H. . . . We must look for him in the late 1580s because the 'mortal moon' of 107 must be the Armada's crescent formation, and because the 'pyramids' of 123 must be the Egyptian obelisks in Rome re- erected (1586-89) by Sixtus V. Who can it be?

Who but William Hatcliffe of Lincolnshire, Prince of Purpoole (a sort of Lord of Misrule) for Christmas, 1587, at Gray's Inn. True, there is not a scrap of evidence to connect him with Shakespeare: indeed, we know almost nothing about him beyond his family arms and a handful of dates. Dr. Hotson is not deterred. After a short struggle, the concealed name HATLIV emerges from the letters of Thorpe's dedica- tion, and HATLEAVE, HATLIVE and even LIVE HAT from various sonnets (a doubter might point out that HOTSON and SUN HAT are similarly ex- tractable). But it is not enough to have the friend's name: what did he look like? In 47 there is mention of a portrait, and 16, in a different context, has the words 'this (Times pensel),' which Dr. Hotson emends to 'this time's pencil' and interprets as 'the master limner of the age.' Meaning who? Hilliard, of course, whose portrait-miniatures include the unidenti- fied Youth leaning against a tree. Its motto is from Lucan. Lucan's hero is Pompey. Pompey's seal was a lion bearing a sword: so was the Hatcliffe crest. So here we are again: Hilliard's Youth is William Hatcliffe! What is more, Pompey appears in Love's Labour's Lost as one of the nine worthies, and the play also has a character called Armado: therefore it was written for the Gray's Inn Christmas revels of 1588, Armada year (see?). Further 'proofs' reveal that the 'dark lady' was a bawd called Luce Morgan (though even Dr. Hotson can find nothing nearer than MORTGAG'D in the sonnets), and that the numbering of Thorpe's edition is Shakespeare's own, based on the Psalms.

If Dr. Rowse's equivalent is the concert-goer who insists on interrupting your enjoyment with his fatuous comments ('it is nice to think that this is just what happened,' for example), Dr. Hotson's is the wild-eyed scientist who, for all his assurances (`Conjectural biography of this sort can be taken as not far from the truth'), has you either edging towards the door or groping for a poker. Given the poker, I should opt to stay with Dr. Hotson. For one thing, he argues with charming persuasiveness; for another, his knowledge of Elizabethan literature and custom is huge. You pick up a lot on the side.