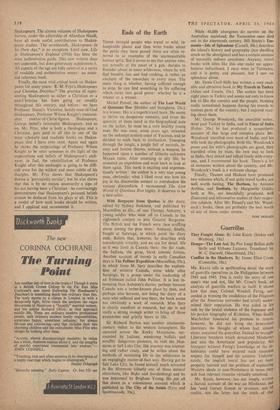 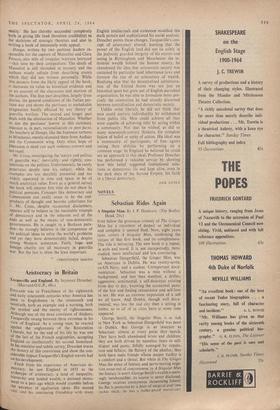 Conflict in the Shadows. By James Eliot Cross. (Constable, I8s.) Ma. KEATS tells in spellbinding detail the story of guerrilla operations in the Philippines between 1943 and 1945. This is really the story of one man's war and not, like Mr. Cross's book, an analysis of guerrilla warfare in itself. It shows how that man, Colonel Wendell Fertig, suc- ceeded in winning the confidence of the Filipinos- after the American surrender had totally under- mined their reputation. He was aided in his task by the brutal violence of the Japanese and his pocket biography. of Richelieu. When finally MacArthur honoured his promise to return, however, he did not bring the benevolent liberators the thought of whom had, almost alone, sustained the guerrillas. Instead he brought Liberator bombers which devastated Mindanao and also the Americans' new popularity. NO foreigner without Fertig's knowledge of the in' habitants could have secured such immense respect for himself and his country. Unfortu- nately, the implicit moral has not yet been properly learned and the problem of explaining Western ideals to non-Westerners in terms they will find relevant remains virtually unsolved. Mr. Keats, however, has not simply written a factual account of the war on Mindanao, but has `used literary license to re-create, out of al reality, not the letter but the truth of that

reality.' He has thereby succeeded completely both in giving life (and therefore credibility) to the skeletons of strategic theorists and also in writing a book of immensely wide appeal.

Dongo, written by two partisan leaders re- sponsible for the capture of Mussolini and Clara Petacci, also tells of irregular warriors betrayed —this time by their compatriots. The death of Mussolini is still shrouded in mystery and the authors wisely refrain from describing events which they did not witness personally. While this detracts from the likely appeal of the book, it increases its value as historical evidence and as an account of the characters and motives of the authors. The first part describes, largely from diaries, the general conditions of the Italian par- tisan war and shows the partisans as unshakable pragmatists hardly affected by any theory of guerrilla warfare. The second and longer part deals with the elimination of Mussolini. Whether or not the partisans' horror at this summary injustice is, in part, rationalisation ex post facto, the butchery at Dongo, like the Japanese tortures in Mindanao, merely alienated them from Audisio and the Communist wing. Only when hope of liberation is dead can such violence convert and not repel.

Mr. Cross, investigating the 'nature and politics of guerrilla war,' inevitably,' and rightly, con- centrates on the politics. Unfortunately, he rarely Penetrates deeply into his subject, while his examples are too sketchily presented and too widely separated in time and space to be of much analytical value. Even 4 a general survey the book will interest few who do not share its political premises. Concepts like democracy and Communism can easily cease to be the end- products of thought and become substitutes for it. Mr. Cross, despite occasional disclaimers, appears still to believe in the inevitable triumph of democracy and in the inherent evil of the ends as well as the means of non-democratic governments. He is caught in a Burkean para- dox—he strongly believes in the competence of his political ideas to solve the world's problems and yet they have demonstrably failed, despite strong Western assistance. Faith, hope and foreign charity are all necessary in guerrilla war. But the last is often the least important.