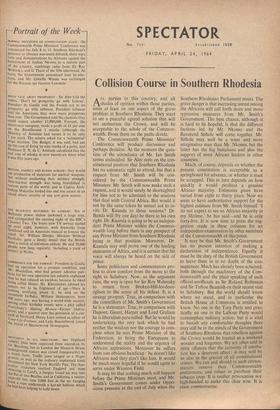 ALL parties in this country, and all shades of opinibn within those parties, unite at least on one aspect of the grave problem in Southern Rhodesia. They want to see a peaceful agreed solution that will not embarrass the Crown, and will be acceptable to the whole of the Common- wealth. From there on the paths divide.

The Commonwealth Prime Ministers' Conference will produce discussion and perhaps decision. At the moment the ques- tion of the attendance of Mr. Ian Smith seems undecided. Sir Alec rests on the con- stitutional position that Southern Rhodesia has no automatic right to attend, but that a request from Mr. Smith will be con- sidered by the Commonwealth Prime Ministers. Mr. Smith will now make such a request, and it would surely be shortsighted for him not to be admitted to the sessions that deal with Central Africa. But would it not by the same token be unreal not to in- vite Dr. Kaunda to those sessions? Dr. Banda will (by one day) be there in his own right. Dr. Kaunda is going to be an indepen- dent Prime Minister within the Common- wealth long before there is any prospect of any Prime Minister from Southern Rhodesia being in that position. Moreover, Dr. Kaunda may well prove one of the leading statesmen of Africa, and it is certain that his voice will always be heard on the side of peace.

Some politicians and commentators pro- fess to draw comfort from the move to the right in Salisbury. Now, so, the argument runs, the way is open for Sir Roy Welensky to return from Broken-Hill-les-deux- eglises to the scene of his defeat. It is a strange prospect. True, in comparison with the councillors of Mr. Smith's Government he is a statesman. True, in comparison with Dupont, Gaunt, Harper and Lord Graham he is liberalism personified. But he would be undertaking the very task which he had neither the wisdom nor the courage to com- plete when he was Prime Minister of the Federation, to bring the Europeans to understand the reality and the urgency of African aspirations. Moreover he suffers from one obvious handicap : he doesn't like Africans and they don't like him. It would be much more hopeful if he would agree to serve under Winston Field. It may be that nothing much will happen before the Prime Ministers meet, and Mr. Smith's Government comes under Oppo- sition pressure at the end of July when the Southern Rhodesian Parliament meets. The grave danger is that increasing unrest among the. Africans will call forth more and more- repressive measures from Mr. Smith's Government. The best chance, although it is hard to be hopeful, is that the different factions led by Mr. Nkomo and the Reverend Sithole will come together. Mr. Sithole may well be a wiser and more imaginative man than Mr. Nkomo, but the latter has the big battalions and also the support of most African leaders in other countries.

Much, of course, depends on whether the present constitution is acceptable as a springboard for advance, or whether it must be scrapped. This in turn depends on how quickly it would produce a genuine African majority. Estimates given have varied from eight to thirty years. Now we seem to have authoritative support for the highest estimate from Mr. Smith himself. 'I do not expect to see an African majority in my lifetime,' he has said—and he is only forty-five. It is now time to press the sug- gestion made in these columns for an independent examination by other members of the Commonwealth of this point.

It may be that Mr. Smith's Government has no present intention of making a declaration of independence. Equally it must be the duty of the British Government to leave them in in no doubt of the con- sequences. Much has already been achieved, both through the machinery of the Com- monwealth and the plain speaking of such official-unofficials as Sir Roland Robinson and Sir Tufton Beamish on their recent visit to Salisbury. But the world should know where we stand, and in particular the British House of Commons is entitled to know. No one in the Tory Party and prac- tically no one in the Labour Party would contemplate military action, but it is vital to banish any comfortable thoughts there may still be in the minds of the Government of Southern Rhodesia that rebellion against the Crown would be treated as a weekend wonder and forgotten. We are often told in petty offences that the certainty of retribu- tion has a deterrent effect: it may well be so also in the gravest of all constitutional crimes. We can and should in such circum- stances remove their Commonwealth preferences, and refuse to purchase their tobacco crop. It is neither provocative nor high-handed to make this clear now. It is plain commonsense.