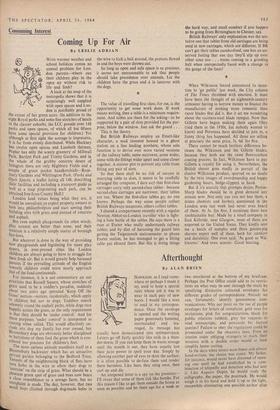 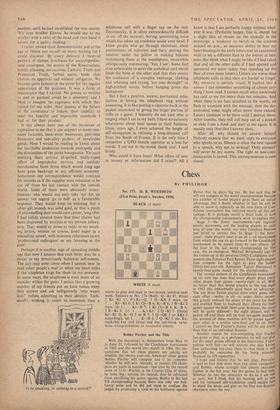 An unopened letter is a spy on the premises— I'll swear that some of them tick like bombs. For this reason I like to get them outside the house as soon as possible and let them age for a week or

two smothered at the bottom of my briefcase. Perhaps the Post Office could add to its restric- tions on what may be sent through the mails by specifying distinctive coloured envelopes for different grades of correspondence. Already we can, fortunately. identify government com- munications. Why not insist on the use of purple envelopes for letters of complaint, gold ones for invitations, pink for congratulations, black for public relations rubbish, grey for requests to read manuscripts, and postcards for factual queries? Failure to obey the'regulations could be prosecuted under the obscenity laws. Even an interim order obliging strangers to mark their missives with a double stripe would at least simplify home sorting. In the days when letters were fewer and always hand-written, the choice was easier. My father, for instance, would never have dreamed of open- ing one until he had established by a com- bination of telepathy and detection who had sent it. Like Auguste Dupin, he would study the calligraphy, the paper, the postmark. He would weigh it in his hand and hold it up to the light, meanwhile eliminating one possible author after

another, until he had established the true source. It's your brother Edwin,' he would say to my mother with a twist of the .head and then hand it across for a public reading.

I rather envied these demonstrations and at the age of fifteen put myself on every mailing list I could discover. By every delivery I received packets of stamps, brochures for encyclopiedias, seed catalogues, the secrets of the Rosicrucians, family planning /instructions, Catholic Truth and Protestant Truth, herbal cures, book club choices on approval- and without obligation. We became quite famous in the street for the regular appearance of the postman. It was a form of reassurance that I existed. No person so written to and so pursued could be a nonentity and I liked to imagine the eagerness with which they waited for my order, their dismay at the failure of the remittance to follow, their inability to meet the fanciful and impossible standards 1 had set for their product.

It has always been one of the mysteries of capitalism to me that it can support so many one- room factories, back-street businesses, part-time financiers and side-alley pushers of unsaleable goods. Here I would be reading in Lenin about the inevitable tendencies towards monopoly and the elimination of the petite bourgeoisie. Yet each morning there arrived ill-spelled, badly-typed offers of improbable services and unlikely merchandise from firms which would long ago have gone bankrupt in any efficient economy. Sometimes our correspondence would continue for months as if the supplier were reluctant to be cut off from his last contact with the outside world. Some of them were obviously mono- maniacs who would not only take `no' for an answer but regard `go to hell' as a favourable response. They would keep on insisting That a silver-gilt brooch was solid gold, or that a pinch of evil-smelling dust would cure cancer, long after

I had loftily assured them that their claims had been disproved by analysis in my private labora- tory. They would sit down to reply to my insult- ing letters, written on coarse, lined paper in a schoolboy scrawl, with insincere references to my `professional colleagues' or my 'evening at the club'.

Perhaps it is another sign of spreading middle age that now I assume that each letter may be a threat to my precariously balanced self-esteem. The day may even come when I cannot bear to read other people's mail or when my heart sinks if the telephone rings for them in my presence. In some ways, the telephone is even more of an outsider within the gates. I notice that a growing number of my friends put on false voices when they answer and ask belligerently 'who wants him?' before admitting to their identity. Tech- nically, nothing is easier to terminate than a 'Is he speaking, or miming io a record?'

telephone call with a finger tap on the rest. Emotionally, it is often extraordinarily difficult to cut off the insistent, boring, questioning voice which has taken up residence inside your head. I know people who go through elaborate, silent pantomimes of rejection and fury, putting the receiver under the pillow or making hideous threatening faces at the mouthpiece, meanwhile obsequiously murmuring, 'Yes, I see'. Some find it so unbearable to sever the umbilical cord which feeds the bore at the other end that they mimic the confusion of a complex exchange, clicking and whirring and crying 'are you through?' in high-pitched voices, before banging down the instrument.

But I find a positive, ascetic, puritanical satis- faction in letting the telephone ring without answering. It is like putting a cigarette back in the packet unsmoked or giving the larger portion of trifle to a guest. I honestly do not care who is ringing when I am in my bath. I have no curiosity whatsoever about their names or their business. Once, years ago, I even achieved the height of self-abnegation in refusing a long-distance call from the South of France. It is the only time I remember a GPO female operator at a loss for words. 'I am not in the mood, thank you', I said firmly.

Who could it have been? What offers of love or money or information did I reject? , All

know is that I am perfectly happy without what- ever it was. (Perfectly happy, that is, except for a slight film of rheum on the eyeballs in the mornings, a tendency to twitch in the tendons around six p.m., an uncanny ability to hear my heart beating in the early hours and an occasional wish to see a different face in the mirror at bed- time. But think what I might be like if I had taken that and all the other calls, if I had opened and answered my letter today thus speeding up the flow of even more letters.) Letters are worse than telephone calls in that they are harde to forget. My memory is entirely visual. If backed into a corner I can remember something of almost any- thing I have read. I cannot recall what somebody has said to me for more than ten minutes. And when there is no face attached to the words, no flesh to associate with the message, then the dis- embodied voice might often never have existed. Letters continue to be there until I destroy them. After months, they will still leap out of a pocket or slide from a book and start at me again. It is usually only then that I answer them.

After all, why should we answer letters? Nobody expects that we must reply to everyone who speaks to us. Silence is often the best riposte to a speech, why not to writing? 'Only connect' will never be my motto. The right to non-com- munication is sacred. This correspondence is now closed.