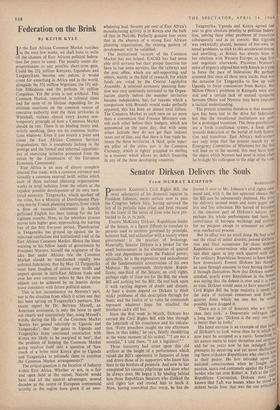 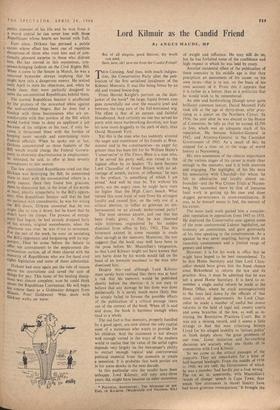 PRESIDENT KENNEDY'S Civil Rights Bill, the most substantial of his domestic legacies to President Johnson, seems certain now to pass the Congress before July, having survived the last of its periodic false crises and been rescued by the latest of the series of lions who have pre- tended to lie in its path.

Everett McKinley Dirksen, Republican leader of the Senate, is a figure difficult to translate to persons used to societies governed by principle, however bad, and unfamiliar with a society where government is the practice of brokerage. Materially, Senator Dirksen is a broker for the small businessman in his alternation of quarrel with and dependence upon the Federal power; spiritually, he is the expression and embodiment of the fundamentalist conservatism of his own Midwest. He commands thirty-three Repub- licans, one-third of the Senate; on civil rights, perhaps eight of these are for the Bill, the whole Bill and nothing but the fill; the rest look upon it with varying degrees of doubt and distaste. At least a dozen depend on Dirksen to think sticky problems of this .description through for them; and the twelve or so votes he commands represent whatever hope for mischief the Southern cadre still has.

Since the first week in March, Dirksen has carried the Civil Rights Bill with him through the labyrinth of his conscience and his calcula- tion. 'Forty preachers caught me one afternoon there in that lobby,' he says, faintly shuddering at the worst moment of his ordeal. "I am not a moralist," I told them, "I am a legislator."'

Those innocents had come upon this old artificer at the height of a performance which raised the Bill's opponents to fantasies of hope and drove those of its supporters who know him least to the borders of paranoia. And now he has completed his sinuous pilgrimage and done what he always does. He began it by binding behind him those Republican Senators who disliked the civil rights law and trusted him to leech it. Now, having assembled that troop, he has de- livered it over to Mr. Johnson's civil rights com- mand and, with it, the last apparent chance that the Bill can be substantially depleted. His price for delivery seemed more and more paper and less and less substance. His hatred of boredom is the sincerest part of Dirksen's nature; and perhaps his whole performance had been the contrivance of baroque writhings and coilings for no purpose except to ornament an other- wise mechanical process. But its effect was no small thing. He had acted out the ritual of initial distrust, pained delibera' tion and final acceptance for those dubious Republican conservatives who always appoint him their agent in any such quarrel with self. For ordinary Republican Senators to have heard how strenuously Everett Dirksen has thought an issue through amounts to their having though; it through themselves. Now that Dirksen scenic° satisfied, nearly every Republican in the Senate was saying that the debate is over and it is time to vote. Dirksen would seem to have assured the Civil Rights Bill the large majority it needs f°1* the aura of national consensus and from 3 quarter from which no one but he could possibly have dragged it. `There are a lot of Senators who are worse than they look,' a Democratic colleague sat" a long time ago. `Dirksen is the only one Nyhu is better than he looks.' His latest exercise is an example of that habit of Dirksen's to look worse than he is which hY now must be accepted as a tactic. Something , his nature seems to enjoy deception and surpris.e' and for six years now he has indulged those pleasures by deceiving and yet never disillusion; ing those orthodox Republicans who cherish as their pastor. He first intruded upon t1,1,'1 national: consciousness when he fought Is'n'fl passion, scorn and contumely against the East!':., hordes who ran over Robert A. Taft at the Vif,e Republican Convention. Dirksen must ha% known that Taft was beaten when he stood .1-,i defiant beside him; that was the one principle

public moment of his life and he won from it a moral capital he can never lose with those Republicans whose hearts are buried with Taft.

Ever since, Dirksen has pursued a public career whose effect has been one of repetitive deceptions of those who trust him and of con- tinually pleasant surprise to those who distrust him. He has moved in this mysterious, con- sensus-bringing fashion on the Civil Rights Bill. When it came to the Senate in March, he was a removed bystander always implying that he might turn into a dangerous enemy. He waited until April to state his objections, and, when he Made them, they were perfectly designed to unite the uncommitted Republicans behind them.

The normal Republican Senator is unaffected by the protests of the unwashed white against the well-scrubbed Negro. But he does feel a kinship with those businessmen who are un- comfortable with that portion of the Bill which would forbid them to deny an applicant a job because of his religion or his race, if only be- cause it threatened them with the burden of keeping more records and entertaining more Federal officials. When he spoke out at last, Dirksen concentrated on those features of the Bill which would charge the Federal Govern- ment to eliminate discrimination in employment; he intended, he said, to offer at least seventy amendments to that section.

The few committed Republicans cried out that Dirksen was destroying the Bill; he summoned them to Meet with the uncommitted others. in a Party caucus; there they found him gracious, open to discussion but, in the letter of his words at least, plainly sympathetic to the Bill's oppon- ents. One Republican Senator said that he had no patience with amendments; he was for voting the Bill down; Dirksen answered that he too might like to vote it down,' but he knew that he didn't have the troops. The process of entrap- ment had begun; he had already dropped forty of his seventy original amendments; when the afternoon was over, he was down to seventeen. For the rest of the week, he went on anointing the Bill's opponents and bargaining with its sup- porters. Then he arose before the Senate to offer ten amendments to the employment dis- crimination section, all of them cleared with the minority of Republicans who are for hard civil rights legislation and none of them substantial:

Dirksen had once again put the rule of reason above his convictions and saved the sum of things for pay. This latest of his healing decep- tions Was almost complete; now he could think about the Republican Convention. He will begin his course there as a Goldwater delegate from Illinois. Poor Goldwater. Who deals with Dirksen walks on water.