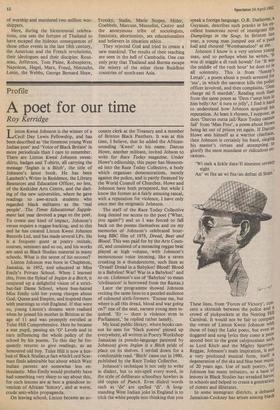 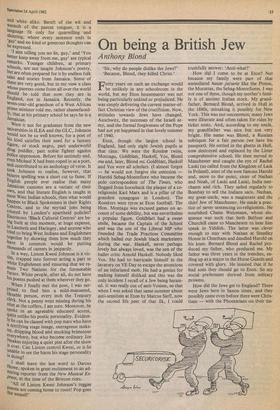 A poet for our time

T inton Kwesi Johnson is the winner of a la Cecil Day Lewis Fellowship, and has been described as 'the foremost young West Indian poet' and 'Voice of Black Britain' in more periodicals than I care to remember. There are Linton Kwesi Johnson sweat- shirts, badges and T-shirts, all carrying the message 'Inglan is a Bitch', the title of Johnson's latest book. He has been Lambeth's Writer in Residence, the Library Resources and Education Officer, no less, of the Keskidee Arts Centre, and the darl- ing of the new universities, where he gave readings to awe-struck students who regarded black militants as the 'real people'. The Times Educational Supple- ment last year devoted a page to the poet. To create any kind of impact, Johnson's verses require a reggae backing, and to this end he has created Linton Kwesi Johnson Records Ltd, and has made several LPs, He is a frequent guest at poetry recitals, courses, seminars and so on, and his works are used as Black Studies material in many schools. What is the secret of his success?

Linton Johnson was born in Chapleton, Jamaica, in 1952, and educated at Miss Emily's Private School. When I learned this, from the flyleaf of Inglan is a Bitch, it conjured up a delightful vision of a strict- but-fair Dame School, where bun-haired Miss Emily told her young charges about God, Queen and Empire, and inspired them with yearnings to visit England. If that were so, young Linton's dreams were realised when he joined his mother in Brixton at the age of 11 and was promptly enrolled at Tulse Hill Comprehensive. Here he became a star pupil, passing six '0' Levels and in turn influencing the whole policy of the school by his poems. To this day he fre- quently returns to give readings, as an honoured old boy. Tulse Hill is now a hot- bed of Black Studies,a fact which'Lord Scar- man finds admirable but about which West Indian parents are somewhat less en- thusiastic. Miss Emily would probably have had something very sharp to say about this, for such lessons are at best a grandiose in- vention of African 'history', and at worst, crude anti-white propaganda.

On leaving school, Linton became an ac- counts clerk at the Treasury and a member of Brixton Black Panthers. It was at this time, I believe, that he added the African- sounding 'Kwesi' to his name. Darcus Howe, another militant, invited Johson to write for Race Today magazine. Under Howe's editorship, this paper has blossom- ed into the Race Today Collective, a body which organises demonstrations, mostly against the police, and is partly financed by the World Council of Churches. Howe and Johnson have both prospered, but while I know the former as a fairly amusing rascal, with a reputation for violence, I have only once met the enigmatic Johnson.

The staff of the Race Today Collective long denied me access to the poet ('What, you again?') and so I was forced to fall back on the poems themselves and on my memories of Johnson's celebrated hour- long BBC film of 1978, Dread, Beat and Blood. This was paid for by the Arts Coun- cil, and consisted of a menacing reggae beat played at high volume, with Johnson's monotonous voice intoning, like a raven croaking in a thunderstorm, such lines as 'Dread! Dread in a Babylon! Blood! Blood in a Babylon! War! War in a Babylon!' and so on. (Johnson's use of 'Babylon' to mean `civilisation' is borrowed from the Rastas.)

Later the programme showed Johnson reciting the same lines to a puzzled audience of coloured sixth-formers. 'Excuse me, but where is all this dread, blood and war going on?' one of the neat, earnest young men in- quired. 'Er — there is violence even in Parliament,' he replied rather lamely.

My local public library, where books can- not be seen for 'black poems' pinned up everywhere, all written in Poetry Workshop Jamaican (a pseudo-language patented by Johnson) gives Inglan is a Bitch pride of place on its shelves. I settled down for a comfortable read. 'Bitch' came out in 1980, published by the Race Today Collective.

Johnson's technique is not only to write in dialect, but to mis-spell every word, in the style of deliberate schoolboy howlers in old copies of Punch. Even dialect words such as 'de' are spelled 'di'. A long- standing West Indian joke in England is to trick the white people into thinking that you speak a foreign language. O.R. Dathorne, Guyanan, describes such pranks in his ex- cellent humorous novel of immigrant life Dumplings in the Soup. In Brixton last year, a young man jumped out of a pool hall and shouted 'Wombamaloo!' at me.

Johnson I know is a very serious young man, and so perhaps when he writes, 'It woz di miggle a di rush howah' for 'It was the middle of the rush hour' he does so in all solemnity. This is from `Sonny's Lettah', a poem about a youth arrested for `sus', in which the narrator kills the police officer involved, and then complains, 'Doi charge mi fi murdah'. Reading such lines from the same poem as 'Dem t'ump him in him belly/An' it turn to jelly', I find it hard to understand how Johnson acquired his reputation. At least it rhymes, I suppose, as does `Darcus outta jail/Race Today cannot fail' from 'Man Free', a poem about Howe being let out of prison yet again. If Darcus Howe sees himself as a warrior chieftain, then Johnson is certainly his bard, singing his master's virtues and attempting to glorify the most mundane or ridiculous oc- casions.

These lines, from 'Forces of Victory', con- cern a skirmish between the police and a crowd of pickpockets at the Notting Hill Carnival. It would not be fair to compare the verses of Linton Kwesi Johnson with those of (say) the Lake poets, but even as doggerel and song lyrics they come a poor second best to the great calypsonians such as Lord Kitch and the Mighty Sparrow. Reggae, Johnson's main inspiration, is not a very profound musical form, itself a degeneration of the sk a and blue beat music of 20 years ago. Use of such poetry, for Johnson has many imitators, as a base of lessons in Black Studies has wreaked havoc in schools and helped to create a generation of rioters and illiterates.

In some immigrant districts, a debased Jamaican-Cockney has arisen among black and white alike. Bereft of the wit and warmth of the parent tongues, it is a language fit only for quarrelling and shouting, where every sentence ends in `guy' and no kind or generous thoughts can be expressed.

aint telling you no lie, guy,' and 'You better keep away from me, guy' are typical remarks. Younger children, at primary schools, are not taught Johnson's poetry, but are often prepared for it by endless folk tales and stories from Jamaica. Some of these are very good, but in my view a class Whose parents come from all over the world should be told that now they are in England, not in Jamaica. Recently, the seven-year-old grandson of a West African prune minister told me, rather shamefaced- that at his primary school he says he is a Jamaican.

Were it not for graduates from the new Universities in ILEA and the GLC, Johnson would not be so well known, for a poet of his kind satisfies their need for a fantasy figure, or stock negro, part underworld drug peddler, part noble fighter against Police oppression. Before his untimely end, even Michael X had been roped in as a poet, and contributed to an anthology of verse. It look Johnson to realise, however, that bizarre spelling was a short cut to fame. If English people ever realise that many Jamaican customs are a variant of their Own, and that literate English is taught in Most West Indian schools, then what would happen to Black Spokesmen in their Rights Centres, and to the myriad jobs being created by London's apartheid policies? Enormous 'Black Cultural Centres' are be- !rig built at this moment, at huge expense, in Lambeth and Haringey, and anyone who tried to bring West Indians and Englishmen together by showing them how much they have in common would be putting thousands of careers in jeopardy. In a way, Linton Kwesi Johnson is a vic- tim, trapped into forever acting a part to white Englishmen and ensuring that we re- main Two Nations for the foreseeable future. White people, after all, do not have his Poems pushed at them wherever they go.

When I finally met the poet, I was sur- Prised to find him a mild-mannered, likeable person, every inch the Treasury clerk. Not a penny went missing during his stint at the coffers, I am sure. Moreover, he spoke in an agreeable educated accent, quite unlike his poetic personality. Evident- lY he can be classed with pop stars who have a terrifying stage image, outrageous make- UP, dripping blood and smoking brimstone everywhere, but who become ordinary Joe Noakes enjoying a quiet pint after the show over. Can Linton control Kwesi, or is he unable to see the harm his stage personality is doing?

I shall leave the last word to Darcus Howe, spoken in great excitement to an ad- nUring reporter from the New Musical Ex- press, at the time of the Brixton riots.

All of Linton Kwesi Johnson's reggae poems are coming home to roost! Pop goes the weasel!'