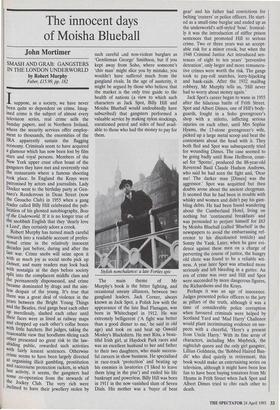 SMASH AND GRAB: GANGSTERS IN THE LONDON UNDERWORLD by Robert Murphy Faber, £15.99, pp. 182 Isuppose, as a society, we have never been quite so dependent on crime. Imag- ined crime is the subject of almost every television series, real crime sells the Sunday papers, and in Northern Ireland, where the security services offer employ- ment to thousands, the enormities of the IRA apparently sustain the flagging economy. Criminals seem to have acquired a glamour which has now been lost by film stars and royal persons. Members of the New York upper crust often boast of the gangsters they have met and reverently visit the restaurants where a famous shooting took place. In England the Krays were Patronised by actors and journalists. Lady Docker went to the birthday party at Gen- naro's Rendezvous in Dean Street (now the Groucho Club) in 1955 when a gang leader called Billy Hill celebrated the pub- lication of his ghosted autobiography, Boss of the Underworld. If it is no longer true of the snobbish English that they 'dearly love a Lord', they certainly adore a crook.

Robert Murphy has turned much careful research into a readable account of profes- sional crime in the relatively innocent decades just before, during and after the last war. Crime snobs will seize upon it with as much joy as social snobs pick up Debra t, and many readers may look back with nostalgia at the days before society split into the complacent middle class and the permanently dispossessed, and crime became dominated by drugs and the aim- less despair of the young. It's true that there was a great deal of violence in the Years between the Bright Young Things and the Beatles, rival gangs beat each other UPmercilessly, slashed each other until their faces were as lined as railway maps and chopped up each other's collar bones with little hatchets. But judges, taking the reasonable view that hoodlums slicing each other presented no great risk to the law- abiding i—ng public, rewarded such activities with fairly lenient sentences. Otherwise crime seems to have been largely directed at organising illicit gambling, prostitution and racecourse protection rackets, in which last activity, it seems, the gangsters had some co-operation from the stewards of theJockey Club. The very rich were inclined to have their jewellery stolen by

such careful und non-violent burglars as `Gentleman George' Smithson, but if you kept away from Soho, where someone's `chiv man' might slice you by mistake, you wouldn't have suffered much from the gangland rivals. In the age of austerity, it might be argued by those who believe that the market is the only true guide to the health of nations (a view to which such characters as Jack Spot, Billy Hill and Moisha Blueball would undoubtedly have subscribed) that gangsters performed a valuable service by making nylon stockings, unrationed petrol and sides of beef avail- able to those who had the money to pay for them.

Stylish nonchalance: a late Forties spiv The main theme of Mr Murphy's book is the bitter fighting, and occasional uneasy alliances, between two gangland leaders. Jack Corner, always known as Jack Spot, a Polish Jew with the appearance of the late Bud Flanagan, was born in Whitechapel in 1912. He was extremely belligerent CA fight was better than a good dinner to me,' he said in old age) and took on and beat up Oswald Mosley's Blackshirts. He met Rita, a beau- tiful Irish girl, at Haydock Park races and was an excellent husband to her and father to their two daughters, who made success- ful careers in show business. He specialised in race-track 'protection' and beating up his enemies in lavatories CI liked to leave them lying in the piss') and ended his life bankrupt and powerless. Billy Hill was born in 1911 in the now vanished slum of Seven Dials. His mother was a 'buyer of bent

gear' and his father had convictions for belting `cozzers' or police officers. He start- ed as a small-time burglar and ended up as the underworld's self-styled 'boss'. Ironical- ly it was the introduction of stiffer prison sentences that promoted Hill to serious crime. Two or three years was an accept- able risk for a minor crook, but when the 1948 Criminal Justice Act introduced sen- tences of eight to ten years' preventive detention', only larger and more remunera- tive crimes were worth the risk. The gangs took to pay-roll snatches, lorry-hijacking and bank-raids. After the 1932 mailbag robbery, Mr Murphy tells us, 'Hill never had to worry about money again.'

Jack Spot's career began to wane in 1955 after the hilarious battle of Frith Street. Spot and Albert Dimes, one of Hill's body- guards, fought in a Soho greengrocer's shop with a stiletto, inflicting serious injuries on each other, until Mrs Sophie Hyams, the 13-stone greengrocer's wife, picked up a large metal scoop and beat the contestants about the head with it. They both fled and Spot was subsequently tried for wounding Dimes. The case seemed to be going badly until Rose Heilbron, coun- sel for `Spotto', produced the 88-year-old Reverend Basil Claude Hudson Andrews, who said he had seen the fight and, 'Dear me! The darker man [Dimes] was the aggressor.' Spot was acquitted but then doubts arose about the ancient clergyman. It seemed that he had been in trouble with whisky and women and didn't pay his gam- bling debts. He had been found wandering about the Cumberland Hotel, living on nothing but 'continental breakfasts' and was persuaded to perjure himself for £63 by Moisha Blueball (called 'Bluebell' in the newspapers to avoid the embarrassing ref- erence to his discoloured testicle) and Sonny the Yank. Later, when he gave evi- dence against these men on a charge of perverting the course of justice, the hungry old cleric was found to be a reliable wit- ness. A year later Spot was attacked more seriously and left bleeding in a gutter. An era of crime was over and Hill and Spot were succeeded by more dangerous figures, the Richardsons and the Krays.

Perhaps it was an age of innocence. Judges presented police officers to the jury as pillars of the truth, although it was a time of considerable police corruption when favoured criminals were helped by Scotland Yard and 'Mad Harry' Challenor would plant incriminating evidence on sus- pects with a cheerful, 'Here's a present from Uncle Harry.' With its fine array of characters, including Mrs Maybrick, the nightclub queen and the only girl gangster, Lillian Goldstein, the 'Bobbed Haired Ban- dit' who died quietly in retirement, this book would make an entertaining series on television, although it might have been less fun to have been buying tomatoes from Mr Hyams in Frith Street when Jack Spot and Albert Dimes tried to chiv each other to death.