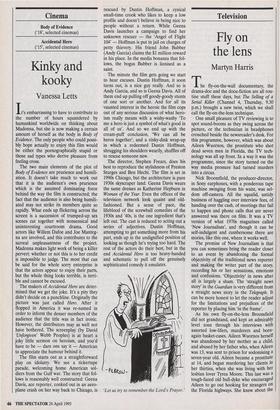 It's embarrassing to have to contribute to the number of hours squandered by humankind worldwide on thinking about Madonna, but she is now making a certain amount of herself as the body in Body of Evidence. The only people who could possi- bly hope actually to enjoy this film would be either the pornographically stupid or those sad types who derive pleasure from feeling cross.

The two main elements of the plot of Body of Evidence are prurience and humili- ation. It doesn't take much to work out that it is the audience's own prurience which is the assumed dominating force behind the way the film is constructed; the fact that the audience is also being humili- ated may not strike its members quite so rapidly. What ends up flickering across the screen is a succession of trumped-up sex scenes cut together with nonsensical and uninteresting courtroom drama. Good actors like Willem Dafoe and Joe Manteg- na are involved, and this contributes to the surreal unpleasantness of the project. Madonna makes light work of being a killer pervert: whether or not this is to her credit is impossible to judge. The most that can be said for the whole sorry enterprise is that the actors appear to enjoy their parts, but the whole thing looks terrible, is terri- ble and cannot be excused.

The makers of Accidental Hero are deter- mined that we get the joke. It's a pity they didn't decide on a punchline. Originally the picture was just called Hero. After it flopped in America it was re-named in order to inform the denser members of the audience that the title was in fact ironic. However, the distributors may as well not have bothered. The screenplay (by David 'Unforgiven' Webb Peoples) is at heart a joky little sermon on heroism, and you'd have to be — dare one say it — American to appreciate the humour behind it.

The film starts out as a straightforward play on idolatry. We see a tickertape parade, welcoming home American sol- diers from the Gulf war. The story that fol- lows is reasonably well constructed: Geena Davis, ace reporter, conked out in an aero- plane crash on her way back to Chicago, is rescued by Dustin Hoffman, a cynical small-time crook who likes to keep a low profile and doesn't believe in being nice to people without a return. While Geena Davis launches a campaign to find her unknown rescuer — the 'Angel of Flight 104' — Hoffman is put in jail on charges of petty thievery. His friend John Bubber (Andy Garcia) claims the $1 million reward in his place. In the media bonanza that fol- lows, the bogus Bubber is lionised as a saint.

The minute the film gets going we start to hear excuses. Dustin Hoffman, it soon turns out, is a nice guy really. And so is Andy Garcia, and so is Geena Davis. All of them end up pulling off goody-goody stunts of one sort or another. And for all its vaunted interest in the heroic the film cops out of any lerious discussion of what hero- ism really means with a wishy-washy 'To me a hero is just a symbol of what's good in all of us'. And so we end up with the cream-puff conclusion, 'We can all be heros together', and a Tinley-clink wrap-up in which a redeemed Dustin Hoffman, shrugging his shoulders wearily, shuffles off to rescue someone new.

The director, Stephen Frears, does his best to reproduce the stylishness of Preston Sturges and Ben Hecht. The film is set in 1990s Chicago, but the architecture is pure 1930s skyscraper land. Geena Davis wears the same dresses as Katherine Hepburn in Woman of the Year. Even the offices of the television network look quaint and old- fashioned. But a sense of pace, the lifeblood of the screwball comedies of the 1930s and '40s, is the one ingredient that's left out. The cast is reduced to acting out a series of adjectives. Dustin Hoffman, attempting to get something more from his part, ends up in the undignified position of looking as though he's trying too hard. The rest of the actors do their best, but in the end Accidental Hero is too heavy-handed and schematic to pull off the genuinely sophisticated comedy it emulates.

'Let us try to remember the Lord's Prayer.'