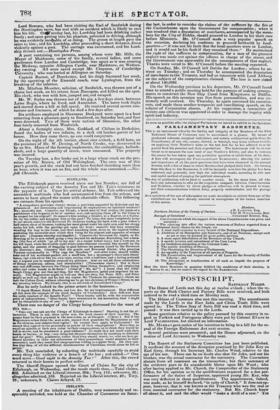 The Edinburgh papers received since our last Number, are full of the exciting subject of the Annuity. Tax and Mr. Tait's resistance to the payment of it. Upon his arrival at home, Mr. Tait addressed the assembled multitude who had accompanied him from the prison, and seems to have played the orator with admirable effect. The following are extracts from his speech.

" A compulsory provision simply means, a provision supported by distraint and im- prisonment. Are distraining and imprisoning fit employments for spiritual teachers ? No; assuredly not. Conceive, my friends, a meek man'of God seizing the goods of a parishioner who happens to be of another sect, and carrying them off to the Cross to be rouped for his stipend ! Or conceive him seizing a Seceder, or a Baptist, or a Catho- lic, by the collar, and dragging him to the gaol? To bring this more completely home to our minds, conceive the Reverend Dr. Brunton loadiug his back with a poor widow's half rotten chest of drawers, tucking her meal-giroel under his right arm, and her creepy sander his left, with the porridge-pot upon his head ; conceive him thus accoutred, wending his way to the Cross, and there knocking them dawn to the highest bidder, pocketing the miserable sum which they bring fur his stipend and expenses of seizure aud•stle. (Immense cheering and laughter.) Conceive the Reverend Dr. Inglis, or Dr. Horning as he is now called, going a step beyond his nickname, fluttrishiug, not ahem- * (the fees of which • go all to my son,' as a recent ballad says), but a CAPTION, in his left hand, while his terrible right seizes some obdurate recusant, like myself, by the "sonar, and the process of dragging to gaol follows the process raised by the Reverend Dr. Horning's son. Conceive that the gentle and Reverend Doctor, who preaches Toryism occasionally to ' Why rage the Heathen ?' and other texts, should mildly take out of his waistcoat-pocket, not a snuff-box, but a messenger's three-inch ebony baton. tipt with silver like his own voice, saying with a half-bow, and a loving paternal air, I request you to consider yourself my prisoner. And-are not all these conceptions of things monstrous, odious, and abominable? (Tremendous cheers.) But is there any real difference between the Clergy doing these things themselves, and employing other and ruder hands to do them ? (Cries of " No, mil") I know that the Edin- burgh Clergy give out that•net• they, but the Magistrates, poind•and imprison fur an- nuity. The Magistrates might as well say that nut they, but Peter Hill ; and Peter eight as well say, that not he. but my captor, Mr. Thomson the messenger, thrust me into the Calton Gaol, without allowing me to go two divisions of Prince's Street, to see any morning letters. My friends, this is an old trick of Established Clergy."

But he only looked to the prime actors in the business-

. "I thank Messrs. Baird, Brown, and Lee. &e., for my imprisonment. How different all this from the example of the meek founder of Christianity How different from the noble conduct of the Apostle Paul! 'These bands,' said he, with the warrantable pride of independence, " these hands have ministered to my necessities, that 1 might not be chargeable to any of you.' " (Appinuse.)

this tax.— "Does any one ask are the Clergy of Edinburgh to starve? Starving is not the al- ternative. There is not, there never was, the least chance of their starving. The roper fund thr their payment is the seat-rents, as at Glasgow. (Cheers.) But if the Magistrates refusehem the sett-rents, cannot they prosecute the Magistrates as well se the citizens, and enforce their rights? Or cannot they apply to Parliament? Or cannot they appeal to the generosity. or justice or their congregations ? Have they so small an opinion of their own value to their congregations, as to think they would be left to starve, and be considered a good riddance ? Or could they not work with their bands, or borrow, or beg,—any thing but disgrace themselves by resorting to distraint and the gaol? Why. gentlemen, rather than they should starve, we, who are here ga- thered together to show our abhorrence of their proceedings, would minister to their necessities. until they could find congregations willing to support them. Do they con- fess that they, of all the different denominations of Christians, would alone be left to perish." Mr. Tait concluded, by exhorting the multitude carefully to avoid every thing like violence or a breach of the law ; and added—" One word more— Good night to the Annuity Tax ! " After this, the crowd returned to their homes in perfect order.