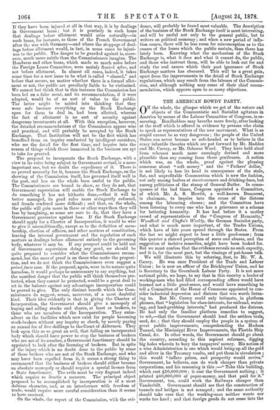 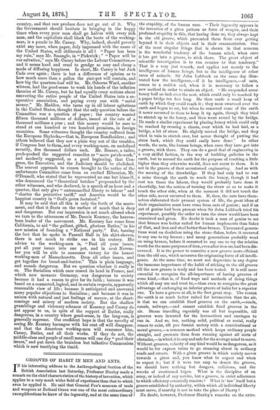 It may be said that all this is only the froth of the move- ment, and that it floats on the surface of much that is deep and dangerous. But our impression is not much altered when we turn to the utterances of Mr. Dennis Kearney, the heaven- born leader of the movement. Mr. Kearney has come from California, to aid "the gallant, gifted, glorious Butler," in his new mission of founding a "National party." But, barring the fact that he spoke in Faneuil Hall in his shirt-sleeves, there is not much to strike one in his oratory. His advice to the working-men is, "Pool all your issues, put all your issues into one pot, and in next Novem- ber you will be able to announce victory for the honest working-men of Massachusetts. Drop all other issues, and get together for bread-and-butter." This is plain language, and sounds dangerous. But we question whether it really is so. The Socialism which once reared its head in France, and which now menaces Germany, was dangerous to society because it had a reason to give for its faith ; because it was based on a connected, logical, and in certain respects, apparently reasonable view of life ; because it anticipated and answered many popular objections to Socialism ; and because it was in unison with natural and just feelings of sorrow, at the short- comings and misery of modern society. But the shallow grumblings and visionary schemes of Kearney and Carsey do not appear to us, in spite of the support of Butler, really dangerous, in a country where good-sense, in the long-run, is generally supreme. Our confident hope is that the novelty of seeing Mr. Kearney harangue with his coat off will disappear, and that the American working-men will renounce him, Carsey, Butler, and all their works. If they do not, the middle-class and people of small means will one day "pool their issues," and put down the brainless but talkative Communism which is now terrifying the timid.