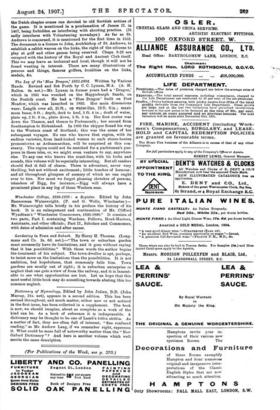 Hands. Revised and Set Forth by C. C. Lynam, M.A. (A. H. Bullen. 6s. net.)—Mr. Lynam in former years had a ` Dragon,' which in 1891 was wrecked on the Happisburgh Sands, on the Norfolk coast. He had a ' Blue Dragon' built on Port Meadow, which was launched in 1892. Her main dimensions were: Length over all, 25ft.; on water-line, 19 ft. 6in.; maxi- mum beam, 9 ft. ; depth, deck to keel, 5 ft. 4 in. ; draft of water, plate up, 2 ft. 9 in., plate down, 5 ft. 3 in. Her first cruise was down the Thames, and thence to Portsmouth ; her second from Southampton to Birkenhead. In 1893 the skipper found his way to the Western coast of Scotland; this was the scene of her subsequent voyages. No one who knows that region, with its endless varieties, from land-locked waters to such storm-beaten promontories as Ardnamurchan, will be surprised at this con- stancy. The region could not be matched for a yachtsman's pur- poses in these isles, or, we might even venture to say, anywhere else. To any one who knows the coast-line, with its lochs and sounds, this volume will be especially interesting. But all readers should find it full of charm. There is adventure, never very thrilling, but not without excitement ; little touches of humour ; and all throughout glimpses of scenery of which no one ought ever to tire. Nor must we forget pleasing sketches of persons, islanders of Eigg, for instance,—Eigg will always have a prominent place in any log of these Western seas.