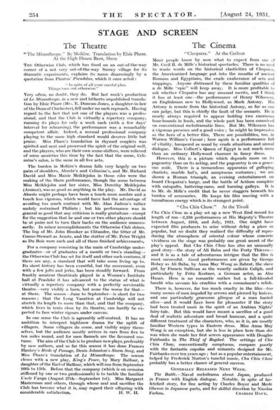 Cleopatra." At the Carlton

MOST people know by now what to expect from one of Mr. Cecil B. de Mille's historical spectacles. There is no need to waste words on the historical elasticities of Cleopatra, the Americanized language put into the mouths of ancient Romans and Egyptians, the crude exuberance of sets and trappings. Anyone distressed by these familiar qualities of a de Mille "epic" will keep away. It is more profitable to ask whether Cleopatra has any unusual merits, and I think it has at least one—the performance of Henry Wilcoxon, an Englishman new to Hollywood, as Mark Antony. His Antony is remote from the historical Antony, so far as one can judge, but this is chiefly the fault of the scenario. He is nearly always required to appear holding two enormous boar-hounds in leash, and the whole part has been conceived on conventional melodramatic lines. But Mr. Wilcoxon has a vigorous presence and a good voice ; he might be impressive as the hero of a better film. There are possibilities, too, in Warren William's Caesar ; here again is a performance full of vitality, hampered as usual by crude situations and unreal dialogue. Miss Colbert's Queen of Egypt is not much more than an ordinary Hollywood charmer in fancy dress.

However, this is a picture which depends more on its pageantry than on its acting, and the pageantry is on a gener- ous scale. There is a tremendous apparatus of galloping ehariots, marble hal!s, and sumptuous costumes ; we are shown a Roman triuMph, an evening entertainment on board CIeopatra's barge, and the battle of Actium complete with catapults, battering-rams, and burning galleys. It is to Mr. de Mille's credit that he never staggers beneath his burden of accessories. He keeps his film moving with a tumultuous energy which is its strongest point.