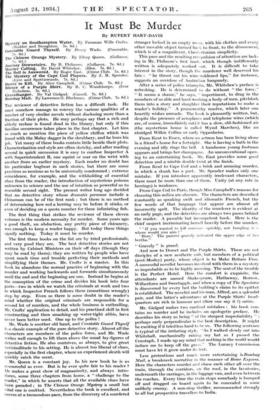 It Must Be Murder

The Chinese Orange Mystery. By Ellery Queen. (Gollancz. is. 6d.)

THE reviewer of detective fiction has a difficult task. He must somehow manage to convey the various qualities of a number of very similar novels without disclosing more than a fraction of their plots. He may perhaps say that a rich and elderly recluse is found dead in the library, but only if this familiar occurrence takes place in the first chapter. Let him so much as mention the piece of yellow chiffon which was found with the Malay dagger in the shrubbery, and he loses his job. Yet many of these books contain little beside their plots. Characterization and style are often sketchy, and after reading several in quick succession it is easy to confuse Inspector A with Superintendent B, one squint or scar on the wrist with another from an earlier mystery. Each reader no doubt has his particular bugbear in such stories, but there are some practices so noxious as to be universally condemned ; extreme coincidence, for example, and the withholding of essential clues from the reader, the introduction of mysterious poisons unknown to science and the use of intuition so powerful as to resemble second sight. The present writer long ago decided that no detective story whose dramatis personae include a Chinaman can be of the first rank ; but there is no method of determining how red a herring may be before it stinks, or even of deciding on a quota number for these infuriating fish.

The first thing that strikes the reviewer of these eleven volumes is the modern necessity for murder. Some years ago a good theft, an abduction, any pretty piece of chicanery, was enough to keep a reader happy. But today these things signify nothing. Today it must be murder.

The first three books on the list are by tried professionals, and very good they are. The best detective stories are not written by Cabinet Ministers on their off days (though they may be read by them): they are written by people who have spent much time and trouble perfecting their methods and simplifying their themes. Mr. Crofts is a master. In this book he abandons the normal practice of beginning with the murder and working backwards and forwards simultaneously until the end and the beginning are one. Instead he begins at the conception of the crime and divides his book into four parts—two in which we watch the criminals at work and two in which Inspector French follows them (sometimes wrongly) step by step. Even so there is some doubt in the reader's mind whether the original criminals are responsible for a second lot of murders, and the whole business is enthralling. Mr. Crofts' application to detail, and his practised skill in first constructing and then smashing up water-tight alibis, have never been better used. One up to the police !

Mr. Wade is another old hand, and Constable Guard Thyself is a classic example of the pure detective story. Almost all the characters are members of the police force, and Mr. Wade writes well enough to lift them above the usual lay-figures of detective fiction. He also contrives, as always, to give great verisimilitude to his setting. He is almost too liberal of clues, especially in the first chapter, where an experienced sleuth will quickly catch the scent.

Mr. Queen is a constant joy. In his new book he is as resourceful as ever. But is he ever quite fair to his reader ? Be makes a great show of magnanimity, and always intro- duces, some three chapters from home, a " challenge to the reader," in which he asserts that all the available clues have been paraded ; in The Chinese Orange Mystery a small but vital one is omitted. Nevertheless the book is excellent, and moves at a tremendous pace, from the discovery of a murdered stranger locked in an empty room, with his clothes and every other movable object turned back to front, to the denouement, which is of a magnificent, Chestertonian

This pace and the resulting compulsion of attention are lack- ing in Mr. Philmore's first book, which though indifferently written is adequately worked out. It is difficult to take interest in the story, though the murderer well deserved his fate : " he thrust out his wine-reddened lips," for instance, suggests an overdose of Australian burgundy.

After a series of police triumphs, Mr. Whitelaw's preface is refreshing. He is determined to do without " the foree.” " It seems a shame," he says, " impertinent, to drag in the members of so able and hard-working a body of men, pitchfork them into a story and slaughter their reputations to make a reader's holiday." A praiseworthy resolve, which later one heartily wishes unmade. The book is pleasantly written, but, despite the presence of aeroplanes and telephone wires (which are, of course, immediately cut) it has a slow, old-fashioned air (the mysterious house is called Wynd Marches), like an abridged Wilkie Collins or early Oppenheim.

From Kent to Essex, where an actress has been living alone in a friend's house for a fortnight. She is having a bath in the evening and idly rings the bell. A handsome young footman appears and brings her champagne. An unconventional open- ing to an entertaining book. Mr. East provides some good detection and a nimble double twist at the finish.

From Kent to Cape Cod and a brisk and amusing murder, in which a skunk has a part. Mr. Spender makes only one mistake. If you introduce apparently irrelevant characters, there must be more than one of them. Unity (at any rate in herrings) is weakness.

From Cape Cod to Paris, though Miss Campbell's reasons for choosing this milieu are obscure. The characters are described constantly as speaking swift and idiomatic French, but the few words of that language that appear are almost all incorrectly spelt. The identity of the murderer is evident at an early page, and the detectives arc always two paces behind the reader. A passable but incompetent book. Here is the chief suspect incriminating herself heavily before the murder.

" If you wanted to kill someone—quickly, not bungling it— where would you aim ? '

' Here.' The painter gravely indicated the upper edge of her bertha."

And now to Dorset and The Purple Shirts. These are not disciples of a new aesthetic cult, but members of a political (post-Mosley) party, whose object is to Make Britain Free. A successful novelist becomes involved with them in a mystery so improbable as to be highly amusing. The seat of the trouble is the Perfect Hotel. Here the comfort is exquisite, the attendants are named Shakespeare, Hathaway, Borrow, Wilberforce and Sweetapple, and when a copy of The Spectator is discovered by every bed the building's claim to its epithet is established. The novelist and his man, Alfred, are a splendid pair, and the latter's adventures at the Purple Shirts head- quarters are rich in humour and (dare one say it ?) satire.

Mr. Gielgud makes two cardinal mistakes : his book con- tains no murder and he includes an apologetic preface. He describes his story as being " of the steepest improbability : perhaps early perpendicular is the best description. It might be exciting if it tried less hard to be so. The following sentence is typical of the irritating style. "As I walked slowly out into Whitehall, mechanically raising my hat as I passed the Cenotaph, I made up my mind that nothing in the world would induce me to keep off the grass." The Lunacy Commission must have let it grow under its feet.

Less pretentious and much more entertaining isBombay Mail, a breakneck narrative in the manner of Rome Empress. Here the characters murder and chase each other all over the train, through the corridors, on the roof, in the lavatories, underneath the carriages, in the luggage van, and even between the coaches. Every time the train stops somebody is bumped off and dragged on board again to be concealed in some unlikely cranny. A non-stop thriller, recommended strongly to all but prospective travellers to India.