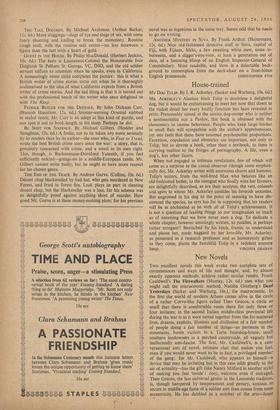 BE SHOT FOR SIXPENCE. By Michael Gilbert. (Hodder and Stoughton,

12s. 6d.) A frolic, not to be taken any more seriously by its readers than by its author—the man who, in Fear to Tread, wrote the best British crime story since the war: a story, that is, genuinely concerned with crime, and a novel in its own right. This, though, is Buchanesque-Dornford Yatesish, if you feel sufficiently unkind—goings-on in a middle-European castle. Mr. Gilbert cannot write badly, but he ought to have more respect for his chosen genre.