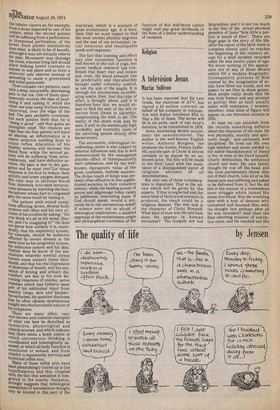 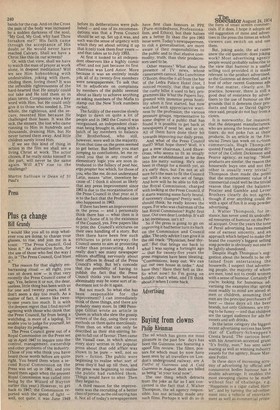 It has been reported that Sir Lew Grade, the chairman of ATV, has signed a £3 million contract on behalf of his company in conjunction with Italian television RIA to film a life of Jesus. The series will be in six parts, each of one hour's duration, to be transmitted in 1976. Some interesting details accompany the announcement. The author is the well-known English writer, Anthony Burgess; the producer the Italian, Franco Zeffirelli, and the part of Christ is almost certainly to be played by an unknown actor. The film will be made in the Holy Land with the assistance of a distinguished panel of religious advisers of all denominations.

But only one of these considerations is important. That is the advice which will be given by the experts. If that is neglected and the usual kind of Hollywood scenario is produced, the result could be a religious disaster. The real nub is the character of Christ Himself, What kind of man was He and how does He appear in human encounter? The Gospels are not biographies, and it is not too much to say that of the actual physical presence of Jesus "how little a portion is heard of Him". There are huge gaps in the story of His life. After the report of His birth there is complete silence until he reaches the beginning of His ministry except for a brief incident recorded when He was twelve years of age. We know nothing of His appearance nor of any of those details which fill a modern biography. Consequently pictures of 'Him created by the imagination of artists have filled our minds, and we expect to see Him in these guises. Most people really doubt that He was truly human and any attempt to portray Him as such usually meets with resistance. I wonder, therefore, what kind of figure will appear on our television screens in 1976.

At least we can establish from the records something definite about the character of the man. He was physically, morally and spiritually tough, and extremely well disciplined. He lived out His own high idealism and never yielded to the subtle blandishments of friend or foe, or even of the Devil himself. Utterly defenceless He withstood church and state. His own family thought He was off His head, and the local parishioners threw Him out of their church. Like all of us He feared pain and suffering and asked to be delivered from it, but He did this in the context of a tremendous inner struggle which turned His sweat into blood. Was He wrestling then with a host of demons who tormented and haunted Him.with the thought that perhaps after all He was mistaken? And then the final clinching moment of conviction came, and He reached out His hands for the cup. And on the Cross the pain of the body was increased by a sudden darkness of the soul, "My God, My God, why hast Thou forsaken me?" His faith came through the acceptance of His doubt or He would never have reached Calvary. Shall we have a Christ like this on our screens?

Or, with that view, shall we have to watch the man of prayer at work alone, in deepest meditation? Will we see Him hobnobbing with undesirables, joking with them, chiding them, loving them? It was the inflexible righteousness of the hard-hearted that He simply could not take and He told them so in plain terms. Compassion was a key word with Him, but He could only give it to those who needed it. The whole, the righteous, and the secure, resented Him because He challenged their bases. It was the sick, the sinners, the lost who came running to Him in hundreds and thousands, draining Him, but He never turned them away. And little children surely loved Him.

If we see this kind of thing in action in the film we shall see a living Christ at work. The actor chosen, if he really sinks himself in the part, will never be the same again. Will ATV rise to the challenge?