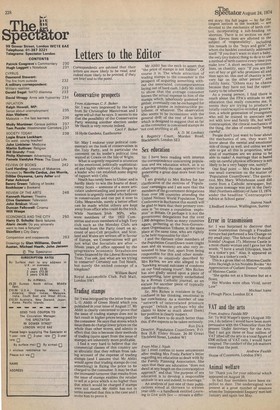 Sir: I must confess to some amusement after reading Mrs Freda Parker's letter regarding sex education as dealt with by the Family Planning Association. She says that their sex education "does not dwell at any length on the contraceptive approach" and that "the purpose of sex education is CO develop a responsible attitude to sex and indeed, to marriage."

An analysis of just one of their publications aimed at thirteen to sixteen year-olds — a handbook entitled Learning to Live with Sex — reveals a differ ent story. Six full pages — by far the longest section in the booklet — are devoted to the mechanics of birth con-trot, incorporating a sub-heading on abortion. There is no section on marriage.. Eleven lines are allotted to the subject of 'responsibility', including this remark to the "boys and girls" to whom the booklet constantly addresses itself: "If you don't want to start a baby, the only (my italics) thing to do is to use a method of birth control every time You make love'.' A short section, seventeen lines, on chastity, says: "If you are the sort of boy or girl who promises all and then says no, this sort of chastity is not very fair on the other person", and cattily hints: "Others may be chaste because they have not had the opportunity to be otherwise". As a young person, I find there is much about the FPA's attitude to sex education that really concerns me. It seems they are trying to produce a totally contraceptive-minded generation, a whole generation of youngsters who will be trained to associate sex not with love and family life, but with contraception, the clinical mechanics of

People the idea of constantly 'being careful'. People don't just want to hear about the mechanics of sex, they want to know about the mental and emotional side of things as well; and unless we are able to get all this in proportion, what kind of marriages are we going to be able to make? A marriage that is based only on careful physical efficiency is not likely to be a very happy one, surely?

One final point — Mrs Parker needs one small correction on the matter of 'Population CountDown'. The quotation Mrs Mary Whitehouse used did come from a Catholic newspaper, but the same message was put in the Daily Mail (Northern edition) of June 13, 1974, under the headline 'Contraceptive 'Advice at School gates'. Joanna Nash 2 Redford Avenue, Wallington, Surrey