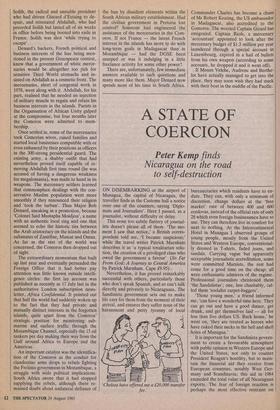 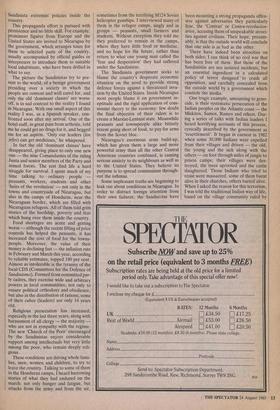 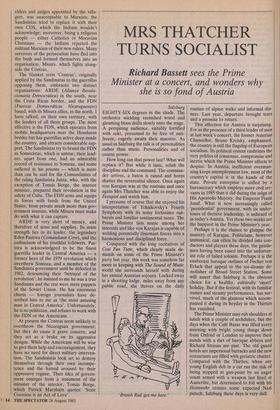 A STATE OF COERCION

Nicaragua on the road to self-destruction

ON DISEMBARKING at the airport of Managua, the capital of Nicaragua, the traveller finds in the Customs hall a notice over one of the counters, saying 'Diplo- mats and Journalists'. Here I passed, as a journalist, without difficulty or delay.

This none too subtle flattery of journal- ists doesn't please all of them. 'The mo- ment I saw that notice,' a British corres- pondent told me, 'I became suspicious;' while the travel writer Patrick Marnham describes it as 'a typical totalitarian solu- tion, the creation of a privileged class who owed the government a favour' (So Far From God: A Journey to Central America by Patrick Marnham. Cape £9.95).

Nevertheless, it has proved remarkably successful with others, particularly those who don't speak Spanish, and so can't talk directly and privately to Nicaraguans. The Sandinista government sets out to make life easy for them from the moment of their arrival, and ensures they suffer none of the harassment and petty tyranny of local 'Chelsea have o ered me a £20,000 trans er fee.' bureaucracies which residents have to en- dure. They can, with only a minimum of discretion, change dollars at the 'free market' rate of between 400 and 600 cordovas, instead of the official rate of only 28 which even foreign businessmen have to use. They can therefore live in comfort for next to nothing. At the Intercontinental Hotel in Managua I observed groups of young people, mostly from the United States and Western Europe, conventional- ly dressed in T-shirts, faded jeans, and sandals. Carrying vague but apparently acceptable journalistic accreditation, some were committed Marxists, the rest had come for a good time on the cheap; all were enthusiastic admirers of the regime. Professional journalists christened them 'the Sandalistas'; one, less charitably, cal- led them 'socialist carpet-baggers'.

'Those young men,' a friend informed me, 'can have a wonderful time here. They can go out and have a good dinner, get drunk, and get themselves laid — all for less than five dollars US. Back home,' he went on, 'they are treated as heroes who have risked their necks in the hell and shell holes of Managua.'

It is important for the Sandinista govern- ment to create a favourable atmosphere with public opinion in Western Europe and the United States, not only to counter President Reagan's hostility, but to main- tain the financial aid they receive from European countries, notably West Ger- many and Scandinavia; this aid in 1984 exceeded the total value of all Nicaraguan exports. The fear of foreign reaction is perhaps the most effective restraint on Sandinista extremist policies inside the country.

This propaganda effort is pursued with persistence and no little skill. For example, Prominent figures from Europe and the United States are invited to Nicaragua by the government, which arranges tours for them to selected parts of the country, usually accompanied by official guides or interpreters to introduce them to suitable local inhabitants, who have been drilled in what to say.

The picture the Sandinistas try to pre- sent to the world, of a benign government presiding over a society in which the people are content and well cared for, and only the old 'dominant classes' are worse off, is in sad contrast to the reality I found in Nicaragua. With one small aspect of this reality I was, as a Spanish speaker, con- fronted soon after my arrival. One of the hotel staff, in great pain from arthritis, told me he could get no drugs for it, and begged me for an aspirin. 'Only our leaders (los jefes) can get medicines,' he whispered.

In fact the old 'dominant classes' have disappeared, giving place to only one new one — the nine Comandantes of the ruling Junta and senior members of the Party and armed forces. The rest find life a hard struggle for survival. I spent much of my time talking to ordinary people — peasants, workers, students and other 'heirs of the revolution' — not only in the towns and countryside of Nicaragua, but also in the camps of Honduras, near the Nicaraguan border, which are filled with Nicaraguan refugees. All of them told grim stories of the hardship, poverty and fear which hung over them inside the country.

Food shortages are acute and getting worse — although the recent lifting of price controls has helped the peasants, it has increased the cost of food for the towns- people. Moreover, the value of their money is declining fast — the inflation rate in February and March this year, according to reliable estimates, topped 180 per cent. Almost as intolerable is the tyranny of the local CDS (Committees for the Defence of Sandinismo). Formed from committed par- ty cadres, they exercise wide and arbitrary powers in local communities, not only to ensure political orthodoxy and obedience, but also in the distribution of rations; some of their cabos (leaders) are only 14 years old.

Religious persecution has increased, especially in the last three years, along with harassment of all clergy — the majority — who are not in sympathy with the regime. The new 'Church of the Poor' encouraged by the Sandinistas enjoys considerable support among intellectuals but very little among the poor, who remain deeply reli- gious.

These conditions are driving whole fami- lies, men, women and children, to try to leave the country. Talking to some of them in the Honduran camps, I heard harrowing stories of what they had endured on the march: not only hunger and fatigue, but attacks from the army and from the air, sometimes from the terrifying M124 Soviet helicopter gunships. I interviewed many of them in the refugee camps, singly and in groups — peasants, small farmers and students. Without exception they told me they preferred to remain in the camps, where they have little food or medicine, and no hope for the future, rather than return to what one young man called the 'fear and desperation' they had suffered under the Sandinistas.

The Sandinista government seeks to blame the country's desperate economic situation on the need to provide strong defence forces against a threatened inva- sion by the United States. Inside Nicaragua most people blame it on government in- eptitude and the rigid application of com- munist theory to the economy: few doubt the final objective of their rulers is to create a Marxist-Leninist state. Meanwhile peasants and townspeople alike bitterly resent going short of food, to pay for arms from the Soviet bloc.

Nicaragua's enormous arms build-up, which has given them a large and more powerful army than all the other Central American countries combined, is causing serious anxiety to its neighbours as well as to the United States. They believe its purpose is to spread communism through- out the isthmus.

Some unpleasant truths are beginning to leak out about conditions in Nicaragua. In order to distract foreign attention from their own failures, the Sandinistas have been mounting a strong propaganda offen- sive against adversaries they particularly fear, the 'Contras' or Contra-revolucion- arios, accusing them of unspeakable atroci- ties against civilians. Their hope, presum- ably, is that the outside world will conclude that one side is as bad as the other.

There have indeed been atrocities on both sides; I can think of no civil war that has been free of them. But those of the Sandinistas are not isolated incidents, but an essential ingredient in a calculated policy of terror designed ' to crush all opposition, and carefully concealed from the outside world by a government which controls the media.

One tragic example, amounting to geno- cide, is their systematic persecution of the Indian peoples on the Atlantic coast — the Miskitos, Sumos, Ramos and others. Dur- ing a series of talks with Indian leaders I heard horrifying accounts of this process, cynically described by the government as 'resettlement'. It began in earnest in 1982 when some 30,000 Indians were expelled from their villages and driven — the old, the young and the sick along with the others — on foot through miles of jungle to prison camps; their villages were des- troyed, the trees uprooted and the cattle slaughtered. Those Indians who tried to resist were massacred, some of them burnt alive in their churches, others buried alive. When I asked the reason for this terrorism, I was told the traditional Indian way of life, based on the village community ruled by elders and judges appointed by the villa- gers, was unacceptable to Marxists; the Sandinistas tried to replace it with their own CDS, which the Indians wouldn't acknowledge; moreover, being a religious people — either Catholics or Moravian Christians — the Indians rejected the militant Marxism of their new rulers. Many survivors of the persecution have fled into the bush and formed themselves into an organisation, Misura, which fights along- side the Contras.

The blanket term 'Contras', originally applied by the Sandinistas to the guerrillas opposing them, embraces two distinct organisations: ARDE (Alianza Revolu- cionaria Democratica) in the south, near the Costa Rican border, and the FDN (Fuerzas Democrciticas Nicaraguenses) based, with its Misura allies, in the north. I have talked, on their own territory, with the leaders of all these groups. The most effective is the FDN, which operates from mobile headquarters near the Honduran border but has guerrillas active deep inside the country, and attracts considerable sup- port. The Sandinistas try to brand the FDN as Somocistas, which is untrue; their lead- ers, apart from one, had an admirable record of resistance to Somoza, and some suffered in his prisons — which is more than can be said for the Comandantes of the ruling Sandinista Junta, who, with the exception of Tomas Borge, the interior minister, prepared their revolution in the safety of Cuba. The FDN arms and equips its forces with funds from the United States, from private much more than gov- ernment sources, while Misura must make do with what it can capture.

ARDE is very short of money, and therefore of arms and supplies. Its main strength lies in its leader, the legendary Eden Pastora (Comandante Cero), and the enthusiasm of his youthful followers. Pas- tora is acknowledgecd to be the finest guerrilla leader in Central America — a former hero of the 1979 revolution which overthrew Somoza, and a member of the Sandinista government until he defected in 1982, denouncing their 'betrayal of the revolution'; he insisted to me he was a true Sandinista and the rest were mere puppets of the Soviet Union. He has enormous charm — foreign journalists have de- scribed him to me as 'the most amusing man in Central America'. Unfortunately, he is no politician, and refuses to work with the FDN or the Americans.

At present the Contras seem unlikely to overthrow the Nicaraguan government; but they do cause it grave concern, and they act as a brake on its aggressive designs. While the Americans will be wise to give them help and encouragement, they have no need for direct military interven- tion. The Sandinistas look set to destroy themselves through their own incompe- tence and the hatred aroused by their oppressive regime. Their idea of govern- ment emerges from a statement of the minister of the interior, Tomas Borge, which Patrick Marnham quotes; 'State Coercion is an Act of Love'.