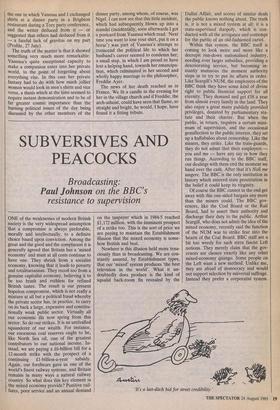 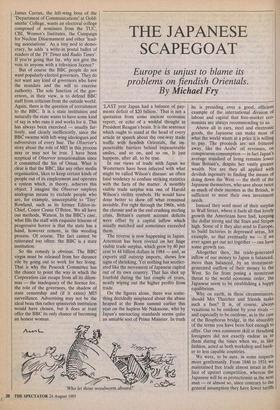 ONE of the weaknesses of modern British society is the very widespread assumption that a compromise is always preferable, morally and intellectually, to a definite choice based upon conviction. Among the great and the good and the complacent it is generally agreed that Britain has a 'mixed economy' and must at all costs continue to have one. They shrink from a socialist economy, knowing that it leads to poverty and totalitarianism. They recoil too from a genuine capitalist economy, believing it to be too brash and ruthless for refined British tastes. The result is our present hopeless compromise, which is not really a mixture at all but a political fraud whereby the private sector has, in practice, to carry on its back a large, expensive and constitu- tionally weak public sector. Virtually all our economic ills now spring from this sector. So do our strikes. It is an unrivalled squanderer of our wealth. For instance, our enormous coal reserves ought to be, like North Sea oil, one of the greatest contributors to our national income. In- stead, we are paying a £6-billion bill for a 12-month strike with the prospect of a continuing £1-billion-a-year subsidy. Again, our forebears gave us one of the world's finest railway systems, and Britain remains in many ways a natural railway country. So what does this key element in the mixed economy provide? Punitive rail- fares, poor service and an annual demand on the taxpayer which in 1984-5 reached £1,172 million, with the imminent prospect of a strike too. This is the sort of price we are paying to maintain the Establishment illusion that the mixed economy is some- how British and best.

Nowhere is this illusion held more tena- ciously than in broadcasting. We are con- stantly assured, by Establishment types, that our 'mixed' system produces 'the best television in the world'. What it un- doubtedly does produce is the kind of squalid back-room fix revealed by the Dallas Affair, and scores of similar deals the public knows nothing about. The truth is, it is not a mixed system at all: it is a state-supervised duopoly, which is con- ducted with all the arrogance and contempt for the public of an old-fashioned cartel.

Within this system, the BBC itself is coming to look more and more like a decrepit run-down nationalised industry, needing ever larger subsidies, providing a deteriorating service, but becoming in- stantly mutinous the moment authority steps in to try to put its affairs in order. Like Scargill's NUM, the employees of the BBC think they have some kind of divine right to public financial support for all eternity. They demand and get £58 a year from almost every family in the land. They also enjoy a great many publicly provided privileges, donated by parliamentary sta- tute and their charter. But when the public, in return, requires a certain mini- mum of supervision, and the occasional genuflection to the public interest, they set up a hullabaloo about censorship. Like the miners, they strike. Like the train-guards, they do not admit that their employers — you and me — have any say in how they run things. According to the BBC staff, our dealings with them end the moment we hand over the cash. After that it's Noli me tangere. The BBC is the only institution in history which entered state prostitution in the belief it could keep its virginity.

Of course the BBC cannot in the end get away with this one-sided bargain any more than the miners could. The BBC gov- ernors, like the Coal Board or the Rail Board, had to assert their authority and discharge their duty to the public. Arthur Scargill, who does not admit the idea of the mixed economy, recently said the function of the NUM was to strike fear into the hearts of the Coal Board. BBC staff are a bit too weedy for such stern fascist Left notions. They merely claim that the gov- ernors are chosen exactly like any other mixed-economy quango. Some people on the Left want a new method. Unlike me, they are afraid of democracy and would not support selection by universal suffrage. Instead they prefer a corporatist system.

'It's a last-ditch bid for street credibility.' James Curran, the left-wing boss of the 'Department of Communications' at Gold- smiths' College, wants an electoral college composed of nominees from the TUC, CBI, Women's Institutes, the Campaign for Nuclear Disarmament and other 'lead- ing associations'. As a tiny nod to demo- cracy, he adds 'a write-in postal ballot of readers of the TV Times and Radio Times'. If you're going that far, why not give the vote to anyone with a television licence?

But of course the BBC people do not want popularly-elected governors. They do not want any kind of governors who have the mandate and the will to exercise authority. The sole function of the gov- ernors, in their view, is to defend BBC staff from criticism from the outside world. Again, there is the question of recruitment to the BBC. It is a state institution and naturally the state wants to have some kind of say in who runs it and works for it. This has always been exercised — usually fur- tively, and clearly inefficiently, since the BBC swarms with left-wing ideologues and subversives of every hue. The Observer's story about the role of MIS in this process may or may not be true. I have been sceptical of Observer sensationalism since it committed the Sin of Oman. What is clear is that the BBC, like any other media organisation, likes to keep certain kinds of people out of its employment and operates a system which, in theory, achieves this object. I imagine the Observer employs analogous means to exclude people who are, for example, unacceptable to 'Tiny' Rowland, such as its former Editor-in- Chief, Conor Cruise O'Brien. We all have our methods, Watson. In the BBC's case, what fills the staff with exquisite frissons of progressive horror is that the state has a hand, however remote, in this weeding process. Of course. The fact cannot be reiterated too often: the BBC is a state institution.

So the remedy is obvious. The BBC virgin must be released from her durance vile by going out to work for her living. That is why the Peacock Committee has the chance to point the way in which the Corporation can escape from all its dilem- mas — the inadequacy of the licence fee, the role of the governors, the shadow of state censorship and (if it exists) MI5 surveillance. Advertising may not be the ideal beau this rather spinsterish institution would have chosen, but it does at least offer the BBC its only chance of becoming an honest woman.