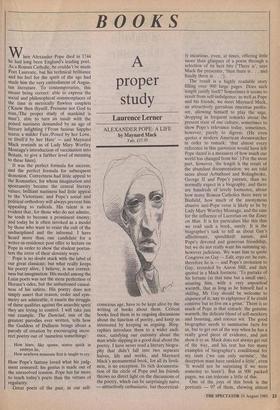 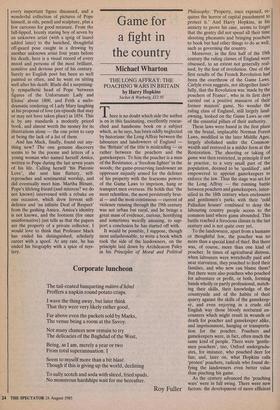 ALEXANDER POPE: A LIFE by Maynard Mack Yale, £15.95 When Alexander Pope died in 1744 he had long been England's leading poet. As a Roman Catholic, he couldn't be made Poet Laureate, but his technical brilliance and his feel for the spirit of the age had made him the very embodiment of Augus- tan literature. To contemporaries, this meant being correct: able to express the social and philosophical commonplaces of the time in metrically flawless couplets (`Know then thyself, Presume not God to scan,fThe proper study of mankind is man), able to turn an insult with the poised nastiness demanded by an age of literary infighting (Prom furious Sappho scarce a-milder Fate,/Poxed by her Love, or libell'd by her Hate' — and Maynard Mack reminds us of Lady Mary Wortley Montagu's introduction of vaccination into Britain, to give a further level of meaning to these lines).

It was the perfect formula for success; and the perfect formula for subsequent demotion. Correctness had little appeal to the Romantics, for whom imagination and spontaneity became the central literary values; brilliant nastiness had little appeal to the Victorians; and Pope's social and political orthodoxy will always prevent him appealing to radicals. His talent is so evident that, for those who do not admire, he tends to become a prominent enemy; and today he is often invoked as a model by those who want to resist the cult of the undisciplined and the informal. I have heard more than one candidate for a writer-in-residence post offer to lecture on Pope in order to show the student poetas- ters the error of their slovenly ways.

Pope is no doubt stuck with the label of our great classicist; but what really keeps his poetry alive, I believe, is not correct- ness but imagination. His model among the Latin poets was not the stern perfection of Horace's odes, but the unbuttoned casual- ness of his satires. His poetry does not simply assert that reason, order and sym- metry are admirable, it enacts the struggle of these qualities against the anarchic spirit' they are trying to control. I will take just one example. The Dunciad, one of the greatest parodies ever written, tells how the Goddess of Dullness brings about a parody of creation by encouraging incor- rect poetry out of `nameless somethings':

How hints, like spawn, scarce quick in embryo lie, How newborn nonsense first is taught to cry. ,

How Pope's fantasy loved what his judg- ment censured; his genius is made out of the unresolved tension. Pope has far more to teach today's poets than the virtues of regularity.

Great poets of the past, in our self- conscious age, have to be kept alive by the writing of books about them. Critical books feed them in to ongoing discussions about the function of poetry, and keep us interested by keeping us arguing. Biog- raphies introduce them to a wider audi- ence, satisfying our curiosity about the man while slipping in a good deal about the poetry. I have never read a literary biogra- phy that didn't fall into two separate halves, life and works, and Maynard Mack's monumental book, for all its liveli- ness, is no exception. Its rich documenta- tion of the circle of Pope and his friends throws no direct light on the discussions of the poetry, which can be surprisingly naive — attractively enthusiastic, but theoretical- ly incurious, even, at times, offering little more than glimpses of a poem through a selection of its best bits (`There is', says Mack the presenter, `then there is . . and finally there is . . .').

The result is a highly readable story filling over 900 large pages. Does such length justify itself? Sometimes it seems to result from self-indulgence: as well as Pope and his friends, we meet Maynard Mack, an attractively garrulous emeritus profes- sor, allowing himself to play the sage, dropping in frequent remarks about the present state of our culture, sometimes to show Pope's relevance today, sometimes, however, purely to digress. (He even quotes a modern American doomwatcher in order to remark: 'that almost every reference in this quotation would have left Pope dazed is a measures of how much our world has changed from his'.) For the most part, however, the length is the result of the abundant documentation: we are told more about Arbuthnot and Bolingbroke, George II and Pope's parents, than we normally expect in a biography, and there are hundreds of lovely footnotes, about how many Roman Catholics there were in Binfield, how much of the anonymous abusive anti-Pope verse is likely to be by Lady Mary Wortley Montagu, and the case for the influence of Lucretius on the Essay on Man. It is for particulars like this that we read such a book, surely. It is the biographer's task to tell us about Gay's affectionate, spendthrift nature, and Pope's devoted and generous friendship, but we do not really want his summing up, however judicious. We want him to quote Congreve on Gay — Edit, ergo est: he eats, therefore he is — and Pope's invitation to Gay, recorded by Aaron Hill, and duly quoted in a Mack footnote, `To partake of his fortune (at that time but a small one), assuring him, with a very unpoetical warmth, that as long as he himself had a shilling, Mr Gay should be welcome to sixpence of it; nay to eightpence if he could contrive but to live on a groat.' There is so much of Pope in that remark: the genuine warmth, the delicate blend of self-mockery and boasting, and rococo wit. The good biographer needs to summarise facts for us, but to get out of the way when he has a really good piece of evidence, and just show it to us. Mack does not always get out of the way, and his text has too many examples of biographer's conditional for my taste ('we can only surmise', the deception must have rankled a little', even 'It would not be surprising if we were someday to learn'). But in 900 packed pages, we can tolerate a little of this.

One of the joys of this book is the portraits — 97 of them, showing almost every important figure discussed, and a wonderful collection of pictures of Pope himself, in oils, pencil and sculpture, plus a few cartoons for good measure. From the full-lipped, keenly staring boy of seven by an unknown artist (with a sprig of laurel added later) to the hunched, thoughtful off-guard pose caught in a drawing by another unknown artist four years before his death, here is a visual record of every mood and persona of the most brilliant, sensitive and devious poet of his century. Surely no English poet has been so well painted so often, and he went on sitting well after his death: Blade did a surprising- ly sympathetic head of Pope 'between figures of the Unfortunate Lady and Eloisa' about 1800, and Frith a melo- dramatic rendering of Lady Mary laughing at his proposal of love (an episode that may or may not have taken place) in 1854. This is by any standards a modestly priced book, and almost worth the money for its illustrations alone — the one point to carp at being the lack of a list of them.

And has Mack, finally, found out any- thing new? The one genuine discovery seems to be the poems and letters of a young woman who named herself Amica, written to Pope during the last seven years of his life. Calling herself 'his Platonic Love', she sent him flattery, self- reproaches and sentimental worship, and did eventually meet him. Martha Blount, Pope's lifelong friend (and mistress? we do not known) intervened with a rebuke on one occasion, which drew fervent self- defence and 'an infinite Deal of Respect' from the gushing Amica. Amica's identity is not known, and the footnote (for once uninformative) just tells us that the papers are the property of a private collector. I would love to think that Professor Mack has ended his distinguished, scholarly career with a spoof. At any rate, he has ended his biography with a spice of mys- tery.