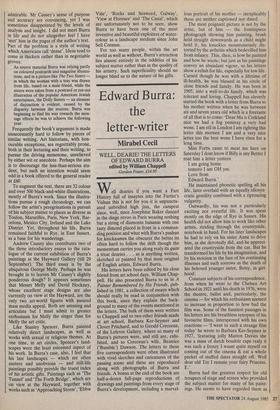 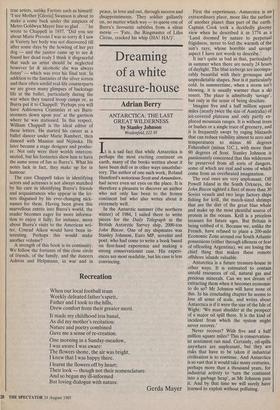 Well dearies if you want a Fart History full of insaytes into the Fartist's Vishun this is not for you it is unpunctu- ated unbridled high jinx, the campest since, well, since Josephine Baker danced in the dinge revoo in Paris wearing nothing but a string of diamonte bananas with one tasty dimond placed in front in a comman- ding position and what with Burra's pashun for knicknames the obscurer the better its often hard to follow the drift though the momentum carries you along realy its quite a treat dearies . . . as is anything written, sketched or painted by that most original of English artists, Edward Burra. His letters have been edited by his close friend from art school days, William Chap- pell. He also presented Burra to us in A Painter Remembered by His Friends, pub- lished in 1981, a collection of essays which should really be read in conjunction with this book, since they explain the back- ground to many of the events mentioned in the letters. The bulk of them were written to Chappell and to two other friends made at art school, Barbara Ker-Seymer and Clover Pritchard, and to Gerald Corcoran, of the Lefevre Gallery, where so many of Burra's pictures were, and still are, exhi- bited, and to Corcoran's wife, Beatrice (Tumble') Dawson. The letters to these five correspondents were often illustrated with vivid sketches and caricatures of the passing scene and these are reproduced along with photographs of Burra and friends. A bonus at the end of the book are half-a-dozen full-page reproductions of drawings and paintings from every stage of Burra's development, including a marvel- lous portrait of his mother — inexplicably these are neither captioned nor dated.

The most poignant picture is not by the artist, but of him — the frontispiece photograph showing him painting, brush held straight downwards as a child might hold it, his knuckles mountainously dis- torted by the arthritis which bedevilled him from infancy. This, then, is how he painted and how he wrote; but just as his paintings convey an abundant vigour, so his letters show a relish for life, especially for low life. Cursed though he was with a lifetime of ill-health, he was blessed in his circle of close friends and family. He was born in 1905, into a well-to-do family, which was tolerant and loving. Chappell has cleverly started the book with a letter from Burra to his mother written when he was between six and seven years old which is a foretaste of all that is to come: 'Dear Ma is Cotkland nice we had a fog yesteray a very bad wone. I am stil in London I am righring this letter this momen I am and a very nice letter too the best wone I have riten for a long time.

Miss Forbs came to meat me here on Saterday I dont know if Billy is any Better I roat him a letter yestern I am going home tomoro I am OH yes.

He maintained phonetic spelling all his life, later overlaid with an equally idiosyn- cratic gentility combined with a riproaring vulgarity.

Outwardly, his was not a particularly exciting nor eventful life. It was spent mostly on the edge of Rye in Sussex. His health did not allow him to work like other artists, striding through the countryside, notebook in hand. For his later landscapes he had to rely on his sister Anne to drive him, as she devotedly did, and he appreci- ated the countryside from the car. But he transformed his life by his imagination, and by his stoicism in the face of his continuing illnesses and such sorrows as the death of his beloved younger sister, Betsy, in girl- hood.

Constant subjects of his correspondence, from when he went to the Chelsea Art School in 1921 until his death in 1976, were the theatre, ballet and, particularly, the cinema — for which his enthusiasm seemed to increase in proportion to how bad the film was. Some of the funniest passages in his letters are his breathless synopses of his favourite films, interspersed with his own reactions — 'I went to such a strange film today' he wrote to Barbara Ker-Seymer in 1927, 'featuring jolly Marion Davies she was a mass of dutch boudoir caps realy it was such a frenzy I wasnt quite myself on coming out of the cinema & eat a whole packet of stuffed dates straight off. Well dear old Tot I remain your fairy Princess. E.'

Burra had the greatest respect for old troupers of stage and screen who provided the subject matter for many of his paint- ings. He seems to have regarded them as true artists, unlike Fartists such as himself: 'I see Mother [Gloria] Swanson is about to make a come back under the auspices of Metro Goldwyn Mayer Ime so glad. . .' he wrote to Chappell in 1937. 'Did you see about Marie Prevost I was so sorry & I saw in Variety her body was not discovered till after some days by the howling of her pet dog — and the janitor came up to see & found her dead realy I think it disgraceful that such an artist should be neglected however fat & alcoholic she was always funny' — which was ever his final test. In addition to the fantasies of the silver screen and their often sordid real-life counterparts we are given many glimpses of backstage life at the ballet, particularly during the war when they toured troop camps or, as Burra put it to Chappell: 'Perhaps you will have Ashtonova Crummles et ses Barn- stormers down upon you' at the garrison where he was stationed. In this respect, William Chappell is the ideal editor of these letters. He started his career as a ballet dancer under Marie Rambert, then danced with Massine and Nijinska. He later became a stage designer and produc- er. Not only were their worlds intercon- nected, but his footnotes show him to have the same sense of fun as Burra's. What his notes lack in fact, they make up for in humour.

The care Chappell takes in identifying actors and actresses is not always matched by his care in identifying Burra's friends and acquaintances who appear in the let- ters disguised by his ever-changing nick- names for them. Having been given this marvellous entrée into Burra's world, the reader becomes eager for more informa- tion to enjoy it fully; for instance, more about Burra's visits to the American wri- ter, Conrad Aiken would have been in- teresting. Perhaps this would make another volume?

A strength of this book is its continuity. We follow the fortunes of this close circle of friends, of the family, and the dancers Ashton and Helpmann, in war and in peace, in love and out, through success and disappointments. They soldier gallantly on, no matter which way — to quote one of Burra's favourite subtitles from a silent movie — 'Fate, the Ringmaster of Lifes Circus, cracked his whip (HA! HA!)'.