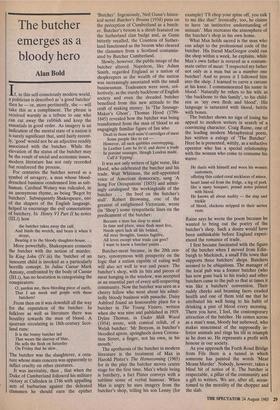 The butcher emerges as a bloody hero

For centuries the butcher served as a symbol of savagery, a man whose blood- drenched business condemned him as sub- human. Cardinal Wolsey was ridiculed, in an anonymous rhyme, as being 'Begot by butchers'. Subsequently Shakespeare, one of the shapers of the English language, helped to encourage the evil connotations of butchery. In Henry VI Part II he notes (III.i) how the butcher takes away the calf,

And binds the wretch, and beats it when it strays, Bearing it to the bloody slaughter-house. . .

More powerfully, Shakespeare connects the butcher with the notion of murder. In King John (IV.iii) the 'butcher of an innocent child is invoked as a particularly horrific concept. In Julius Caesar Mark Antony, confronted by the body of Caesar (1H.i), has no hesitation in categorising the conspirators: 0, pardon me, thou bleeding piece of earth, That I am meek and gentle with these butchers!

From then on it was downhill all the way for the reputation of the butcher. In folklore as well as literature there was hostility towards the man of blood. A quatrain circulating in 18th-century Scot- land runs: It is the bonny butcher lad

That wears the sleeves of blue, He sells the flesh on Saturday On Friday that he slew.

The butcher was the slaughterer, a crea- ture whose main concern was apparently to inflict cruelty on other creatures.

It was inevitable, then , that when the Duke of Cumberland followed his military victory at Culloden in 1746 with appalling acts of barbarism against the defeated clansmen he should earn the epithet 'Butcher'. Ingeniously, Neil Gunn's histor- ical novel Butcher's Broom (1934) puns on the perception of Cumberland as a butch- er. Butcher's broom is a shrub featured on the Sutherland clan badge and, as Gunn bitterly recalled, the Countess of Suther- land functioned as the broom who cleared the clansmen from a Scotland contamin- ated by Butcher Cumberland. Slowly, however, the public image of the butcher altered. Napoleon, like Adam Smith, regarded England as a nation of shopkeepers as the wealth of the nation was increasingly associated with the small businessman. Tradesmen were seen, col- lectively, as the sturdy backbone of English society and even the dreaded butcher benefited from this new attitude to the craft of making money. In 'The Sausage- Maker's Ghost', Thomas Hood (1799- 1845) revealed how the butcher was being transformed from the man of blood to an engagingly familiar figure of fun who

Dealt in those well-minc'd cartridges of meat Some people like to eat — However, all such quibbles overstepping, In Leather Lane he liv'd; and drove a trade In porcine sausages, though London made, Ca11'd 'Epping'.

It was not only writers of light verse, like Hood, who celebrated the butcher and his trade. Walt Whitman, the self-appointed voice of American democracy, sang 'A Song For Occupations' (1855) and admir- ingly catalogued 'the workingknife of the butcher . . . the beef on the butcher's stall'. Robert Browning, one of the greatest of enlightened Victorians, wrote (in 'Shop') some sympathetic lines on the predicament of the butcher:

Because a man has shop to mind In time and place, since flesh must live, Needs spirit lack all life behind, All stray thoughts, fancies fugitive, All loves except what trade can give?

Butcher-meat became, in the 20th cen- tury, synonymous with prosperity on the logic that a nation capable of eating well will also act well in war and peace. The butcher's shop, with its bits and pieces of meat hanging in the window, was accepted as an essential part of every self-respecting community. Now the butcher was seen as a cheery fellow who went about his admit- tedly bloody business with panache. Daisy Ashford found an honourable place for a butcher in The Young Visiters, written when she was nine and published in 1919. Dylan Thomas, in Under Milk Wood (1954) wrote, with comical relish, of a Welsh butcher: 'Mr Benyon, in butcher's bloodied apron, springheels down Corona- tion Street, a finger, not his own, in his mouth.'

The apotheosis of the butcher in modern literature is the treatment of Max in Harold Pinter's The Homecoming (1965) for in the play the butcher moves centre stage for the first time. Max's whole being is butchery, a fact Pinter conveys with a sublime sense of verbal humour. When Max is angry he uses imagery from the butcher's shop, telling his son Lenny (for example) 'I'll chop your spine off, you talk to me like that!' Ironically, too, he claims to have 'an instinctive understanding of animals'. Max recreates the atmosphere of the butcher's shop in his own home.

What Max holds sacred is the man who can adapt to the professional code of the butcher. His friend MacGregor could run the shop within a week, he explains, while Max's own father is revered as a consum- mate cutter of meat: 'I respected my father not only as a man but as a number one butcher! And to prove it I followed him into the shop. I learned to carve a carcass at his knee. I commemorated his name in blood.' Naturally he refers to his wife as 'the backbone to this family', to his child- ren as 'my own flesh and blood'. His language is saturated with blood,- brittle with bones.

The butcher shows no sign of losing his appeal to modern writers in search of a convincing character. Craig Raine, one of the leading modern Metaphysical poets, has written a eulogy of 'The Butcher'. Here he is presented, wittily, as a seductive operator who has a special relationship with the women who come to consume his wares:

He duels with himself and woos his women customers, offering thin coiled coral necklaces of mince, heart lame-ed from the fridge, a leg of pork like a nasty bouquet, pound notes printed with blood.

He knows all about nudity — the slap and trickle of blood, chickens stripped to their aertex vests.

Raine says he wrote the poem because he wanted to bring out the poetry of the butcher's shop. Such a desire would have been unthinkable before England experi- enced the romance of trade.

I first became fascinated with the figure of the butcher when I moved from Edin- burgh to Markinch, a small Fife town that supports three butchers' shops. Butchers seemed to be ubiquitous. The manager of the local pub was a former butcher (who has now gone back to his trade) and other butchers came to the pub so that at times it was like a butchers' convention. Their ruddy cheeks and beaming faces exuded health and one of them told me that he attributed his well being to his habit of drinking a pint of blood every morning. There you have, I feel, the contemporary attraction of the butcher. He comes across as a man's man, bloody but unbowed, who makes mincemeat of the supposedly in- ferior animals and rings his till in triumph as he does so. He represents a profit with honour in our society.

As you approach the Forth Road Bridge from Fife there is a tunnel in which someone has painted the words 'Meat Means Murder'. Nobody, however, takes a blind bit of notice of it. The butcher is respectable, a pillar of the community and a gift to writers. We are, after all, accus- tomed to the morality of the chopper and the slab.