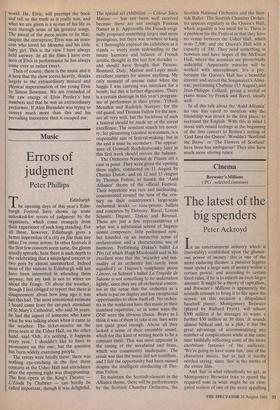 TEdinburgh he opening days of this year's Edin- burgh Festival have shown up some unlooked-for errors of judgment by the organisers, which come strangely from their experience of such long standing. For all these, however, Edinburgh gives a better impression of a city en fete than any other I've come across. In other festivals if the first few concerts seem tame, the gloom usually spreads; here there is such depth to the celebrating that a misjudged concert or two goes by almost unremarked. Indeed most of the visitors to Edinburgh will not have been interested in attending them anyway; but my task is not to witter on about the Fringe. Or about the weather; though I feel obliged to report that there is disagreement about how long ago it was last this bad. The most sensational estimate I heard came from the car-park attendant of St Mary's Cathedral, who said 34 years: he had the aspect of someone who knew what he was talking about when it came to the weather. The ticket-minder on the press seats at the Usher Hall, on the other hand, said `Och, it's nothing, it happens every year.' I shouldn't like to have to pronounce on this one; but the question has been widely exercising people.

The errors were briefly these: there was nothing eye-catching in the first three concerts at the Usher Hall and attendance after the opening night was disappointing. The first opera at the King's Theatre — L'Etoile by Chabrier — can hardly be called important, though it was delightful. The special art exhibition — Colour Since Matisse — has not been well received because there are not enough Famous Names in it. Apparently the French origi- nally proposed something larger and more prestigious, but there was nowhere to hang it. I thoroughly enjoyed the exhibition as it stands — every room redounding to the innate harmony and balance of French artistic thought in the last few decades — and should have thought that Picasso, Bonnard, Dufy, Matisse and Leger made excellent starters for almost anything. My only moment of unease came when the haggis I was carrying was mistaken for a bomb; but this is further digression. There is a certain shortage in this year's program- me of performers in their prime. Yehudi Menuhin and Rudolph Nureyev, for the old guard, and Thomas Fulton for the new, are all very well, but the backbone of such a festival should be made up of the surest excellence. The constant search for novel- ty, for pioneering talented newcomers, is a respectable aim of festival-making, but in the end it must be secondary. The appear- ance of Gennadi Rozhdestvensky later in this first week should restore the balance.

The Orchestre National de France are a case in point. They were given the opening three nights, conducted on 11 August by Charles Dutoit, and on 12 and 13 August by Thomas Fulton, to launch the 'Auld Alliance' theme of the official Festival. Their repertoire was rare and fascinating, concentrated around the turn of the cen- tury on their countrymen's large-scale orchestral works — tone-poems, ballets and concertos by Debussy, Ravel, Lorent Schmitt, Duparc, Dukas and Roussel. These are just a few representatives of what was a substantial school of Impres- sionist composers, little performed now, but founded on an instinctive sense of orchestration and a characteristic use of harmony. Performing Dukas's ballet La Pen i (of which Hugh Macdonald said in his excellent note that the 'wizardry and sen- suality of its orchestra has rarely been equalled') or Duparc's symphonic poem Lenore, or Schmitt's ballet La Tragedie de Salome is not something to be undertaken lightly, since they are all orchestral concer- tos in the sense that the orchestra as a whole is put on display and has exceptional opportunities to show itself off. No orches- tra in the world can have this music in their standard repertoire, so in some ways the ONF were the obvious choice. Brave as I think it was of them to take it on, they were not quite good enough. Above all they

lacked a sense of their ensemble sound, which for this kind of writing needs to be a constant thrill. This was most apparent in the tuning of the woodwind and brass, which was consistently inadequate. The result was that the music did not scintillate, and I felt the opportunity had been missed despite the intelligent conducting of Tho- mas Fulton.

To maintain the Scottish element in the Alliance theme, there will be performances by the Scottish 'Chamber Orchestra, the Scottish National Orchestra and the Scot- tish Ballet. The Scottish Chamber Orches- tra appears regularly in the Queen's Hall, which arguably is too small for it. There is a problem for the Festival in that they have no venue between the Usher Hall, which seats 2,500, and the Queen's Hall with a capacity of 700. They need something in between and have hopes of the McEwan Hall, where the acoustics are proverbially unhelpful. Apparently miracles will be worked with microphones. It's a pity, because the Queen's Hall has a beautiful interior and served the Songmaker's Alma- nac, performing Chabrier (13 August),and Jean-Philippe Collard, giving a recital of piano music by Franck and Ravel, ideally well.

In all this talk about the 'Auld Alliance' no one has cared to mention why the friendship was struck in the first place: to surround the English. With this in mind I stood with mixed feelings at the beginning of the first concert to Britten's setting of 'God Save the Queen'. Wouldn't 'Scotland the Brave' or 'The Flowers of Scotland' have been less ambiguous? They also have much more stirring tunes.