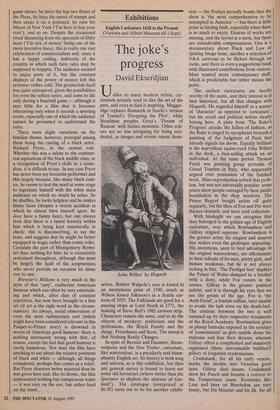 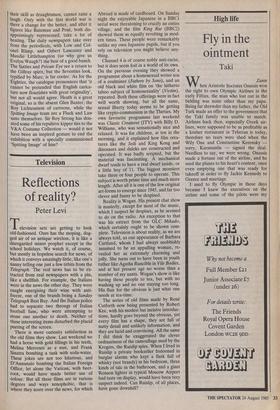 David Ekserdjian nlike so many modern artists, car- toonists actually tend to like the art of the past, and even to find it inspiring. Mugger- idge replaces Bismarck in Searle's version of Tenniel's 'Dropping the Pilot', while Steadman peoples Goya's 'Dream of Reason' with Sixties monsters. Other ech- oes are no less intriguing for being acci- dental, as images and events repeat them- 'John Wilkes' by Hogarth selves. Robert Walpole's arse is kissed in an anonymous print of 1740, much as Wilson kissed Johnson's in a Scarfe car- toon of 1955. The Falklands are good for a passing swipe at Lord North in 1771, the making of Steve Bell's 1982 cartoon strip. Characters remain the same, and so do the objects of mockery: politicians and the professions, the Royal Family and the clergy, Frenchmen and Scots. The moral is that Nothing Really Changes.

In spite of Bernini and Daumier, Struw- welpeter and the New Yorker, caricature, like watercolour, is a peculiarly and trium- phantly English art. Its history is both long and uneven, as is this exhibition, but then any general survey is bound to leave out some old favourites (where better than the Spectator to deplore the absence of Gar- land?). The catalogue (overpriced at £6.95) turns out to be for another exhibi- tion — the Preface proudly boasts that the show is 'the most comprehensive to be attempted in America' — but there is little point in finding fault, especially when there is so much to enjoy. Dozens of works are missing, and the layout is a mess, but there are considerable compensations. One is a documentary about Fluck and Law of Spitting Image fame, another a selection of V&A cartoons to be fficked through on racks, and there is even a suggestions book with illustrated contributions from visitors. Most wanted more contemporary stuff, which is predictable but rather misses the point.

The earliest caricatures are hardly worthy of the name, and their interest is at best historical, but all that changes with Hogarth. He regarded himself as a master of 'character' as opposed to 'caricature', but his social and political satires clearly belong here. A plate from 'The Rake's Progress' attacks the follies of fashion, as the Rake is ringed by sycophants beneath a painting of the Judgment of Paris that already signals his doom. Equally brilliant is the marvellous squint-eyed John Wilkes in the dock, a best-selling attack on an individual. At the same period Thomas Patch was painting group portraits of Grand Tourists in Italy, who apparently argued over possession of the finished work. Mass-reproduction solved that prob- lem, but was not universally popular: some prints show people outraged by their public humiliation in the shop windows. The Prince Regent bought artists off quite regularly, but the likes of Fox and Pitt were thicker-skinned, and were avid collectors.

With hindsight we can recognise that they belonged to the golden age of English caricature, over which Rowlandson and Gillray reigned supreme_ Rowlandson is the greater artist: his elegant and sinuous line makes even the grotesque appealing. His inventions, seen to best advantage in the original watercolours, are affectionate in their ridicule of fat men, pretty girls, and human weakness, but he is not always lacking in bite. 'The Prodigal Son' displays the Prince of Wales slumped in a brothel with a doxy, while Fox vomits in the corner. Gillray is the greater political satirist, and it is through his eyes that we see the greats of the age. Fox is 'the Arch-Fiend', a brutish ruffian, later unable to evade the lash even on his death-bed. The contrast between the two is well summed up by their respective treatments of the Royal Academy. Rowlandson gives us plump buttocks exposed to the scrutiny of 'connoisseurs' as girls tumble down the staircase and lose their dresses, whereas Gillray offers a complicated and massively captioned (those interminable bubbles!) pillory of forgotten academicians.

Cruikshank, for all his early venom, marks the decline into Victorian good taste. Gillray died insane, Cruikshank drew for Punch and became a convert to the Temperance cause. Eccentrics like Lear and later on Beerbohm are very funny, but Du Maurier and his ilk, for all their skill as draughtsmen, cannot raise a laugh. Only with the first world war is there a change for the better, and after it figures like Bateman and Pont, both dis- appointingly represented, take a lot of beating. The daily newspapers take over from the periodicals, with Low and Col- onel Blimp, and Osbert Lancaster and Maudie Littlehampton (so why give us Evelyn Waugh?) the best of a good bunch. The Sixties and Private Eye see a return to the Gillray spirit, but the Seventies look, typified by Marc, is far cooler. As for the Eighties, the catalogue pronounces that 'it cannot be pretended that English carica- ture now flourishes with great originality', but not all would agree. Heath is a great original, so is the absent Glen Baxter, the Roy Lichtenstein of cartoons, while the Spitting Image team are a Pluck and Law unto themselves. Sir Roy Strong has don- ated some of his repulsive kipper ties to the V&A Costume Collection — would it not have been an inspired gesture to end the exhibition with a specially commissioned 'Spitting Image' of him?