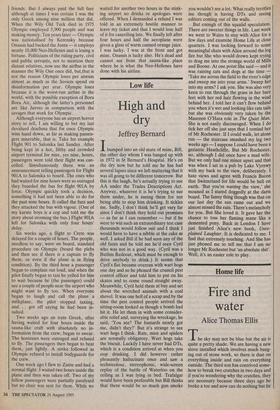 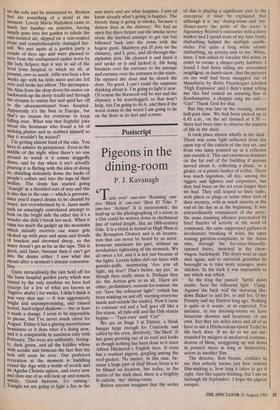 The sky may not be blue but the air is quite a pretty shade. We are having a new stove installed which involves much bang- ing out of stone work, so there is dust on everything inside and rain on everything outside. The third son has contrived some- how to break two crutches in two days and if you're wondering why the crutches, they are necessary because three days ago he broke a toe and now can do nothing but lie on the sofa and be ministered to. Broken feet are something of a motif at the moment. Lovely Mavis Nicholson came to lunch last Sunday on crutches, having simply gone into her garden to inhale the rain-scented air, slipped on a rain-soaked stone and comprehensively damaged her- self. We met again at a garden party a couple of days ago and were pleased to note from the emblazoned sashes worn by the lady helpers that it was in aid of the local bone hospital to which we all, at present, owe so much. Alfie was here a few weeks ago with his little niece and she fell over and broke her elbow. The incompara- ble Alan from the shop drove his motor car backwards up the stony tracks and through the streams to rescue her and sped her off to the aforementioned bone hospital. Apparently it's the best in Europe, but that's no reason for everyone to keep falling over. What was that frightful joke about the Scotsman who found a bit of Sticking plaster and so stabbed himself so that it wouldn't be wasted?

I'm getting almost fond of the rain. You have to admire its persistence. Even in the middle of the night when there's no one around to watch it it comes doggedly down, and by day when it isn't actually Pouring it is flirting with the idea of doing SO, drizzling delicately down the backs of People's collars and into the tops of their Wellies, The drain has started going `Aaargh' in a throttled sort of way and this is also due to the rain — which is perverse, smce you'd expect drains to be cleared by water, not overwhelmed by it. Janet made such an amazingly convoluted attempt to look on the bright side the other day it's a wonder she didn't break her neck. When it rains too much the gadget up the mountain Which initially receives our water gets Choked up with peat and moss and fronds of bracken and drowned sheep, so the water doesn't get as far as the taps. This is good, said Janet, because then it can't get into the drains either. I saw what she meant after a moment's intense concentra- tion.

Quite miraculously the rain held off for the bone hospital garden party which was visited by the only sunshine we have had (except for a few of what are known as 'fugitive shafts') for weeks. I didn't think it was very nice sun — it was aggressively bright and uncompromising, and caused horrid, hard-edged shadows — but at least it made a change. I seem to be impossible to please, but I've never much cared for August. Either it has a glaring meretricious brassiness or it does what it's doing now, and it is comparable in nastiness only with February. The trees are uniformly, boring- IY, dark green, and all the kiddies whine With accidie and bemoan the fact that the hols will soon be over. Our preferred recreation at the moment is huddling round the Aga with a bottle of scotch and an Agatha Christie apiece, and every now and then one of us will look up and remark Wittily, `Good heavens, it's raining.' Tonight we are going to light a fire in the new stove and see what happens. I sort of know already what's going to happen. The bloody thing is going to smoke, because a demon lives in the chimney. We had an open fire there before and the smoke never made the feeblest attempt to get out but billowed back into the room with the hugest gusts. Maldwyn put H pots on the chimney, and L pots, and all-through-the- alphabet pots. He cleaned it and lined it and spoke to it and kicked it. He hung blankets over the entrance to the passage and curtains over the entrance to the stairs. He opened the door and he closed the door. No good. I can't stand the suspense thinking about it. I'm going to light it now. Of course the firewood will be wet and the chimney a bit waterlogged, so that won't help, but I'm going to do it, and then if the worst comes to the worst I am going to lie on the floor at its feet and scream.