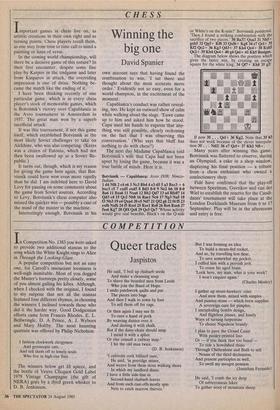 Winning the big one

Important games in chess live on, as artistic creations in their own right and as turning points. Chess players recall them, as one may from time to time call to mind a painting or lines of verse.

In the coming world championship, will there be a decisive game of this nature? In their first encounter, despite some fine play by Karpov in the endgame and later from Kasparov in attack, the overriding impression is one of dross. Nothing be- came the match like the ending of it.

I have been thinking recently of one particular game, which is in every chess player's stock of memorable games, which is Botvinnik's victory over Capablanca in the Avro tournament in Amsterdam in 1937. The great man won by a superb sacrificial attack.

It was this tournament, if not this game itself, which established Botvinnik as the most likely Soviet challenger to take on Alekhine, who was also competing. (Keres was a citizen of Estonia, which had not then been swallowed up as a Soviet Re- public.) It turns out, though, which is my reason for giving the game here again, that Bot- vinnik could have won even more rapidly than he did. I am indebted here to David Levy for passing on some comments about the game from Soviet sources. According to Levy, Botvinnik's chess computer also missed the quicker win — possibly a case of the mind of the master in the machine.

Interestingly enough, Botvinnik in his own account says that having found the combination to win, 'I sat there and thought about the most accurate move order.' Evidently not so easy, even for a world champion, in the excitement of the moment.

Capablanca's conduct was rather reveal- ing, too. He kept an outward show of calm while walking about the stage. 'Euwe came up to him and asked him how he stood. Capa used his hands to express that any- thing was still possible, clearly reckoning on the fact that I was observing this conversation.' (Who says that bluff has nothing to do with chess?) The next day Madame Capablanca told Botvinnik's wife that Capa had not been upset by losing the game, because it was a true battle of minds. Here it is.

The diagram below shows the position which gives the faster win, by creating an escape square for the white king. 34 Qf7+ Kh8 35 g3!

Many years after winning this game, Botvinnik was flattered to observe, during an Olympiad, a cake in a shop window, displaying his final position — a tribute from a chess enthusiast who owned a confectionery shop.

Fide have confirmed that the play-off between Speelman, Gavrikov and van der Wiel to establish the reserve for the Candi- dates' tournament will take place at the London Docklands Museum from 6 to 17 September. Play will be in the afternoons and entry is free.