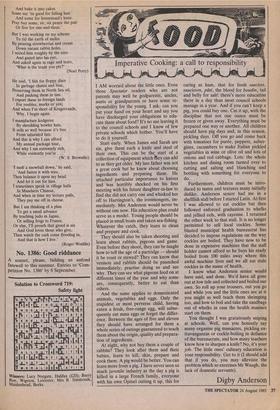 Imperative Cooking: a call to responsibility

3.4 • I inINUALimPLOLOAL".,„",impLi' " I AM worried about the little ones. Even those Spectator readers who are not parents may well be godparents, uncles, aunts or grandparents or have some re- sponsibility for the young. I ask: can you put your hand on your heart and say you have discharged your obligations to edu- cate them about food? It's no use leaving it to the council schools and I know of few private schools which bother. You'll have to do it yourself. Start early. When James and Sarah are six, give them each a knife and steel of their own. This can be the start of a collection of equipment which ?hey can add to as they get older. My late father was not a great cook but he knew about choosing ingredients and preparing them. He attached particular importance to knives and was horribly shocked on his first meeting with his future daughter-in-law to find she did not carry one and whisked her off to Harrington's, the ironmongers, im- mediately. Mrs Anderson would never be without one now. His education plan could serve as a model. Young people should be placed in small boats and taken sea-fishing. Whatever the catch, they learn to clean and prepare and cook.

They should also be taken shooting and learn about rabbits, pigeons and game. Even before they shoot, they can be taught how to tell the age of a partridge — should it be roast or stewed? They can know that venison and rabbits should be paunched immediately; practise doing so and see why. They can see what pigeons feed on at different times of the year and why some are, consequently, better to eat than others.

And the same applies to domesticated animals, vegetables and eggs. Only the stupidest or most perverse child, having eaten a fresh, free-range egg, will subse- quently eat mass eggs or forget the differ- ence. Between the ages of five and eleven they should have arranged for them a whole series of outings guaranteed to teach them about the origin, quality and prepara- tion of ingredients.

At eight, why not buy them a couple of rabbits? They look after them and their babies, learn to kill, skin, prepare and cook them. A pig would be better. You can learn more from a pig. I have never seen so much juvenile industry as the day a pig is killed in a large French family, everyone with his own Opinel cutting it up, this for curing as ham, that for fresh saucisse, saucisson, pâté, the blood for boudin, tail and belly for sale: there's more education there in a day than most council schools manage in a year. And if you can't keep a pig, you could buy one. Cut it up, with the discipline that not one ounce must be frozen or given away. Everything must be prepared one way or another. All children should have pig days and, in this season, pickling days. Off you go and come back with tomatoes for purée, peppers, auber- gines, cucumbers to make Italian pickled vegetables in wine or olive oil and lots of onions and red cabbage. Lots: the whole kitchen and dining room turned over to cutting and salting and blanching and bottling with something for everyone to do.

Furthermore, children must be intro- duced to tastes and textures many initially dislike. Anderson senior had me in a shellfish stall before I started Latin. At first I was allowed to eat cockles but then followed enforced graduation to whelks and jellied eels, with cayenne. I returned the other week to that stall. It is no longer permitted to sell local cockles. Some blasted municipal health bureaucrat has decided to impose regulations on the way cockles are boiled. They have now to be done in expensive machines that the stall holder cannot afford so he buys his ready boiled from 100 miles away where this awful machine lives and we all eat stale cockles in the name of health.

T know what Anderson senior would have said, and done. We'd have all gone out at low tide and collected and boiled our own. So roll up your trousers, out you go and while you and the little ones are at it you might as well teach them shrimping too, and how to boil and take the sandbags out of whelks in case the health maniacs start on them.

You thought I was gratuitously sniping at schools. Well, can you honestly say many organise pig massacres, pickling ex- travanganzas or cockle-boiling in defiance of the bureaucrats, and how many teachers know how to sharpen a knife? No, it's your job. The little ones' culinary education is your responsibility. Get to it (I should add that if you do, you may alleviate the problem which so exercises Mr Waugh, the lack of domestic servants).