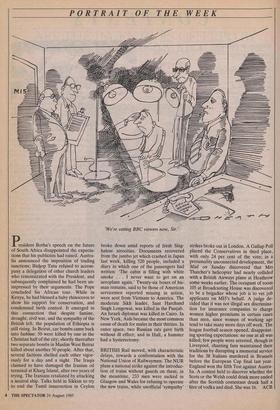 resident Botha's speech on the future of South Africa disappointed the expecta- tions that his publicists had raised. Austra- lia announced the imposition of trading sanctions; Bishop Tutu refused to accom- pany a delegation of other church leaders who remonstrated with the President, and subsequently complained he had been. un- impressed by their arguments. The Pope concluded his African tour. While in Kenya, he had blessed a baby rhinoceros to show his support for conservation, and condemned birth control. It emerged in this connection that despite famine, drought, civil war, and the sympathy of the British left, the population of Ethiopia is still rising. In Beirut, car bombs came back into fashion: 50 were killed by one in the Christian half of the city; shortly thereafter two separate bombs in Muslim West Beirut killed about another 50 people. After that, several factions shelled each other vigor- ously for a day and a night. The Iraqis claimed to have damaged the Iranian oil terminal at Kharg Island, after two years of trying. The Iranians retaliated by attacking a neutral ship. Talks held in Sikkim to try to end the Tamil insurrection in Ceylon broke down amid reports of fresh Sing- halese atrocities. Documents recovered from the jumbo jet which crashed in Japan last week, killing 520 people, included a diary in which one of the passengers had written: 'The cabin is filling with white smoke . . . I never want to get on an aeroplane again.' Twenty-six boxes of hu- man remains, said to be those of American servicemen reported missing in action, were sent from Vietnam to America. The moderate Sikh leader, Sant Harchand Singh Longowal, was killed in the Punjab. An Israeli diplomat was killed in Cairo. In New York, Aids became the most common cause of death for males in their thirties. In outer space, two Russian rats gave birth without ill effect; and in Hull, a hamster had a hysterectomy.

BRITISH Rail moved, with characteristic delays, towards a confrontation with the National Union of Railwaymen. The NUR plans a national strike against the introduc- tion of trains without guards on them; in the meantime, 233 men were sacked in Glasgow and Wales for refusing to operate the new trains, while unofficial 'sympathy' strikes broke out in London. A Gallup Poll placed the Conservatives in third place, with only 24 per cent of the vote; in a presumably unconnected development, the Mail on Sunday discovered that Mrs Thatcher's helicopter had nearly collided with a British Airways plane at Heathrow sothe weeks earlier. The occupant of room 105 at Broadcasting House was discovered to be a brigadier whose job is to vet job applicants on MI5's behalf. A judge de- cided that it was not illegal sex discrimina- tion for insurance companies to charge women higher premiums in certain cases than men, since women of working age tend to take many more days off work. The league football season opened, disappoint- ing sporting expectations: no one at all was killed; few people were arrested, though in Liverpool, chanting fans maintained their traditions by disrupting a memorial service for the 38 Italians murdered in Brussels before the European Cup final last year. England won the fifth Test against Austra- lia. A contest held to discover whether the Scots or the Welsh could drink more ended after the Scottish contestant drank half a litre of vodka and died. She was 16. ACB