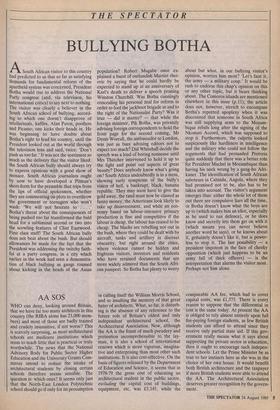 ASouth African visitor to this country had predicted to us that so far as satisfying demands for fundamental reform of the apartheid system was concerned, President Botha would rise to address the National Party congress (and, via television, his international critics) to say next to nothing. The visitor was clearly a believer in the South African school of bullying, accord- ing to which one doesn't disapprove of intellectuals, kaffirs, Alan Paton, poofters and Picasso; one kicks their heads in. He was beginning to have doubts about Botha's right to lead his country, until the President looked out at the world through the television lens and said, twice: 'Don't Push us too far.' It was not the sentiment so much as the delivery that the visitor liked: the South African bully should always try to express opinions with a good show of menace. South African journalists ought by now to have developed a Pitman's short-form for the preamble that trips from the lips of official spokesmen, whether they are commenting on plots to overthrow the government or teenagers who won't wash: 'We will not hesitate to . . . .' Botha's threat about the consequences of being pushed too far transformed the bald head for a subliminal second or two into the scowling features of Clint Eastwood. First class stuff! The South African bully does not beat about the bush. But should allowances be made for the fact that the President was addressing the twitchy faith- ful at a party congress, in a city which earlier in the week had seen a demonstra- tion of black bullying as gangs roamed about kicking in the heads of the Asian population? Robert Mugabe once ex- plained a burst of outlandish Marxist rhet- oric by saying that he could hardly be expected to stand up at an anniversary of Karl's death to deliver a speech praising Winston Churchill. Was Botha cunningly concealing his personal zeal for- reform in order to fool the jackboot brigade in and to the right of the Nationalist Party? Was it true — did it matter? — that while the foreign minister, Pik Botha, was privately advising foreign correspondents to hold the front page for the second coming, Mr Denis Worrall, the ambassador to London, was just as busy advising editors not to expect too much? Did Whitehall decide the speech was a load of boring nonsense until Mrs Thatcher intervened to hold it up to the light and point out aspects of great beauty? Does anybody know what's going on? South Africa undoubtedly is in a mess, showing early symptoms of the bully's vision of hell, a bankrupt, black, banana republic. They may soon have to give the gold away, the rand must now be classed as funny money, the Americans look likely to take up disinvestment, and while an eco- nomy based on labour-intensive primary production is fine and competitive if the labour is cheap, the labour has ceased to be cheap. The blacks are rebelling not out in the bush, where they could be dealt with by aircraft, tanks and artillery in discreet obscurity, but right around the cities, where violence cannot be hidden and frightens visitors, investors and residents who have retained documents that are more widely admired than the South Afri- can passport. So Botha has plenty to worry about but what, in our bullying visitor's opinion, worries him most? 'Let's face it, the army — a military coup.' It would be rash to endorse this chap's opinion on this or any other topic, but it bears thinking about. The Comoros islands are mentioned elsewhere in this issue (p.11); the article does not, however, stretch to encompass Botha's reported apoplexy when it was discovered that someone in South Africa was still supplying arms to the Mozam- bique rebels long after the signing of the Nkomati Accord, which was supposed to stop it. Furthermore, the culprits looked suspiciously like hardliners in intelligence and the military who could not follow the arguments that had persuaded Pretoria quite suddenly that there was a better role for President Machel in Mozambique than having his neck wrung by a gung-ho Afri- kaner. The identification of South African saboteurs in Cabinda, Angola, where they had promised not to be, also has to be taken into account. The visitor's argument emerges thus: either the whole lot of them out there are compulsive liars all the time, or Botha doesn't know what the boys are up to (which makes him an idiot, especially as he used to run defence), or he does know and secretly lets them get on with it (which means you can never, believe another word he says), or he knows about it, genuinely doesn't like it, but is power- less to stop it. The last possibility — a president impotent in the face of cheeky opposition (which just happens to be an army full of thick officers) — is the interpretation that alarms the visitor most. Perhaps not him alone.