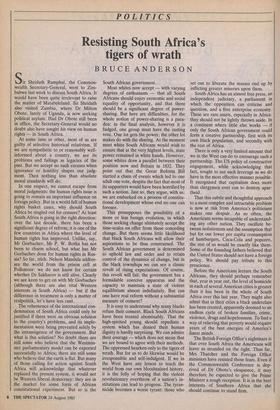 Sir Shridath Ramphal, the Common- wealth Secretary-General, went to Zim- babwe last week to discuss South Africa. It would have been quite irrelevant to raise the matter of Matabeleland. Sir Shridath also visited Zambia, where Dr Milton Obote, lately of Uganda, is now seeking political asylum. Had Dr Obote still been in office, the Secretary-General would no doubt also have sought his view on human rights — in South Africa.

At some time or other, most of us are guilty of selective historical relativism. If we are sympathetic to or reasonably well- informed about a country, we see its problems and failings as legacies of the past. But we accept no such excuses when ignorance or hostility shapes our judg- ment. Then nothing less than absolute moral standards will do.

In one respect, we cannot escape from moral judgments: the human rights issue is going to remain an important influence on foreign policy. But in a world full of human rights basket cases, why should South Africa be singled out for censure? At least South Africa is going in the right direction: over the last decade, there has been a significant degree of reform; it is one of the few countries in Africa where the level of human rights has improved. Unlike, say, Mr Gorbachev, Mr P. W. Botha has not been to charm school, but what has Mr Gorbachev done for human rights in Rus- sia? So far, zilch. Nelson Mandela addres- ses the world from the prison cell at Pollsmoor: we do not know for certain whether Dr Sakharov is still alive. Clearly we are keen to get on with Mr Gorbachev (although there are also vital Western interests in South Africa) — but if the difference in treatment is only a matter of realpolitik, let's have less cant.

The vehemence of the international con- demnation of South Africa could only be justified if there were an obvious solution to the country's problems, and its imple- mentation were being prevented solely by the intransigence of the government. But what is this solution? No doubt there are still some who believe that the Westmin- ster parliamentary model can be exported successfully to Africa; there are still some who believe that the earth is flat. But many of those calling for action against South Africa will acknowledge that whatever replaced the present system, it would not be Western liberal democracy: they are in the market for some form of African constitutional experiment. But so is the South African government.

Most whites now accept — with varying degrees of enthusiasm — that all South Africans should enjoy economic and social equality of opportunity, and that there should be a significant degree of power- sharing. But here are difficulties, for the whole notion of power-sharing is a para- dox: in the final analysis, however it is fudged, one group must have the casting vote. One lot gets the power; the other lot makes do with the sharing. At the moment most white South Africans would wish to ensure that at the very highest levels, state power remained in white hands. However, some whites draw a parallel between their position now and Britain in 1832. They point out that the Great Reform Bill started a chain of events which led to one adult one vote, despite the fact that most of its supporters would have been horrified by such a notion. Just so, they argue, with us: we are embarked on a process of constitu- tional development whose end no one can foresee.

This presupposes the possibility of a more or less benign evolution, in which those seeking change ultimately accept the time-scales on offer from those conceding change. But there seems little likelihood that black South Africans will allow their aspirations to be thus constrained. The South African government is determined to uphold law and order and to retain control of the dynamics of change, but in the black townships we can see a classic revolt of rising expectations. Of course, this revolt will fail: the government has a formidable coercive apparatus and the capacity to maintain a state of violent equilibrium almost indefinitely. But can one have real reform without a substantial measure of consent?

It is easy to understand why many blacks refuse their consent. Black South Africans have been treated abominably. That the high-spirited young should repudiate a system which has denied their human dignity is hardly surprising. We can admire their courage — which does not mean that we are bound to agree with their methods. The oppressed hearken only to the tigers of wrath. But for us to do likewise would be irresponsible and self-indulgent. If we in the West have any lesson to teach the world from our own bloodstained history, it is the folly of hoping that the violent revolutionary overthrow of a nation's in- stitutions can lead to progress. The tyran- nicide becomes a worse tyrant: those who set out to liberate the masses end up by inflicting greater miseries upon them.

South Africa has an almost free press, an independent judiciary, a parliament in which the opposition can criticise and question, and a free enterprise economy. These are rare assets, especially in Africa: they should not be lightly thrown aside. In a continent where little else works — if only the South African government could form a creative partnership, first with its own black population, and secondly with the rest of Africa.

There is only a very limited amount that we in the West can do to encourage such a partnership. The US policy of constructive engagement, while acknowledging that fact, sought to use such leverage as we do have in the most effective manner possible. It recognised that capitalism does more than clergymen ever can to destroy apar- theid.

That this subtle and thoughtful approach to a most complex and intractable problem is now at risk from America's politicians makes one despair. As so often, the Americans seems incapable of understand- ing any other nation. They oscillate be- tween isolationism and the assumption that but for our lower per capita consumption of hamburgers, Coca-Cola and popcorn, the rest of us would be exactly like them. Some of the founding fathers believed that the United States should not have a foreign policy. We should pay tribute to this prescience.

Before the Americans lecture the South Africans, they should perhaps remember that, year in year out, the level of homicide in each of several American cities is greater than it has been in the whole of South Africa over this last year. They might also admit that in their cities a black underclass has been created, apparently doomed to an endless cycle of broken families, crime, violence, drugs and hopelessness. To find a way of relieving that poverty would require years of the best energies of America's finest minds.

The British Foreign Office's nightmare is that over South Africa the Americans will leave us stranded on the right. Thus far, Mrs Thatcher and the Foreign Office ministers have resisted those fears. Even if the Commonwealth Conference is dep- rived of Dr Obote's eloquence, it may therefore be expected to give the Prime Minister a rough reception. It is in the best interests of Southern Africa that she should continue to stand firm.