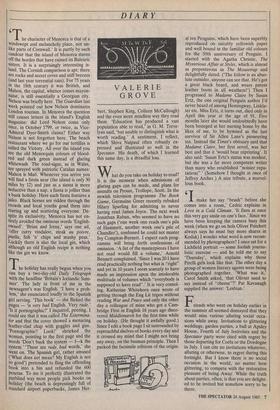 VALERIE GROVE The character of Menorca is that of a windswept and melancholy place, not un- like parts of Cornwall.' It is partly by such candour that the island of Menorca staves off the hordes that have ruined its Balearic sisters. It is a surprisingly interesting is- land. The Cornish comparison is apt: there are rocks and secret coves and stiff breezes (and last year torrential rain). For 75 years in the 18th century it was British, and Mahon, the capital, whence comes mayon- naise, is still essentially a Georgian city. Nelson was briefly here. The Guardian last Week pointed out how Nelson dominates London tourism. In Menorca the question still causes letters in the island's English magazine: did Lord Nelson come only once, in October 1799, or twice, as Vice- Admiral Dyer-Smith claims? Either way Nelson is not forgotten here. The beach restaurant where we go for our tortillas is called the Victory. All over the island you see the old Menorquin colours of blood- red and dark green instead of glaring Whitewash. The road-signs, as in Wales, are sprayed with patriotic Catalan names: Mahon is Mao. Whenever you arrive you Will find a fiesta near (the island is only 30 miles by 12) and just as. a siesta is more seductive than a nap, a fiesta is jollier than a bank holiday. Here each fiesta features a faleo. Black horses are ridden through the Crowds and local youths goad them into rearing up and scattering everyone. De- spite its exclusivity, Menorca has not en- tirely avoided the ominous words 'English- owned'. 'Brian and Irene,' says one ad, 'offer curry vindaloo, steak au poivre, Paella, fish 'n' chips and mushy peas.' Luckily there is also the local gin, which although an old English recipe is nothing like the gin we know.

The holiday has really begun when you can buy a two-day-old Daily Telegraph With the headline 'Britain's Icelandic Sum- mer'. The lady in front of me in the newsagent's was English. 'I have a prob- lem,' she enunciated loudly to the Spanish girl serving. 'This book' — she flicked the pages — 'is very bad English. Very rude.' Is it pornographic?' I inquired, peering. I could see that it was called The Extermina- tor and that the cover showed a menacing leather-clad chap with goggles and gun. 'Pornographic? Look!' shrieked the woman, pointing to the first page and the words 'Don't buck the system — f—k the System.' These are rude, bad words,' she Went on. The Spanish girl, rather amused ('What does eet mean? My English is not so good') pretended to fling the offending book into a bin and refunded the 600 Pesetas. To me it perfectly illustrated the purblind way most people pick books on holiday (the beach is depressingly full of standard airport paperbacks, James Her- bert, Stephen King, Colleen McCullough) and the even more mindless way they read them. 'Education has produced a vast population able to read,' as G. M. Treve- lyan said, 'but unable to distinguish what is worth reading.' A sentiment, I reflect, which Shiva Naipaul often robustly ex- pressed and illustrated so well in the Spectator. His death, of which I learned this same day, is a dreadful loss.

What do you take on holiday to read? It is the moment when admissions of glaring gaps can be made, and plans for assaults on Proust, Trollope, Scott. In the newish television programme The Book Game, Germaine Greer recently rebuked Hilary Spurting for admitting to never having read James Joyce. The next week Jonathan Raban, who seemed to have no such gaps Cone week one reads one's pile of Hammett, another week one's pile of Chandler), confessed he could not master Ivy Compton-Burnett. I expect each prog- ramme will bring forth confessions of omission. 'A list of the masterpieces I have not read would fill a volume,' Arnold Bennett complained. 'Since I was 20 I have read practically nothing but what is "right" and yet in 10 years I seem scarcely to have made an impression upon the intolerable multitude of volumes which "everybody is supposed to have read": It is very consol- ing. Katherine Whitehorn once wrote of getting through the Eng Lit tripos without reading War and Peace and only the other day a colleague of mine who got a Cam- bridge First in English 18 years ago disco- vered Middlemarch for the first time while on holiday. (He thought it awfully good.) Since I edit a book page I sit surrounded by reproachful shelves of books every day and it crossed my mind that I might not bring any away, on the busman principle. Then I packed the facsimile editions of the origin- al ten Penguins, which have been superbly reproduced on suitably yellowish paper and well bound in the familiar old colours for the 50th anniversary of Penguin. I started with the Agatha Christie, The Mysterious Affair at Styles, which is almost as preposterous as The Mousetrap and delightfully dated. ('The fellow is an abso- lute outsider, anyone can see that. He's got a great black beard, and wears patent leather boots in all weathers!) Then I progressed to Madame Claire by Susan Ertz, the one original Penguin author I'd never heard of among Hemingway, Linkla- ter etc. Miss Ertz, it turns out, died only in April this year at the age of 91. Five months later she would undoubtedly have been besieged at her nursing home by the likes of me, to be hymned as the last survivor of Sir Allen Lane's pioneering ten. Instead the Times's obituary said that Madame Claire, her first novel, was her best and that it 'would bear reprinting'. It also said: 'Susan Ertz's status was modest, but she was a far more competent writer than many who established "noisier repu- tations".' (Somehow I thought at once of Jeffrey Archer.) A nice tribute, a marvel- lous book.

Imake her say "brush" before she comes into a room,' Cedric explains in Love in a Cold Climate. 'It fixes at once this very gay smile on one's face.' Since we have been keeping the camera busy this week (when we go on hols Oliver Pritchett always says he must buy more shares in Kodak) I wonder what word is now recom- mended by photographers? I once sat for a Lichfield portrait — some foolish journa- listic exercise — and he told me to say 'Thursday', which explains why those Pirelli girls look like that. The other day a group of women literary agents were being photographed together. 'What was it,' Carol Smith asked, 'that Olivier used to say instead of "cheese"?' Pat Kavanagh supplied the answer: 'Lesbian.'

Friends who went on holiday earlier in the summer all seemed dismayed that they would miss various alluring social occa- sions while away. Invitations to glittering weddings, garden parties, a ball at Apsley House, Fourth of July festivities and the Spectator party were cited with regret by those departing for Corfu or the Dordogne in July. I can cite no invitations whatever, alluring or otherwise, to regret during this fortnight. But I know there is no social occasion in the world, no matter how glittering, to compete with the restorative pleasure of being Away. While the truth about parties, often, is that you are delight- ed to be invited but somehow sorry to be there.