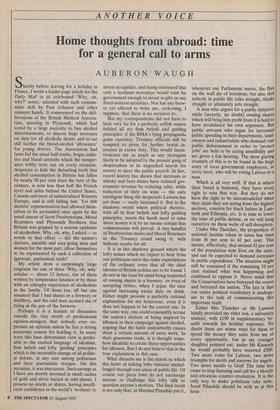 Home thoughts from abroad: time for a general call to arms

hortly before leaving for a holiday in France, I wrote a leader page article for the Daily Mail in its celebrated 'Why, oh, why?' series, adorned with such consum- mate skill by Paul Johnson and other eminent hands. It commented on the deli- berations of the British Medical Associa- tion, meeting in Plymouth, which had voted by a large majority to ban alcohol advertisements, to impose huge increases on duty for all alcoholic drinks and to cut still further the blood-alcohol 'allowance' for young drivers. The Association had been fed the usual half-truths, bogus statis- tics and bland untruths which the temper- ance lobby trots out on every occasion, desperate to hide the disturbing truth that alcohol consumption in Britain has fallen by nearly 50 per cent since the turn of the century, is now less than half the French level and miles behind the United States, Canada and most of industrialised Western Europe, and is still falling fast. Yet 600 doctors' representatives had allowed them- selves to be persuaded once again by the usual caucus of Scots Presbyterians, Moral Rearmers and Plymouth Brethren that Britain was gripped by a serious epidemic of alcoholism. Why, oh, why, I asked — or words to that effect — did the nation's doctors, amiable and easy-going men and women for the most part, allow themselves to be represented by such a collection of ignorant, puritanical turds?

My article drew a surprisingly large response for one of these 'Why, oh, why' articles — about 12 letters, ten of them written by temperance fanatics or by those with an unhappy experience of alcoholism in the family. Of those ten, all but one assumed that I had shares in a brewery or distillery, and the odd man accused me of being in the pay of the brewers.

Perhaps it is a feature of discussion outside the tiny world of professional opinion-mongers that nobody ever ex- presses an opinion unless he has a strong economic reason for holding it. In many ways this base determinist view is prefer- able to the exalted language of idealism, firm beliefs and lofty 'guiding' principles which is the invariable change of all politic- al debate, at any rate among politicians and their journalistic stooges. On this occasion, it was inaccurate. Such savings as I have are mostly invested in small caches of gold and silver buried in odd places. I possess no stocks or shares, having insuffi- cient confidence in the world's 'workers' to invest in equities, and being convinced that only a madman nowadays would trust his government enough to invest in gilts or any fixed-interest securities. Nor has any brew- er yet offered to bribe me, reckoning, I suppose, that there is no occasion to.

But my correspondents did not have to look very far for a perfectly selfish reason behind all my firm beliefs and guiding principles: if the BMA's lying propaganda gains currency, Treasury officials will be tempted to press for further brutal in- creases in excise duty. This would incon- venience me as much as any stratagem likely to be adopted by the present gang of desperadoes in its anguished search for money to meet the public payroll. In fact, recent history has shown that increases in whisky and beer duties have reduced gov- ernment revenue by reducing sales, while reduction of duty on wine — the only intelligent thing the desperado Lawson has yet done — vastly increased it. But in the shadowy world where political rhetoric, with all its firm beliefs and lofty guiding principles, meets the harsh need to raise more money it is by no means certain that commonsense will prevail. A tiny handful of Presbyterian moles and Moral Rearmers in the Treasury could swing it, with hideous results for all.

It is in this shadowy ground where the lofty noises which we expect to hear from our politicians meet the ruder expectations of the ordinary voter that all the chief idiocies of British politics are to be found. I do not in the least bit mind being suspected of owning shares in a brewery, or even of accepting bribes, when I argue the case against increasing excise duty on drink. Either might provide a perfectly rational explanation for my behaviour, even if it does not happen to be the correct one. In the same way, one could reasonably accuse the nation's doctors of being inspired by idleness in their campaign against alcohol, arguing that the habit undoubtedly causes them a certain amount of extra work. In their gruesome trade, it is thought some- how idealistic to create these opportunities for idleness. But I do not believe that is the true explanation in this case.

What disturbs me is the extent to which this habit of talking lofty remains unchal- lenged through vast areas of public life. Of course our press laws do not encourage anyone to challenge this lofty talk or question anyone's motives. The final result is not only that, as Marshal Pilsudski put it, whenever our Parliament meets, the flies on the wall die of boredom; but also that nobody in public life talks straight, thinks straight or ultimately acts straight. A man who argues for a public initiative while (secretly, no doubt) owning shares which will bring him profit from it is held to have invalidated his own argument. But public servants who argue for increased public spending in their departments, land- owners and industrialists who demand vast public disbursement in order to 'protect jobs' are held to be acting unselfishly and are given a fair hearing. The most glaring example of this is to be found in the huge army of local government employees, at every level, who will be voting Labour to a man.

Which is all very well. If that is where their bread is buttered, they have ever)' right to vote that way. But they do not have the right to be uncontradicted when they claim they are acting from the highest motives, concern for black babies in Lam- beth and Ethiopia, etc. It is time to lower the tone of public debate, or we will hang ourselves on these webs of self-deception. Under Mrs Thatcher, the proportion of national income taken in taxes has risen from 36 per cent to 42 per cent. This means, effectively, that around 42 per cent of the population now lives on the state, and can be expected to demand increases in public expenditure. The situation might still be contained if the remaining 58 per cent realised what was happening and combined to oppose it. Never mind that the Conservatives have betrayed the voters and betrayed the nation. The fact is that our entire political vocabulary is inadequ- ate to the task of communicating this important truth.

Either Mrs Thatcher or Mr Lawson kindly provided my elder son, a university student, with £190 in supplementary be- nefit towards his holiday expenses. No doubt there are worse ways for them to spend the money they seize from me at every opportunity, but as my younger daughter pointed out, under Mr Kinnock he would probably have received £300. Two more votes for Labour, two more triumphs for devils and sorrows for angels. Two more insults to God! The time has come to stop listening and call for a bloody and atrocious counter-revolution. It is the only way to make politicans take note. Jozef Pilsudski should be with us at this hour.